This process relies heavily on fungi and bacteria which work individually and form symbiotic relationships with plants and animals.

By Richard Hassall on 21st February 2012 in Ecology 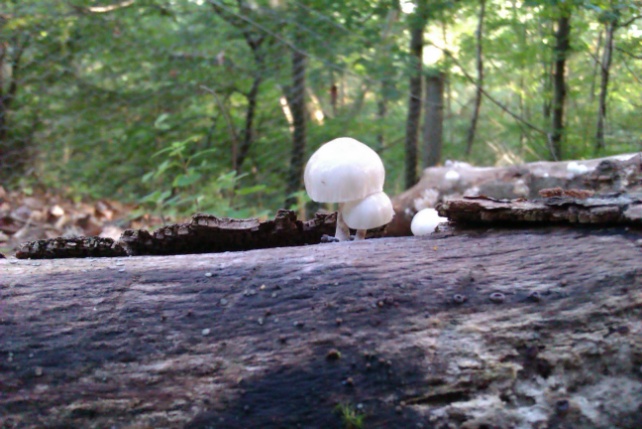 In autumn deciduous trees shed their dead leaves, which blanket the woodland floor. Every year these trees do exactly the same thing and yet we not ear deep in dead leaves. Fortunately there are a wide variety of organisms that convert this dead matter back into compounds that can be absorbed by plants again. So how is a leaf transformed into the nutrients that will be recycled back into the ecosystem? This process relies heavily on fungi and bacteria which work individually and form symbiotic relationships with plants and animals. The term “symbiotic” describes a relationship in which both parties benefit from working together.

Here is one example of how a dead leaf may be broken down. It begins with the leaf falling to the ground where it is fragmented by “shredders” or detritivores. These are insects, such as woodlice and slugs, which feed on dead leaves. At this first stage bacteria are already present. Shredders often have a symbiotic relationship with microorganisms living in their digestive system, such as cellulose. These aid the digestion of materials that would otherwise be impossible for the insects.

Now that the dead leaf has been broken up into fragments the surface area has increased and can now be acted on by fungi and bacteria.  They are essential to decomposition. Many different types of fungi and bacteria will gradually break down the leaf, as each will specialise in certain chemicals. Eventually only the skeleton of the leaf will remain. This is where a group of fungi come in which have a special ability to break down a chemical in wood, which makes up the skeleton of a leaf, called lignin.

Once this whole cycle is complete all that is left of the leaf is the simple inorganic compounds that made up its structure, such as carbon dioxide, nitrogen and water. These compounds are now readily available to be absorbed by plants again. This process also involves fungi as they form symbiotic relationships with plants by integrating with their root systems, allowing plants to directly absorb nutrients from the vast network of fungi carrying out decomposition. You can read about this in further detail in my one of my previous articles “Fungi: the hidden helper of our woodlands.”

This scenario only just scrapes the surface of how this incredibly complex process allows dead material to be recycled. It shows just how important insects, fungi and bacteria are in a woodland ecosystem. Without this constant stream of nutrients being fed back into the soil, trees would struggle to survive and so would all of the organism that depend on them.