Home › Articles & Blogs › P is for Psyllids vs Psocids

P is for Psyllids vs Psocids

Both are rather small insects, with somewhat stereotypically protruding ‘bug’ eyes, and also share the habit of folding their wings up over their backs in a tent-like arrangement. 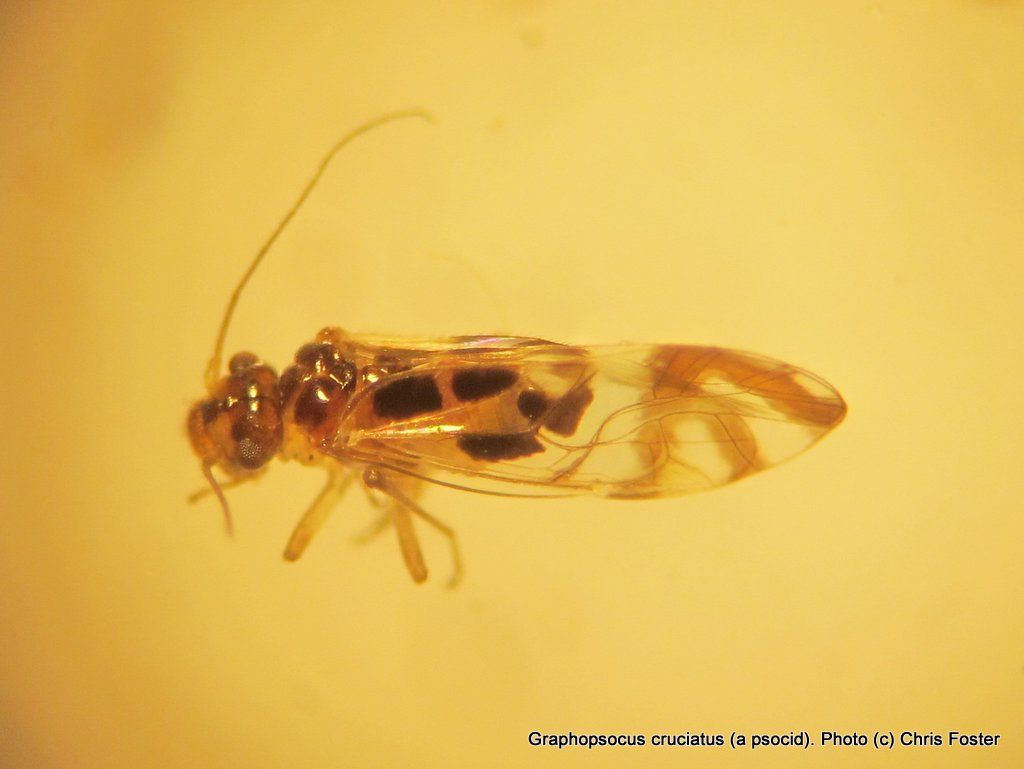 I suspect the vast majority of non-insect enthusiasts have never heard of either psyllids or psocids. Even bug lovers tend to overlook them. Yet these two abundant insect groups – each numbering around 100 species in the UK – are, I think, actually quite charming.  Both are rather small insects, with somewhat stereotypically protruding ‘bug’ eyes, and also share the habit of folding their wings up over their backs in a tent-like arrangement.

Psyllids are colloquially known as jumping plant lice. It’s a common name that is triply appropriate: they do indeed jump, leaping from danger with an impressively rapid spring; they are often associated with a single species of food plant; and whilst they are not actually lice – they are bugs, in the sub-order Stenorynchha with aphids, scales and whitefly – I can see how their phloem feeding habits (essentially meaning that they eat the living tissue of plants) might have led them to be labelled, by gardeners, as a pest insect in the same vein as true lice. They can also transmit plant diseases such as Citrus Greening, meaning that poor little psyllids are often quite unwelcome wherever they go.

When you find one, precise identification to species level can be tricky based on the specimen alone. For example, see this excerpt from the British Bugs website:

“Note that body colouring is often very variable within an individual and within species, with many species changing from green or yellow to red, brown and black over the course of several months. Wing venation and spinules, together with the genitalia and the genal cones, provide the best identification cues in many cases.”

How very promising! Luckily, the host-specific nature of most psyllids makes identification much easier. If you happen to know what sort of plant your specimen was found on, the potential range of psyllid species will, with any luck, be much narrower. Though I should add a note of caution here: I initially identified the psyllid pictured above as Trioza flavipennis, based on the fact that it was sat on ground elder close to what appeared to be some of the galls produced by that species. In actual fact it is more likely to be Psylla alni, the alder psyllid – which must have dropped in from a nearby tree to confuse the unwary (like me).

Trioza flavipennis remains, then, a pretty scarce creature in Britain, which is bad news for gardeners: ground elder can be a troublesome weed. This hints at a possible rehabilitation for psyllids, which would be to set them on the wrong sort of plants. One example from a few years ago was the first trial release of a Japanese psyllid, Aphalara itadori, which feeds exclusively on that most troublesome of invasive plants, Japanese knotweed. 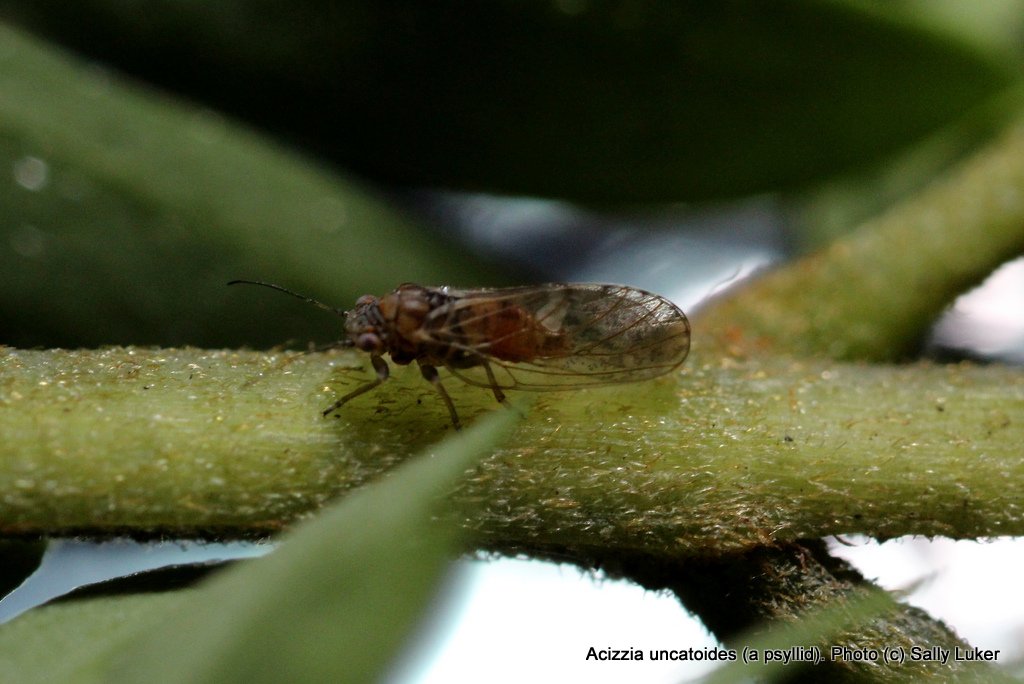 Psocids also suffer under the auspices of an unfortunate common name, ‘Bookworms’ or ‘Booklice’. This derives from a few species, usually found inside buildings, that sometimes feed on the glue in book bindings. The majority of Psocid species in Britain are found outdoors and most of these are winged. Often found on or under the bark of trees, as well as abundantly within the canopy, this gave rise to the name ‘Barklice’ – but since the word ‘lice’ has, as I’ve mentioned, fairly negative connotations with the general public, Keith Alexander (who runs the national recording scheme for these insects) proposed, in 2003, that the name ‘Barkflies’ be used for the arboreal psocid species.

Despite the fine efforts of contributors to the recording scheme, it appears that psocids, like psyllids, remain under-recorded. This is something of a shame, since psocids are so widespread and abundant that I wouldn’t be surprised if they represented a pretty important slice of the invertebrate pie in some habitats. Shake a single branch of almost any tree, and it’s most likely that a handful of the insects dislodged will be psocids. So they are, in fact, easy to find despite the sizeable gaps in our knowledge of their ecology and distribution in the United Kingdom, and with so much to learn, psocids are potentially a very promising group for further study. 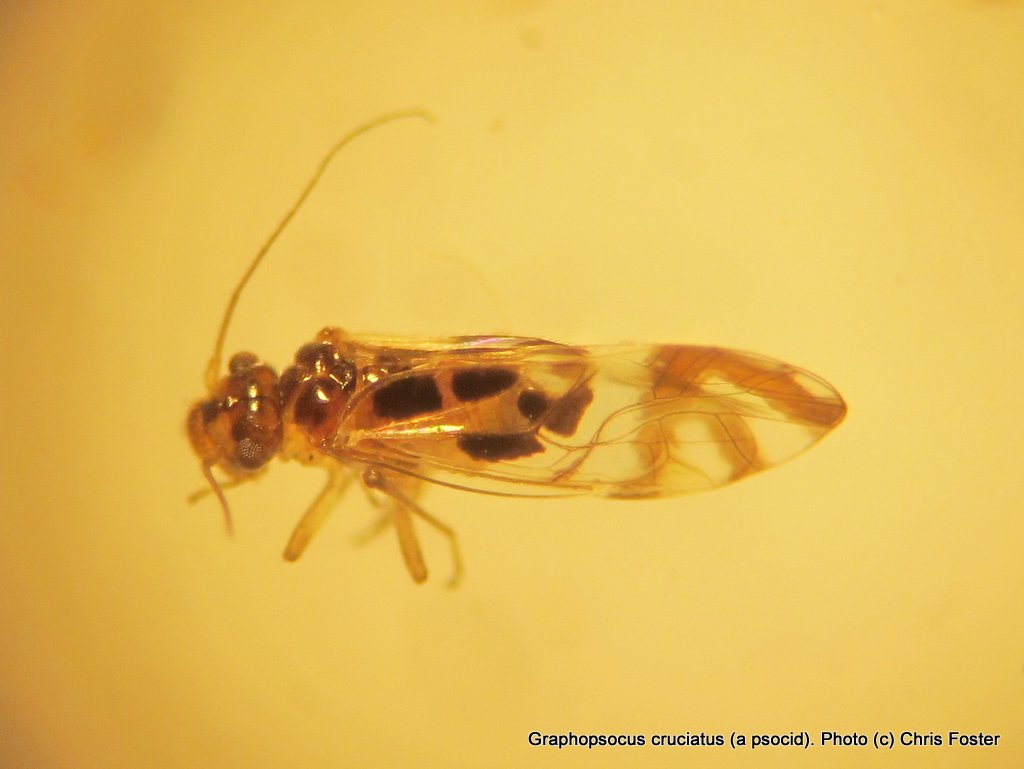 Thanks to Sally Luker for some of the details on psyllids in the UK. Sally is a PhD student at the University of Exeter, investigating how non-native, plant-eating insect species, including psyllids, integrate in native interaction networks.