Scorpionflies make fast, direct, whirring flights that are characteristically stop-start – darting off in a perfectly straight line and then dropping suddenly back into a resting posture. 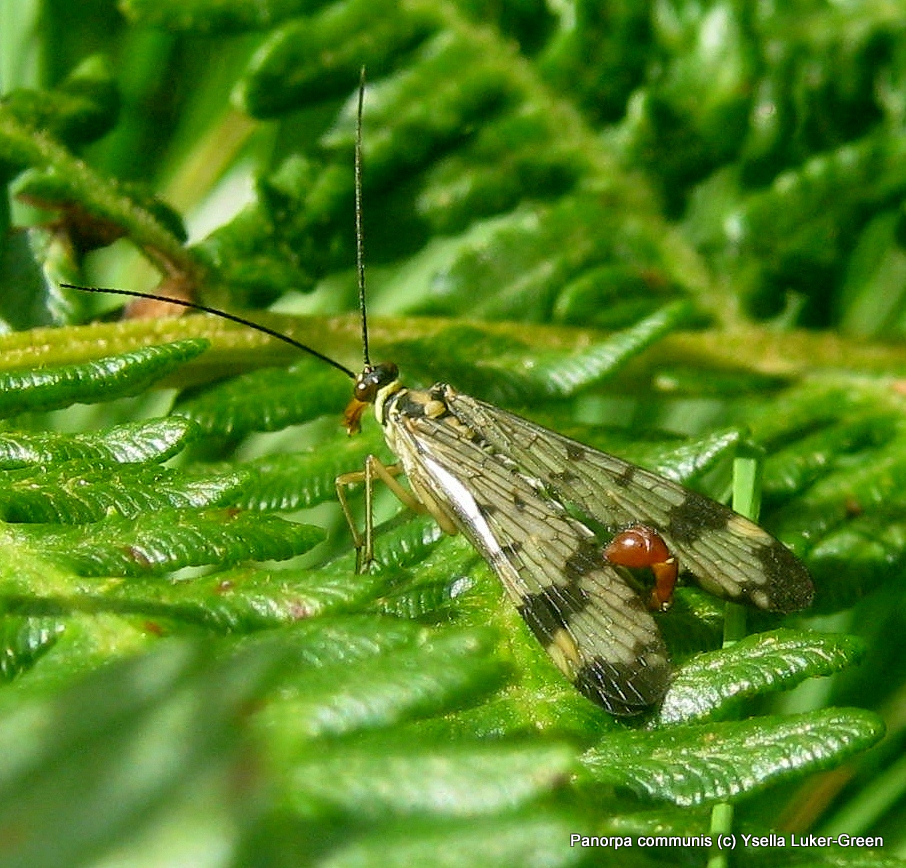 One of the more entertaining assignments during my MSc at Reading University a few years ago was to keep a ‘Wildlife Logbook’. This was to be a written (and often hand-illustrated) account of our personal engagement with wildlife: what we saw, how we felt about it, what we’d learned. I sketched a few birds, made a few twee notes. Occasionally I threw in a bad drawing of an insect or spider, of much the same quality a six-year-old would achieve in school, just to prove I had an iota of interest in creatures that lacked feathers.

The prize winning logbook in my cohort – yes, it was a competition! – was an astonishingly rich and detailed account of a year’s doorstep invertebrate safaris, illustrated with accomplished pencil sketches and brilliant macro photography. One such image was of a scorpionfly. I could hardly conceive that such a creature existed, unseen and unknown, right under my nose. That beak! Those bold stripy wings! That…stingy thing! Whatever it is. Did I ever want to see a scorpionfly! I had already resolved to give insects a closer look. Perhaps if I was careful, and fortunate, I might get close to one, though I didn’t think it likely.

I soon figured out that I hadn’t been looking very hard at all. Scorpionflies turn out to be relatively common creatures, if rather shy; they are apt to wing off at the first sign of a camera lens being raised in their direction. Much as I’ve found with many birds in the past: see one, and others will surely follow. Learning to appreciate the distinctive shape and behaviour of an animal – what birders call its ‘jizz’ – helps to pick one out from a crowded, confusing visual field. Scorpionflies make fast, direct, whirring flights that are characteristically stop-start – darting off in a perfectly straight line and then dropping suddenly back into a resting posture. If I see an insect do this out of the corner of my eye, my first thought is usually scorpionfly. 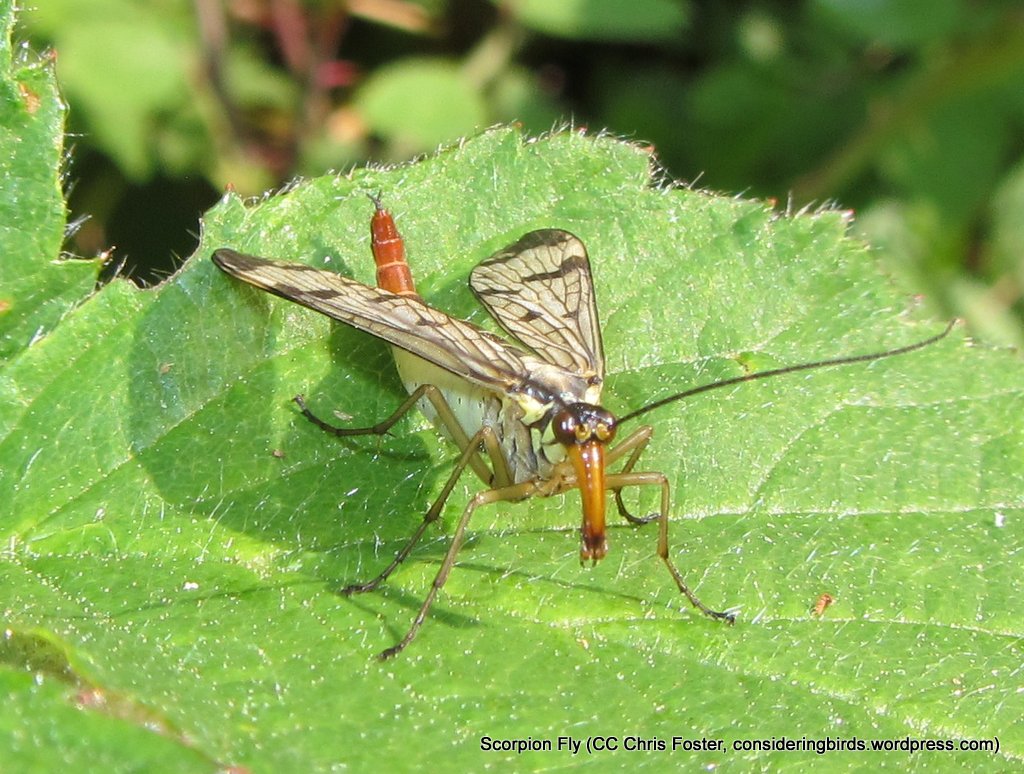 And what exactly are they, these outlandish looking beasts? Interestingly enough, they are of an ancient line – the order Mecoptera – that may be at least 250 million years old. It is the same as that of the very first insect pollinators, which predate modern flowering plants, and from which the more contemporary orders Diptera (flies), Lepidoptera (moths and butterflies) and Trichoptera (caddis flies) are all thought to have evolved.

Today’s scorpionflies use that terrifying looking beak to eat other insects, but mostly ones that are already dead – they’re scavengers; the kites or vultures of the invertebrate world, if you like. The three species found in Britain are all in the genus Panorpa and have in common a yellow and black striped body, orange-red tipped abdomen and strikingly patterned wings. Whilst the particular pattern varies somewhat from species to species, the only way to tell them apart for sure is by examining the structure of a male’s ‘scorpion sting’ – actually part of his genitalia! A sharp close-up photograph or examination of a specimen is usually required to get a firm ID.

Now that I know a few facts, and am fairly confident of seeing a few scorpionflies every summer, have these insects lost their mystique? Far from it. However much or little I know, any encounter with something as extreme in appearance as a scorpionfly will always be memorable. And if they ever do become mundane, there will always be something else out there, right at the limit of imagination and possibilities. Snakeflies, for example. Do I ever want to see one of those!