Known to impact native plant species, invertebrate populations and soil nutrients, it has also been noticed that in areas with Japanese stiltgrass, numbers of American toads have fallen.

By Alex Taylor on 3rd September 2014 in Ecology, Invasive Species 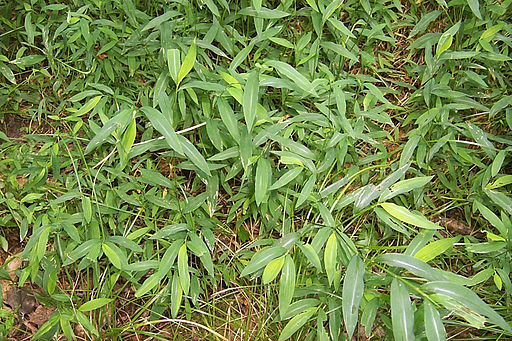 Japanese stiltgrass is one of the world’s most pervasive invasive species. Accidentally introduced to the USA in the early 1900s, it has now spread to more than a dozen states within the past 100 years, particularly in the southeast of the country. It can survive in widely diverse ecosystems and is typically found along roads and in forests. Known to impact native plant species, invertebrate populations and soil nutrients, it has also been noticed that in areas with Japanese stiltgrass, numbers of American toads have fallen.

It was initially suspected that the grass was reducing the toads’ food supply by reducing insect populations, as few native insects eat Japanese stiltgrass. However, scientists from the University of Georgia discovered the real reason, as they found that the number of wolf spiders was higher in invaded areas, and the wolf spiders were preying on the toads.

Their study, published in the journal Ecology, reports that wolf spiders thrive in the invasive grass. Spiders actually eat other spiders, and keep populations in check. The Japanese stiltgrass however, provides the cannibalistic spiders with a refuge from one another, and therefore causes an accumulation of predatory spiders which feed on small toads that have recently emerged from wetlands. Wherever the grass grows, American toad survival decreases.

John Maerz, one of the authors from the University’s Warnell School of Forestry and Natural Resources, said: “The grass is degrading the best forests for young toad survival…the invasive grass affects toads by changing interactions among native species rather than the grass having a direct effect on the native toads.”

Jayna Devore, who led the study, added: “Ecosystems are so incredibly complex that it can be surprisingly difficult to foresee just how environmental changes, such as an invasion, will affect organisms living in affected areas. I think that one of the unique things about this study is that it not only documents the fact that this plant invasion reduces the survival of a native species, but also determines the mechanism through which that occurs.”

The scientists made their findings by creating cages where they could control the presence of both stiltgrass and spiders. In the presence of stiltgrass, spider densities were found to be 33% higher and toad survival decreased by 65%. Stiltgrass alone, without the presence of spiders, had no impact on toad survival. “Spiders are actually tremendously important and incredibly abundant predators on the forest floor, and they will eat many of the small species that live there, so this effect is unlikely to only influence toads. And there are also other ways in which invasion by this Asian plant may influence species on the forest floor. We documented changes in invertebrate densities and soil characteristics that may affect other species that depend on these invertebrates for prey or are sensitive to changes in soil properties such as moisture and pH,” says DeVore.

This study nicely demonstrates how the structural changes in an environment (caused by an invasive species) can affect the way many different species interact, and how this can cause the downfall of a native species.