It has been present in Ireland since before the last glacial maximum, making it one of Ireland’s few native mammal species.

By Alex Taylor on 4th April 2012 in World Conservation Issues 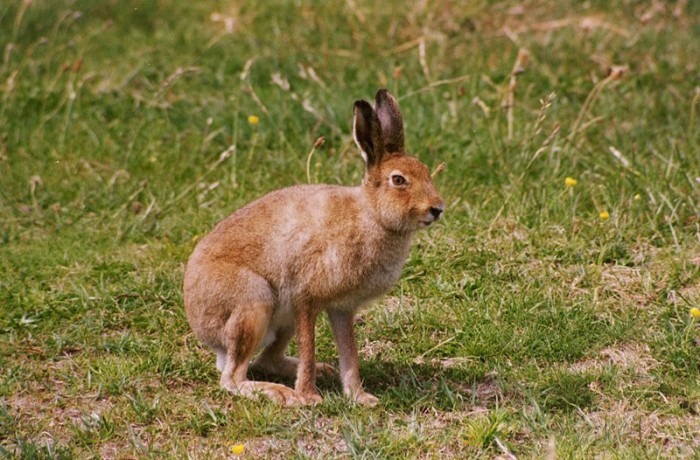 Image: By AlanWolfe (Own work) [CC-BY-3.0 (http://creativecommons.org/licenses/by/3.0)], via Wikimedia Commons

The European, or Brown hare is an extremely successful invasive species. Native to mainland Europe, it has now colonised countries including Canada and the USA, Australia and New Zealand, South America, and islands such as Barbados in the Caribbean and Reunion in the Indian Ocean. It was not found in Britain until pre-Roman times, when it was introduced as a food source, and introduced to Ireland in the mid to late 19th century, to be used for hare coursing.

The Irish hare, an endemic sub-species of the mountain hare, is a species with a unique evolutionary lineage. It has been present in Ireland since before the last glacial maximum, making it one of Ireland’s few native mammal species. Its isolation for between 30,000 and 60,000 years has made it vulnerable to the threats posed by the European hare.

One study has shown that the European hare exhibits strong competition for food and habitat space with other hare species. This appears to be the case with the Irish hare too. Both species occupy similar habitats so are likely to compete for food. The naivety of the Irish hare also means that diseases that the European hare is less susceptible to, such as European Brown Hare Syndrome (similar to hepatitis), may prove to be lethal to the native species. A similar situation exists with squirrels – the introduced grey squirrel is a carrier of the squirrel poxvirus, a lethal disease for the native reds.

There is also worrying evidence that the European and Irish hares are hybridising. Both have been seen sparring and boxing, typical hare mating behaviour, and molecular studies of roadkill carcasses found evidence of hybrids. This will lessen the genetic integrity of the Irish hare, a species found nowhere else. Climate change may also favour the Europeans. Ireland is set to become warmer and drier, causing increased cereal yields, making Ireland more suitable for arable horticulture. This is favoured by the European hare; Irish hare prefer pastoral agriculture. Being a glacial relict, the Irish hare may not be able to cope with warmer conditions, compared to the European hare of central European/Asian descent. Snow in winter and high elevations have limited the spread of the European hare in other parts of the world, but are not present in Ireland, so this will not preserve the Irish hare population.

In Sweden, mountain hares have completely disappeared from lowland areas in the south following the introduction and naturalisation of the European hare. The Irish hare is a protected species following sustained declines in numbers, and is unique as it is behaviourally and morphologically distinct from all other mountain hares. More research is soon to be carried out in Ireland to quantify the threat of the European hare and ensure the survival of this vulnerable native species.