All Ivory Markets Must Close

All domestic and international ivory markets should be closed, according to the study, and government stockpiles of ivory that are located all over the world must be destroyed, as they are a significant source of ivory appearing in the illegal trade. 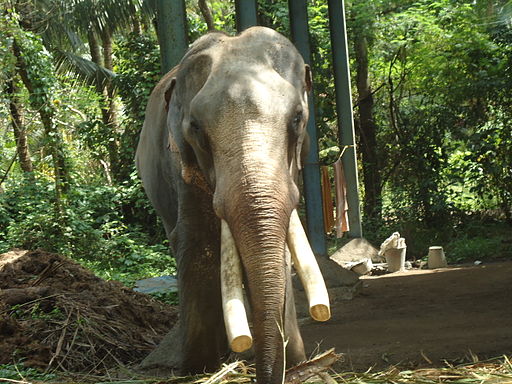 Image: By Ranjithsiji (Own work) [GFDL (http://www.gnu.org/copyleft/fdl.html) or CC-BY-SA-3.0 (http://creativecommons.org/licenses/by-sa/3.0)], via Wikimedia Commons

A new study was published this month, with a very clear message. To save elephants from extinction, all ivory markets must close, and all ivory stockpiles must be destroyed.

The study was published in Conservation Biology by the US-based conservation organisation the Wildlife Conservation Society. It states that corruption, organised crime, and the lack of enforcement make any legal trade in ivory a major contributing factor to the decline of African elephants. All domestic and international ivory markets should be closed, according to the study, and government stockpiles of ivory that are located all over the world must be destroyed, as they are a significant source of ivory appearing in the illegal trade.

The author of the study and the Wildlife Conservation Society’s Vice President for Species Conservation, Elizabeth Bennett, said: “If we are to conserve remaining wild populations of elephants, we must close all markets because, under current levels of corruption, they cannot be controlled in a way that does not provide opportunities for illegal ivory being laundered into legal markets.”

The study examined the corruption index of 177 assessed countries. This revealed that half of the 12 African countries in which elephants live are in the bottom 40%, meaning there are high levels of corruption. Six out of eight countries identified by the Convention on International Trade in Endangered Species of Wild Fauna and Flora (CITES) as the most implicated in the trafficking of ivory are in the bottom half of the most corrupt countries in the world.

Legal ivory markets are supposed to trade only in confiscated stockpiles and antiques, and some organisations believe that carefully regulated ivory sales would raise money for conservation and help protect elephants. The study, however, refutes this. It claims that financial incentives to break the law and obtain profits far outweigh incentives to obey the law because poachers and traffickers simply pay their way out of trouble. And once illegal ivory has entered the legal trade, it is impossible for enforcement officers to know what is legal and what isn’t.

The study also reports that, with good enforcement on the ground, poaching can be tackled. An example of this comes from forest elephants in Central Africa. Nearly two-thirds of all forest elephants have been killed for their tusks in the last decade, but now occur in densities seven times higher in sites with ecoguards than in sites with no protection. Nevertheless, the cost of this in monetary terms and in human lives will continue as long as ivory profits continue to escalate and provide incentives to illegally kill elephants and traffic their ivory.

The US Fish and Wildlife Service estimates that at least 30,000 elephants have died, at a rate that will see elephants becoming extinct in the next few decades. Elizabeth Bennett says: “In the long term, the only sustainable solution is for the demand for ivory – the ultimate driver of the system – to be reduced. Until that happens, if elephants are to survive, we need to close existing legal markets.”