K is for Kite

These birds represent Britain’s sole truly ‘native’ stock, and at the Gigrin Farm feeding centre provide one of the best wildlife spectacles in the country.

By Chris Foster on 11th June 2012 in A to Z of British Birds, Bird Conservation 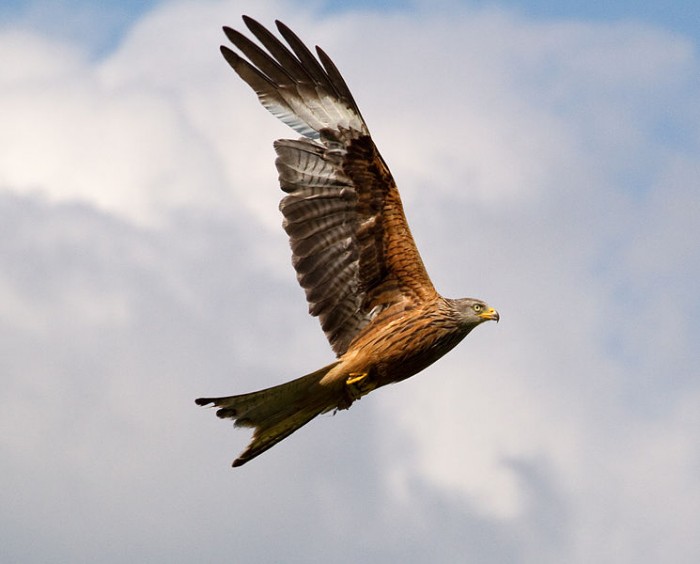 According to fossil records, red kites have been present in the British Isles for at least 125,000 years. During Shakespeare’s lifetime, just yesterday on that timescale, kites were common in cities including London, building rooftop nests lined with old rags and feeding on scraps and carrion from the city streets. One of kites’ 15 appearances in his plays hints at that dietary preference for carrion, when they are taken as an ill omen before battle in Julius Caesar:

“Ravens, crows, and kites,
Fly o’er our heads and downward look on us.”

So it would be hard to argue they don’t belong here, and hard too to argue that red kites are a voracious predator, likely to cause problems by taking vast quantities of live prey. But I wouldn’t be surprised if some tried to, given the history of raptor intolerance or even persecution in Britain. This often persists even when the evidence presented is weak – recent controversies over white-tailed eagles in Scotland (already reintroduced in the ‘70s) and East Anglia (reintroduction plans on hold), or what has swiftly become known as ‘Buzzardgate’ illustrate the point.

Fortunately the reintroduction of red kites in southern England has been hugely successful, whilst only moderately so in Scotland where illegal persecution remains a problem. As an anecdotal illustration, I often remark on how I don’t recall ever seeing kites when I moved to Reading for my BSc almost ten years ago. By the time I returned in 2010 kites were an everyday sight in the town’s skies, having spread from their release site in the nearby Chilterns. Large flocks gather in areas where they are fed from back gardens, or even, allegedly, to dine on Happy Meal scraps out the back of a town centre McDonalds.

Less trumpeted, but perhaps an even greater success numerically, has been the steady improvement of red kites’ fortunes in Wales. These birds represent Britain’s sole truly ‘native’ stock, and at the Gigrin Farm feeding centre provide one of the best wildlife spectacles in the country.

Whatever their origin, most of us now live within range of what is, to my mind, one of the world’s most beautiful birds of prey. Orange-red body, black and white wings, pale grey head, deeply forked tale – kites are simply stunning. They are the living embodiment of the flagship species concept: turning heads, changing minds and winning hearts nationwide. And since ours is the only increasing population in the world, Britain’s red kites now have global conservation significance: more than ever, they are worth cherishing.