A study of the physiology of birds in the Western Cape in South Africa suggests that birds’ population decline in response to warming temperatures is more complex, and more serious, than previously thought.

By Alex Taylor on 30th November 2015 in Bird Conservation 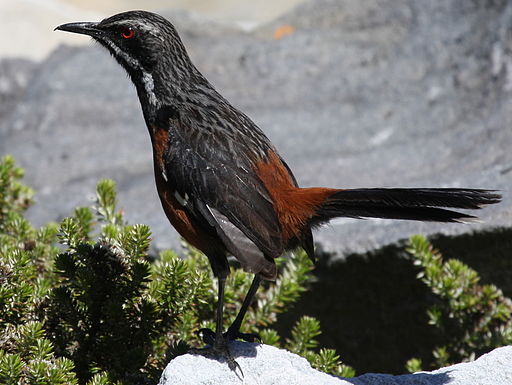 Birds are the best studied group of organisms on the planet, which makes them powerful sentinels for the entire natural world. They tell us how all animals are responding to human-induced climate change, and the news is not good. A study of the physiology of birds in the Western Cape in South Africa suggests that birds’ population decline in response to warming temperatures is more complex, and more serious, than previously thought.

Climate change is causing habitats to shift in response, and birds are being forced to move along with them, something that is not always possible. The new study, published in Conservation Physiology, compared data on 12 fynbos bird species from two Southern Africa Bird Atlas surveys conducted 15 years apart. This data was then matched to climate data for the same period, as well as physiological data for each bird. The scientists from South African universities say that a key aspect of the study was the comparison of the climate and population data with the heat response, known as the ‘thermal tolerance,’ of each bird. This allowed them to assess the extent of the birds’ ability to cope with changing temperatures.

To obtain the physiological data, the scientists subjected the birds to a range of temperature tests to determine their physiological response. They found that there was a “striking similarity” between bird declines and increases in average temperature, most notably in two species – the Cape Rockjumper and the Protea Seed-eater. Reporting rates of these species dropped by 31% and 32% respectively during the time period. The Cape Rockjumper’s decline was clearly linked to a low physiological tolerance of heat, and is therefore in desperate need of conservation intervention. The study says: “Conservation action appears to be urgently needed for the Cape Rockjumper and Protea Seed-eater if their declines are to be properly understood and halted. We need further research to determine the cause of decline of Protea Seed-eaters, and to assess how Cape Rockjumpers may best be assisted to cope in the face of continuing climate change.”

All twelve species fared badly, as they all showed range declines over the study period. Eight of them show declines in reporting rate or local extinction in more than half of their habitat range. The species declining most rapidly were those experiencing the greatest temperature rise within their range, however the birds that live in naturally warmer areas are generally faring better than those in cooler areas. But because endemic birds typically favour cooler habitats, it is these species that appear to be more vulnerable to climate change rather than non-endemic birds.

The authors of the study call for a greater understanding of how climate change affects bird species. This will enable the development of conservation strategies to increase survival rates. Lead researcher Susie Cunningham said: “We know climate change is linked to changes in species’ numbers and distributions, but we don’t always know exactly how or why. We need to figure out the factors actually driving declines before we can develop proper conservation measures to halt them. Fynbos birds are particularly important in this regard because they live in an area that has been extremely stable, climatologically speaking, for a very long time. So changes in climate are not something they are used to. Furthermore, six of the species we studied are endemic to the fynbos, so if we lose them from this biome, we lose them altogether.”