The koloa, the only endemic duck remaining on the main Hawaiian Islands, is threatened by inbreeding with feral mallards. But a new study has found that its genetic diversity is high and conservation efforts have been successful. 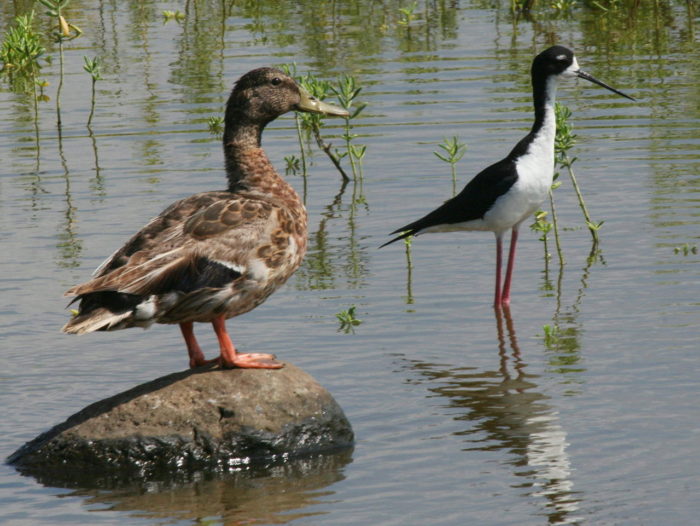 The endangered Hawaiian duck, or koloa, the only endemic duck remaining on the main Hawaiian Islands, is threatened with genetic extinction due to interbreeding with feral mallards. This has led to the creation of hybrid forms of the koloa. But new research has found that the genetic diversity of the koloa is high, and conservation efforts on the island of Kauai have been successful.

The study, a culmination of two decades of research and published in Molecular Ecology, offers hope for existing conservation efforts with the koloa and other endangered birds around the world.

Caitlin Wells, a research scientist at Colorado State University and lead author, said: “Persistence of an endangered native duck, feral mallards, and multiple hybrid swarms across the main Hawaiian Islands. The fact that the koloa on Kauai are pure and have a lot of genetic variation are two really positive things that came out of this study.”

Andy Engilis, study co-author from UC Davis Museum of Wildlife and Fish Biology, said the study is pivotal in the struggle to save koloa from extinction: “This study lays the foundation for a new chapter in the recovery of the koloa, a new trajectory towards recovery and delisting as an endangered species.”

The largest population of koloa is on Kauai, where the team found very few hybrid birds. On the other islands, however, all of the birds were hybrids or feral mallards.

Historically, koloa existed throughout the main Hawaiian islands, but they disappeared from all islands except Kauai and Niihau by the late 1960s due to habitat loss, introduced predators and unregulated hunting. Soon after, wildlife managers began captive breeding and release programs on Oahu, Hawaii and Maui to re-establish the koloa. Unfortunately, mallards were never removed on these islands, resulting in rapid hybridisation.

This research study was conducted, in part, to determine the genetic makeup of koloa on Kauai. The research team studied 425 koloa, mallards and hybrids from populations across the Hawaiian Islands, gathering more than 3,300 genetic data points from the birds. Members of the team collected blood samples from hundreds of the birds before releasing them back into the wild.

The researchers also gathered genetic data from the carcasses of koloa retrieved following botulism outbreaks, particularly in the Kauai population.

Previously, wildlife managers had thought that if they left the koloa hybrids alone, the birds would eventually return to pure koloa on their own. “That’s not what we found,” explained Wells. “If you don’t have pure koloa parents that outnumber the feral mallards, you’re not going to get any decreases in those hybrid proportions.”

The recovery of the endangered koloa is important because the bird is endemic to the Hawaiian Islands.

Engilis adds: “Its recovery could be viewed as a beacon of hope for the many dozens of critically endangered birds found in the islands.” Researchers also point out that its recovery is important because of its unique evolutionary history.

“Should the environment change, due to things like climate change, there’s a lot of potential for the koloa to evolve on its own, given the genetic diversity we’ve seen…we have enough individuals with enough genetic variation in the koloa, and we’ve also genetically identified the hybridising species. It seems very clear that we can separate those going forward.”