Are Magpies Responsible for Songbird Declines?

Like most corvids, the Magpie is a figurehead for human/wildlife conflict in modern day Britain. A bird cherished by many yet actively maligned by others.

By James Common on 7th July 2016 in Bird Conservation, Education 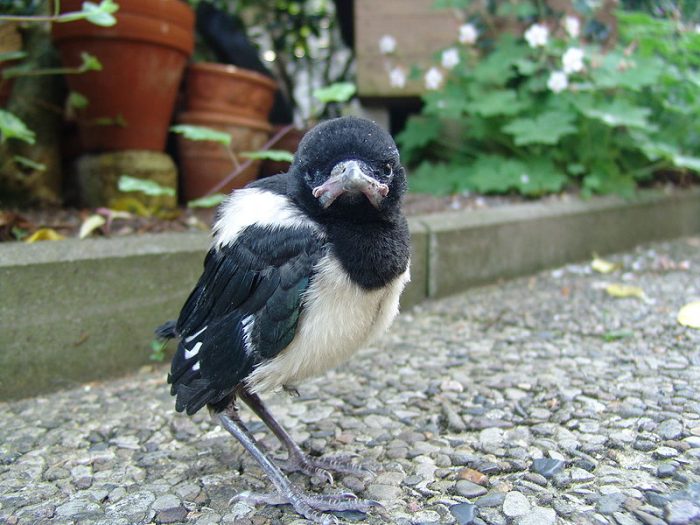 “One for sorrow,
Two for joy,
Three for a girl,
Four for a boy,
Five for silver,
Six for gold,
Seven for a secret,
Never to be told,
Eight for a wish,
Nine for a kiss
Ten for a bird
You must not miss”

The above nursery rhyme is one familiar to many; one drilled into us as children and recited with enthusiasm, even in adulthood. A familiar verse associated with the Magpie (Pica pica) – a bird which occupies a special place in the hearts of many nature lovers, myself included. A charismatic corvid of unrivaled intelligence, iridescent beauty and brazen charm and, thankfully, a firm fixture of daily life across most of Britain. Magpies – once scarce as a result of widespread persecution – now a welcome sight in our woodlands, hedgerows, fields and gardens.  Well, welcomed by many, but not all…

Like most corvids, the Magpie is a figurehead for human/wildlife conflict in modern day Britain. A bird cherished by many yet actively maligned by others. This apparent hatred stemming from the monochrome ones tendency to predate the eggs and chicks of other bird species, including those of economic importance such as pheasant and partridge. This has lead many control Magpies in order to protect game, something perfectly legal under the UK general license. Indeed, Larson traps designed to capture corvid species are a fairly common sight in our countryside, encountered everywhere from lowland pheasant shoots and farmland to upland estates.

While I may not particularly like the idea of removing magpies (and other corvids) to protect game, I accept that it is a part of life. One thing that does however interest me is the tendency of others to remove magpies when they themselves have little to lose through the Magpie’s predatory antics. Farmers, homeowners and other groups who exercise their legal right to cull Magpies seemingly without cause. People whom, when questioned, always produce the same answer: “but they kill all of the songbirds”.

A hatred of magpies and their kin appears to be deeply ingrained in the hearts of many, distaste rife among both rural and urban populations. Their fondness for fledglings and eggs, though entirely natural, distressing to some who feel such things justify taking action against the birds in response. Actions born sometimes of vengeance and on other occasions, genuine concern for songbird populations – some of which, at present, are in woeful decline. The sight of Magpies, combing a hedgerow or field in search of prey is a familiar one to me. Yet not one that fills me with anger, as it does others. Predation is part of life, after all, and the natural world is seldom rosy. No, it is the actions of those who act under this pretense that intrigue me most. Is the killing of magpies to “protect” songbirds justified? A scan of the available literature regarding the subject does provide some clues.

Many songbird populations have decreased over recent decades, at a time when Magpie numbers have increased tenfold (Marchant et al, 1990). A trend which, given the coincidence in timing, may appear to suggest that increased predation may be responsible (Thomson et al, 1998) although, since 1990, Magpie inceases have evened out and the population appears to have reached a natural equilibrium (RSPB, 2016).

To date, many studies have attempted to determine whether predators have a detrimental impact upon bird populations, though these have produced mixed results. With some (Newton, 1993; Witt, 1989; Bastian, 1989) suggesting that no negative relationship exists between predators and avian prey and others (Moller, 1988, Potts, 1986) suggesting that such a relationship does indeed exist. Many more are inconclusive and suggest predator/prey relations are complex and the impact of predation, unclear (Kie, White & Knowlton 1979; Parker 1984; Trautman, Fredrickson & Carter 1973).

With specific regard to the Magpie, many studies have attempted to define a relationship between songbird declines and predation (Gooch et al, 1991; Mizera, 1988; Thomson et al, 1998 etc). Once again, these findings have proven inconclusive, though there is good evidence to suggest that Magpies do not have a detrimental impact on songbird populations (Thomson et al, 1998; Gooch et al, 1991). Indeed, Thomson et al (1998) found no evidence that Magpies suppress songbird pop
ulations at a national scale and Gooch et al (1991) even noted an increase in the nest success of passerine species coinciding with an increase in Magpie numbers. The latter observing a decrease in the nest mortality of breeding Song Thrush, Yellowhammer and Greenfinch over the study period – possibly as a result of a decrease in predation from other corvid species – crows and jackdaws facing more competition as Magpie numbers increased. Additional studies (Witt, 1989, Bastian, 1989) similarly found no correlation between increasing Magpie populations and songbird declines.

It should be noted that the results of some studies do contrast with the results of Thomson et al (1998) and the other studies above. For example, Mizera (1988) suggests that Magpies could be to blame for the widespread breeding failure of open nesting songbirds in suburban areas of Poznan, Poland. While others (Andren 1992, Timsit and Clergeau 1998, Paradis et al. 2000, Stoate and Szczur 2001) have suggested that predation by corvids does indeed have a negative impact upon the breeding success of common passerines. Paradis et al (2000) for example highlights a positive correlation between corvid density and the nest failure rates of thrush species.

In relation to the aforementioned studies however, Gooch et al (1991) write that: “as such studies have only been run in farmland and were unable to reject the confounding effects of habitat type and time variation on nest-failure rate, the conclusions warrant caution” – thus highlighting the distinct need for further research. Thomson et al (1998), despite their conclusions, also accept that it may be possible for magpies to have a localised impact upon songbird numbers – specifically where non-related factors have already weakened populations.

It is widely acknowledged that predation can negatively effect gamebird populations (Newton, 1993; Taper et al, 1996) and clear, in some cases, that the removal of predators (including corvids) can aid in the recovery of certain species. A notable example coming from Tapper et al (1996) and their study of grey partridge. The evidence to suggest that the removal of magpies, and other corvids, benefits songbirds is however comparatively sparse. With Chiron et al (2007) concluding that the control of magpies on their study site was “ineffective” to preserve passerine populations. The authors later stating that the risk posed by magpies is no greater at high densities than at lower ones.

All in all, the Magpie argument is a fascinating one. It is clear to me that further studies must be undertaken to properly assess the situation, though personally, I am inclined to believe that predation is of little consequence for songbirds when compared to other, more pressing problems. Among these; agricultural intensification and habitat loss. Bypassing the obvious sentiment attached to the issue – I really do love Magpies – it should be remembered that the regular diet of a magpie comprises only 2% small birds as opposed to 80% invertebrates (Balanca, 1984). Magpies and their prey species have coexisted for an awfully long time without issue and from an evolutionary perspective, it would make no sense for any predator to greatly reduce prey populations. Magpie predation may well be a localised issue – i suspect it is – but only in areas where we have already put pressure on songbird numbers through our own actions. Would it not make sense to combat these issues first? At least before dragging the humble Magpie once more through the dirt. Only once these issues have been rectified should the term “control” come under consideration.

As I have said, I accept the control of corvids for economic interests but see no reason why such measures should be needlessly undertaken elsewhere. Scouring the journals available before writing these piece, my thoughts on the issue remain more firmly rooted on the ‘live and let live’ side of the fence.

For more from James you can follow him on Twitter at: @CommonByNature or check out his personal blog at: commonbynature.co.uk

Some interesting reading on the subject can be found below:

Thomson, D.L. et al., 1998. The widespread declines of songbirds in rural Britain do not correlate with the spread of their avian predators. Proceedings of the Royal Society B: Biological Sciences, 265(1410), pp.2057–2062.

Society, B.E. & Ecology, A., 2012. in predation reduction of an experimental The effect density success and population on the breeding pressure Perdix perdix of grey partridges. , 33(5), pp.965–978.