Lonesome George: Death of an Icon

For the last 40 years, this 5 foot-long, 200 lb tortoise lived on Santa Cruz Island at the Charles Darwin research centre in the Galapagos Islands, having been moved from Pinta when he was first discovered in 1972. 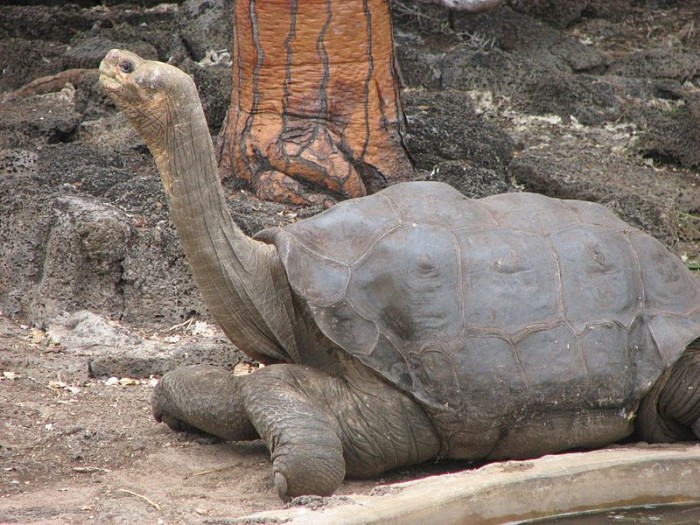 On Sunday 24th of June, staff at the Galapagos National Park announced the news that Lonesome George, a true conservation icon, had died from unknown causes. He was the last of the Pinta Island giant tortoise subspecies, hence his name, and described as the “rarest animal on earth.” He was thought to be 100 years old, making him a young adult as he could have lived to be 200 years old.

For the last 40 years, this 5 foot-long, 200 lb tortoise lived on Santa Cruz Island at the Charles Darwin research centre in the Galapagos Islands, having been moved from Pinta when he was first discovered in 1972. His relatives had been killed for oil or food by seal hunters and whalers in the 19th century, and his habitat was ruined by goats introduced from the mainland. Now that Lonesome George is dead, his subspecies is probably extinct, marking the end of a line stretching back ten million years.

With a natural tendency to avoid people, George was an evasive animal. Scientists famously tried to encourage him to mate and help repopulate Pinta, but most attempts, including artificial insemination, failed. Having lived with a female of a similar subspecies for 15 years however, he did eventually mate, but the eggs were infertile.

He became one of the world’s most famous animals, featuring on Ecuadorean bank notes and stamps, and attracting 180,000 tourists to the Galapagos Islands every year. George was a symbol of the rapid loss of biodiversity around the world, yet at the same time, an inspiration to conserve the biodiversity we have left. According to the Galapagos Conservancy, who run a giant tortoise breeding programme, the fame of this one tortoise enabled the recovery of small populations of many other tortoises. There are now around 20,000 giant tortoises of different subspecies inhabiting the islands. In fact, it was the differences between the appearance of tortoises from different islands in the archipelago that contributed to Charles Darwin’s formulation of the theory of evolution.

Some good news recently reported by scientists is that a first generation hybrid of Pinta Island tortoises and Isabela Island tortoises has been discovered. This means that at least 50% of George’s genetic material still exists. But the loss of this ambassador for conservation will be felt throughout the world.