A new report has concluded that Florida’s manatees are likely to persist for the next 100 years despite facing continued threats, providing that wildlife managers continue to protect these iconic mammals and their habitat. 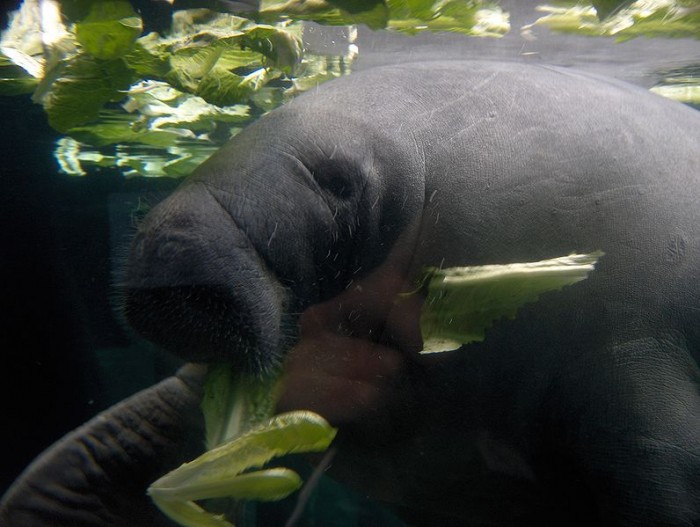 Florida’s iconic manatee population is likely to endure for the next 100 years, a new study has concluded. As long as wildlife managers continue to protect them and their habitat, their future looks bright.

The study was led by veteran manatee scientists from the US Geological Survey and the Florida Fish and Wildlife Research Institute. They estimated that there is a less than 0.5% chance that either Florida’s Atlantic or its Gulf of Mexico population could fall to as few as 500 adults. This is the level that could imperil the marine mammals’ long-term future.

“Today the Florida manatees’ numbers are high. Adult manatees’ longevity is good, and the state has available habitat to support a population that is continuing to grow,” said USGS research ecologist Michael C. Runge, lead author of the USGS report, “Status and Threats Analysis for the Florida Manatee (Trichechus manatus latirostris), 2016,”. Still, new threats could emerge, or existing threats could interact in unexpected ways. Managers need to remain vigilant to keep manatee populations viable over the long haul.”

The team found that the population is likely to gradually double over the next 50 years and then level off. Over time, environmental and habitat changes will probably cause manatees to become less abundant in South Florida – some power plants are expected to shut down so the manatees will lose warm water refuges created by their discharge canals. However, in the north of Florida, warm natural springs are capable of hosting more manatees so the population there will likely grow. Overall, the population will remain high.

Florida manatees were one of the first species to be listed as endangered when the Endangered Species Act went into effect in 1973. At that time, only around 1,000 individuals survived, but over the last 40 years boat speed regulations, habitat protection and other measures have helped the population rebound. The most recent count early this year found 6,620 manatees. In March it was announced that the manatees’ status was changed from endangered to threatened.

Since the 1970s, scientists have photographed more than 3,000 animals and identified them from propeller scars and other markings. From a database of over 750,000 photographs, satellite tracking, genetic information and other data, they now have a detailed understanding of how manatees interact with their environment. In the coming decades, they will continue to face two longstanding, serious threats – fatal collisions with watercraft, and the loss of warm-water habitats that provide them with refuge during the winter. As manatees lack an insulating layer of fat, water colder than about 70 degrees can kill them.

The new analysis also projects that mortality due to red tide algal blooms will become an equally serious threat, if they are more frequent and more intense in the coming decades.

Researchers tested many scenarios to see whether they could find a set of circumstances that would trigger a significant statewide decline in population. “If the rate of mortality from watercraft collisions were to double, the population’s resilience would be compromised,” said Runge. In that scenario, the risk that either the Atlantic or Gulf populations could fall to 500 animals was about four percent, he said. “We looked at all the other pressures people have mentioned, and we did not find any combination of threats that raised the risk of a decline to fewer than 500 animals on either coast above nine percent.”

“Manatee populations will continue to face threats. But if these threats continue to be managed effectively, manatees will be an integral and iconic part of Florida’s coastal ecosystems through the coming century.”