M is for: Mandarin Duck and Mistle Thrush

Chris Foster talks about the Mandarin Duck and Mistle Thrush as part of his A to Z of British Birds series.

By Chris Foster on 9th July 2012 in A to Z of British Birds, Bird Conservation 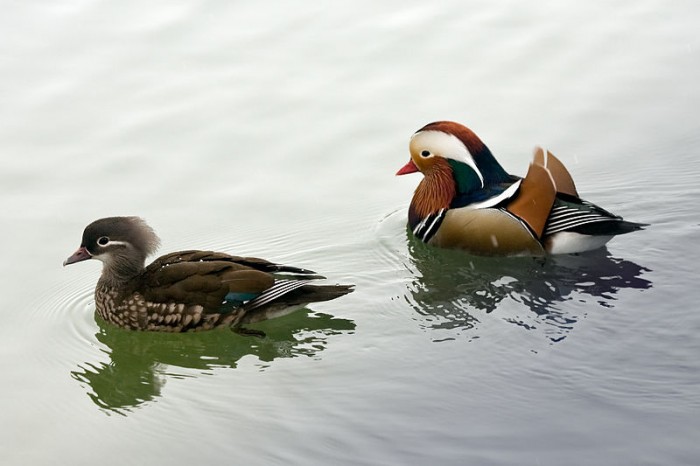 Introduced alien species get a bad press – and not without reason. The IUCN rank invasive species as the second biggest cause of extinctions worldwide. But in a very few cases, global conservation of a species may actually be aided by introductions. Take the mandarin, a striking oriental duck that has built up a sizable feral population in the UK after escaping from captive collections. The 7,000 that live here now represent a little less than ten per cent of an otherwise declining global population – potentially an important buffer against increasing habitat destruction in their Asian home range. Mandarins were once thought to have occurred in the UK fossil record, such that you might consider them an extremely belated re-introduction as opposed to a straight introduction; however, this is now contested, duck remains being notoriously difficult to assign to a particular species.

Many would consider it a pleasure to have them anyway, whatever their status. The male’s plumage is extravagant, to say the least: a riot of colour topped off by little orange sails on the back, lending the appearance of a richly decorated Chinese junk as they cruise across a woodland pond. But as a likely ‘alien’, is the pleasure of watching them a guilty one? So far, it seems not. To the best of my knowledge, mandarins have not been proven to out-compete any native hole-nesting birds, or cause any other ecological problems. So on a key clause of the IUCN definition of an invasive species – one which is “generating a negative impact on the local ecosystem and species” – mandarins are thus far not guilty. Unless that changes, I say we should continue to welcome what could be a globally significant population of an incredibly beautiful duck.

Recent gales and downpours in mind, it only seems appropriate to mention the mistle thrush.  Slightly larger and paler than a song thrush, with a black-spotted breast, mistle thrushes inhabit open woods and parkland quite widely across Britain. A bold, aggressive species, you’re most likely to notice them asserting their authority with a loud, harsh rattle.

Their song is a much more pleasant affair: a wild, far-carrying series of short phrases, often continuing for quite extended periods – sounding somewhere between a song thrush and a blackbird. They’re often the only bird singing in the face of approaching bad weather – a habit which earned it the colloquial name ‘storm-cock’. That might well make the mistle thrush the emblematic bird of summer 2012.