Two decades of surveys of marbled murrelets on the west coast of the United States shows that these elusive seabirds are impacted by changing ocean conditions and the loss of old forest. Conservation actions must, therefore, take into account factors that influence both marine food resources and terrestrial nesting habitat. 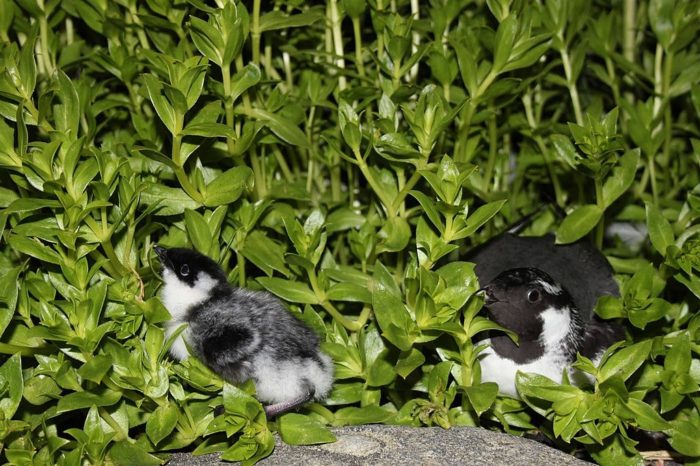 Squeezed by changing ocean conditions that limit their food options and the long-term loss of old forest needed for nesting, marbled murrelets would benefit most from conservation efforts that take both ocean and forest into account, new research by Oregon State University shows.

Published in Conservation Letters, the findings are based on two decades of murrelet surveys at nearly 20,000 sites in the Oregon Coast Range and illustrate how the elusive seabird is at risk of its habitat gradually shrinking to the point of local extinctions or worse.

Lead author Matt Betts said: “It turns out that the same ocean conditions that influence salmon returns, including the forage fish murrelets need to successfully nest, had a huge influence on the likelihood that murrelets will come inland to breed. Given that these prey items tend to be in lower abundance when ocean temperatures are high, changing climate conditions could reduce prey availability as well as the tendency for murrelets to nest in the future.”

Marbled murrelets are closely related to puffins and murres, but unlike those birds, murrelets raise their young as much as 60 miles inland in mature forests. Disturbance in either the ocean or forest environment has the potential to impact murrelet populations.

“There aren’t many species like it. There’s no other bird that feeds in the ocean and commutes such long distances inland to nest sites. That’s really unusual,” said study co-author Jim Rivers.

The dove-sized bird spends most of its time in coastal waters eating krill, other invertebrates and forage fish such as herring, anchovies, smelt and capelin. Murrelets can only produce one offspring per year, if the nest is successful, and their young require forage fish for proper growth and development.

Along the West Coast, marbled murrelets are found regularly from Santa Cruz, California, north to the Aleutian Islands. Their populations have been declining by about 4% a year in Washington, Oregon and California, and the species is listed as threatened under the U.S. Endangered Species Act in those states.

“Early on in our work, we noticed strong fluctuations in the numbers of marbled murrelets coming inland to nest, so this study was about trying to get to the bottom of those highs and lows,” Betts said. “We found the first evidence that ocean conditions combined with old-forest nesting habitat influence the murrelets’ long-term occupancy dynamics. In particular, we learned ocean conditions are a key driver of those dynamics.”

The finding has potential key implications for forest policy in Oregon, where any state-owned site that goes two consecutive years without murrelet detection is classified as unoccupied and thus available for timber harvest.

Rivers says: “Our data show that below-average ocean conditions might last for more than two successive years. That means there could be a scenario where sites on state lands that are suitable for breeding go unused for more than two years which, under current guidelines, would let them be considered available for harvest. Thus, murrelets might be missing from inland sites not because the forest is unsuitable for nesting, but because they have inadequate forage fish during the summer breeding season. That means it is critical that we consider factors that influence both marine food resources and terrestrial nesting habitat when considering how to recover murrelet populations.”