Researchers in California have discovered an interplay between 3 species – due to invasive mice on the Farallon Islands are causing migrating burrowing owls to remain on the islands to eat them. But when the mice population crashes, they switch to preying upon the endangered ashy storm-petrel. 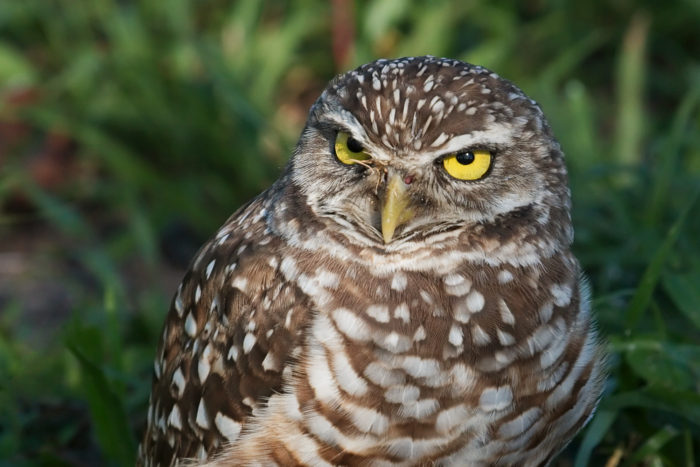 New research shows the significant negative impact that invasive, non-native house mice on the Farallon Islands are having to the threatened ashy storm-petrel. Original modelling by ecologists published in the journal Ecosphere shows the potential impacts to the petrel’s population if mice are allowed to remain. The super-abundant mice encourage migrating burrowing owls to stay on the island, who later in the winter switch from eating mice to preying on the petrels.

The paper’s authors, researchers from Point Blue Conservation Science, a non-profit wildlife conservation and research organisation based in California, conclude that the owls are inhibiting population recovery for the ashy storm-petrel. Models show that if mice are removed from the island, reducing the presence of overwintering burrowing owls, the population of threatened petrels is projected to stabilise or potentially increase. Their conclusions came after research involving mouse trapping and field surveys of both owls and depredated storm petrel carcasses was conducted between 2000 and 2012.

The ashy storm-petrel is a small, greyish-brown nocturnal seabird, that breeds in colonies on islands off the coast of California and northwest Mexico. It feeds on the rich California current by day and by night nests in rock burrows. Some experts estimate that there are only about 5,000-10,000 breeding ashy storm-petrels, with nearly half of the world’s population breeding on the South Farallon Islands, near San Francisco. The species is listed as endangered by the International Union for Conservation of Nature (IUCN) and a Species of Conservation Concern by federal and state agencies due to its small population and the numerous threats it faces. A major threat is climate change – temperature changes in California’s coastal waters could result in warmer and less productive waters, thereby reducing the food available to the birds. Ocean acidification may also result in the decline of crustacean prey because excess carbon dioxide will affect these animals’ shells. Additionally, sea-level rise will impact nesting sites that are situated too close to the water. Seabirds in general produce few young per year, and start breeding at an older age, so have low growth rates and therefore limited capacity to recover from reduced population sizes.

Burrowing owls are year-round residents in most of their range. However, the owls that breed in the northern USA and Canada usually migrate south to the southern USA and Mexico during winter months, and in all three countries are protected under the Migratory Bird Treaty Act. During their migration, these birds regularly stop at the islands to rest and therefore find a plentiful food source when invasive mice are at their seasonal population peak. Instead of continuing on their migration, several owls remain on the islands to feed on the mice. This keeps them on the island long past the natural time for them to move on to their wintering grounds. But the mouse population crashes each winter, forcing the owls to seek other prey. The owls then switch to preying on the rare ashy storm-petrels, which are just returning to begin their breeding cycle.

Dr. Nadv Nur, the study’s lead author, said: “Point Blue has been monitoring birds and other wildlife on the Farallones for over 45 years. While in recent years we suspected that the burrowing owls were having a significant impact on the petrel population, this is the first time we’ve been able to demonstrate how serious those impacts are and how much the possibility of the petrel population’s recovery will be threatened if the situation is left unchecked.”

Even a small number of owls can kill a large number of storm petrels if the owls overwinter on the island. Because the owls prey on breeding ashy storm-petrels, they also eliminate all current and future offspring of every bird they kill. The result is increasing mortality of the seabird, reducing the ability of the population to grow. Scientists estimate that over 40% of current annual mortality of the Farallon storm petrel is due to predation by owls. Removing house mice from the South Farallon Islands would break this chain of events. With no mice to feed on, migrating owls would find the islands inhospitable and most would continue on their southward migration instead of feeding on rare Farallon birds.

Researchers used Point Blue’s long-term data on the Farallon Islands National Wildlife Refuge to provide a quantitative estimate of the long-term anticipated benefit to ashy storm-petrels from a proposed house mouse eradication project. Importantly, they found that reducing the presence of overwintering burrowing owls by 80% (a reduction likely to occur if the mice are removed) is projected to lead to a stable or increasing petrel population.

After a period of increasing numbers, researchers observed the petrel population start going down in 2005-06, right as they started seeing more burrowing owls overwintering on the islands.

“What makes this a particularly compelling study is that researchers were able to determine that annual survival rates of locally breeding, uniquely banded, Farallon storm petrels decreased with increasing numbers of overwintering burrowing owls,” Dr. Nur says. “Field biologists also found that the number of carcasses of storm petrels depredated by owls increased as the number of over-wintering burrowing owls increased.”

If recently observed conditions apply in the future, the already-threatened storm-petrel population is expected to decline by 63% over the next 20 years.

Reducing burrowing owl abundance, through elimination of their house mouse prey, will have a substantial and significant effect in reducing overall storm-petrel mortality and will promote stable or increasing population trends. Reducing risks to the ashy storm-petrel population is expected to help keep the rare, threatened bird off the federal Endangered Species list.