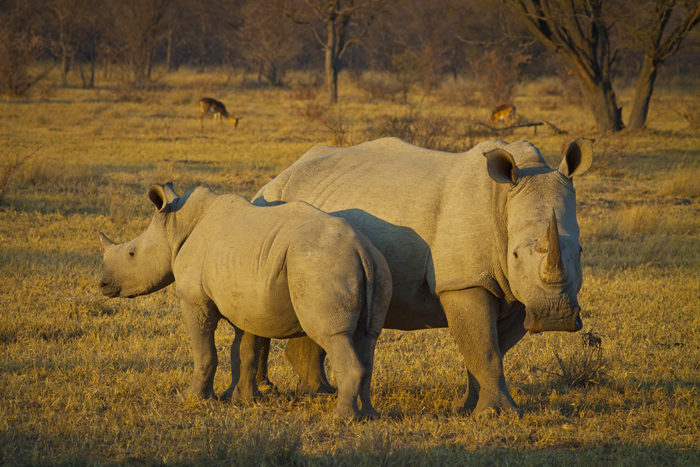 New genetic analysis of white rhino populations suggests it could be possible to rescue the critically endangered northern white rhinoceros from extinction, using the genes of its less threatened southern cousin.

The findings were published in Proceedings of the Royal Society B: Biological Sciences.

Analysing genetic samples from 232 rhinos, researchers from Cardiff University and the University of Venda in South Africa found that despite the northern and southern populations of white rhinos splitting from each other one million years ago they have occasionally shared genes during cold and arid periods, when African grasslands expanded, as recent as 14,000 years ago.

Dr Isa-Rita Russo from Cardiff University, said: “By looking at the white rhino’s population history we’ve been able to establish that there was contact between northern and southern rhino populations throughout history. This is an exciting find! Genetic proof of contact between the populations suggests it may be possible to successfully rescue the northern white rhinoceros using southern white rhinoceros genes to create embryos, although further data would need to be collected to confirm this.”

Rhinos were once found throughout Eurasia and Africa, but today, three of the five rhino species are critically endangered and face a high chance of extinction. In recent years rhino numbers have dropped dramatically due to poaching for their horn which is prized in Asian countries. They also face threats from habitat loss and political conflict. White rhinoceros are the second largest land animal. Their distribution across Africa is divided into populations in the north and south. The southern population declined to its lowest number around the turn of the nineteenth century, but recovered to become the world’s most numerous rhinoceros. In contrast, the northern population was common during much of the twentieth century, declining rapidly since the 1970s, leaving only two remaining post-reproductive rhinos.

Professor Yoshan Moodley, the lead author of the study from the University of Venda, said: “It appears that the white rhinoceros is no stranger to low genetic diversity, as our results show that the species was subjected to several climatically and anthropogenically driven population declines, which would have reduced and compressed genetic diversity in the past. This is one of the few large animals to survive the last ice age, and it seems that the additional human pressure on an already genetically compromised species has pushed the white rhinoceros further along the road to extinction.”