Petition launched as farmers call for increased control of ravens

This week saw the launch of a new petition, one aiming to have the Common Raven (Corvus corax) added to the general license – a move that would allow landowners to control (by lethal means) ravens in the same manner as other corvid species.

By James Common on 11th April 2016 in Bird Conservation, Environment 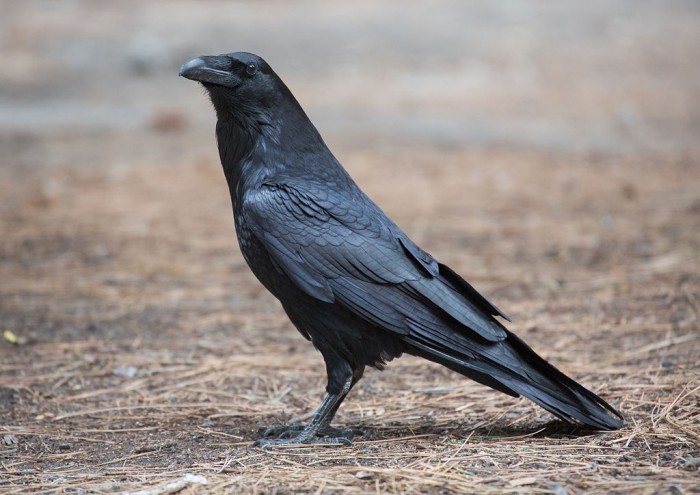 This week saw the launch of a new petition, one aiming to have the Common Raven (Corvus corax) added to the general license – a move that would allow landowners to control (by lethal means) ravens in the same manner as species such as Carrion Crow, Magpie and Jay. This is a move that will surely anger many conservationists, resulting in the deaths of a great deal of these currently protected corvids. It is however a move many farmers feel is necessary to protect livestock and thus, their income. It certainly is an interesting topic and one that, for the purpose of this post, I have tried to view without sentiment – a difficult task for someone, like me, who boasts a soft spot for these birds. Before giving my opinion on the matter, a summary of the argument (from both sides) is surely in order..

Ravens, by far our most imposing corvid are known to pose a direct threat to livestock, particularly in upland areas (SNH, 2016). This is particularly true when it comes to sheep farming – something made apparent by the graphic and, ultimately rather horrible images that surfaced recently of newborn lambs subject to depredation. A few of these images are shown alongside the petition which can be easily found online.

Farmers claim that due to the ravens protected status and subsequent population increases, that attacks of livestock are becoming more common – a logical assumption and one that is likely true. Attacks by ravens on sheep are not pleasant, the birds targeting various bodily orifices and often, not killing their prey outright. Something that no doubt results in a great deal of anguish for farmers forced to euthanize their stock upon discovery. This has lead many to criticize the protected status of the birds. Among these, Danny Bisset, the voice behind the current petition and Bert Burnett of the Scottish Gamekeepers Association whom stresses not just the threat posed to livestock by increasing raven numbers, but also to wildlife, most notably breeding wading birds.

One cannot dispute that ravens are having an impact upon livestocks and the situation is openly acknowledged by Scottish Natural Heritage (SNH) whom to date have issued licenses for the selective killing of ravens in areas where they pose a problem to rural interests. These licenses have been lambasted by farmers however who feel that killing “a few” birds is not sufficient to protect their stock, a recent example being used to bolster support for the petition. Here a flock of 30 ravens contributed to the deaths of a number sheep (both lambs and ewes) and as such a license to control the birds was applied for. SNH however granted permission for only two ravens to be removed – a move that many feel falls short of the mark when it comes to protecting “at risk” livestock.

SNH have responded to the current petition, promising to take the situation into consideration during their upcoming review of general licenses, their initial response shown below:

“we are aware of this petition and of the interest in adding Ravens to the birds which may be killed under the General licence. The list of species’ which can be controlled in this way is something which we keep under regular review. We are due to hold a consultation on General Licences later this year and following the outcome of that process, we will consider what changes, if any, are required for the general licences.”

The idea of adding ravens to the general license has however unsettled some and a number of groups have voiced their opposition to the notion, among these the RSPB.

The RSPB, while acknowledging the “distressing situation” has openly opposed the move to add ravens to the general license. Their initial response to the aforementioned petition going as follows:

“It’s completely understandable why this would be a distressing situation, however SNH does regularly issue licences to farmers to kill Ravens for livestock protection. We think it is therefor completely unnecessary to put Raven on the General Licence, which would result in poorly regulated, unrestricted killing of Ravens. It should be remembered that the Ravens in the East of Scotland are only now recovering from historical eradication and would be once again vulnerable to local extinction if SNH allowed a free-for-all on these birds. Hope that helps to answer your question.“

As ever, by opposing the notion, RSPB have prompted a backlash from those in favour of control measures – some fearful that the organisation could influence the decision on behalf of SNH. It should however be noted that many conservationist share the RSPB’s stance pointing out that moving ewes indoors to lamb would solve the problem without the need for lethal control. Highlighting that by lambing indoors and thus removing a potential food source for ravens that localised high densities would even out – ravens dispersing (or dying) due to a lack of food in the area. The latter statement has however been disputed by those in favour of increased control – stating that moving entire flocks indoors during lambing season is both unrealistic and detrimental to the welfare of the sheep themselves. Large numbers of sheep in close quarters allowing disease to spread and, ultimately, cause the deaths of more animals.

Ravens in the UK

At present, ravens are strictly protected under UK law, the entire British population estimated at 7,400 pairs (RSPB, 2016) and 12,000 pairs (SNH, 2016) – a dramatic increase from decades past where the population crashed due to unchecked persecution. Though this number may appear healthy, it represents only a fraction of the population that the UK “could hold” and indeed, ravens remain scarce in some areas. As the RSPB point out, ravens are still recovering and consolidating their range in certain areas, including the East of Scotland where many issues have occurred. Those in favour of culls have however stated that these estimates are inaccurate and that far more ravens persist in the UK at present. Though the species is gradually colonizing lowland areas, the majority of the raven population remains centered on upland areas – something that may lead to assumptions that the species is “abundant” though, given the turbulent history of C.corax it is far more likely that such numbers represent a natural equilibrium – in essence, what raven populations should be like absent the persecution that took place in decades past.

Until figures are produced with a certain degree of accuracy verifying claims that the Raven population is far higher than estimated I cannot support the addition of C.corax to the general license. This is not born of sentiment, or indeed out of opposition for culls or farmers taking action to protect their stock – I have no problem with the current workings of the general license. No, I cannot condone the widespread killing of ravens due to their conservation status. They are, after all, still recovering from the last time humans pushed them towards the brink. In my opinion, allowing the unregulated killing of ravens would render the recent gains of this species obsolete – effectively setting the population back a century or so.

Despite opposing this move however I should stress that I in no way oppose the notion that farmers should be able to protect their stock (and thus their livelihoods). I have stated time and time again the need to be pragmatic when it comes to both protected species and conservation and do feel their is leeway for SNH to possibly build on existing licensing. Obviously all control measures must be highly regulated – the number of birds removed recorded and analysed so not to impact upon the over all population but yes, if SNH were to allow the killing of more ravens in exceptional, problem circumstances, I would not protest. The needs of people must after all be met and while ravens are admittedly rather charismatic and thus inspire a great deal of devotion from nature lovers, it may be possible to strike a balance between the needs of both man and beast. Allowing farmers to protect their interests without declaring “open season” on the species.

I do agree that other measures could be deployed to protect sheep from raven depredation – moving stock indoors during lambing is certainly an option in some locations. I am however not naive enough to believe this is an option in all localities and thus accept that some ravens will need to be killed. Something that animal welfare groups and “compassionate” conservationists will no doubt dispute. Protecting each and every individual of a species, at all costs, is a noble notion but one I do not feel is very realistic.  If raven populations remain stable – a likely prospect under the current system, even with an increase in licensing, I stand content. Of course, it would be nice to see other measures given an increased focus prior to the implementation of lethal control – something SNH must surely aid with.