Platypus on Brink of Extinction

Australia’s devastating drought is having a critical impact on the iconic platypus. With increasing reports of rivers drying up and platypuses becoming stranded, it is feared that local populations are declining rapidly. 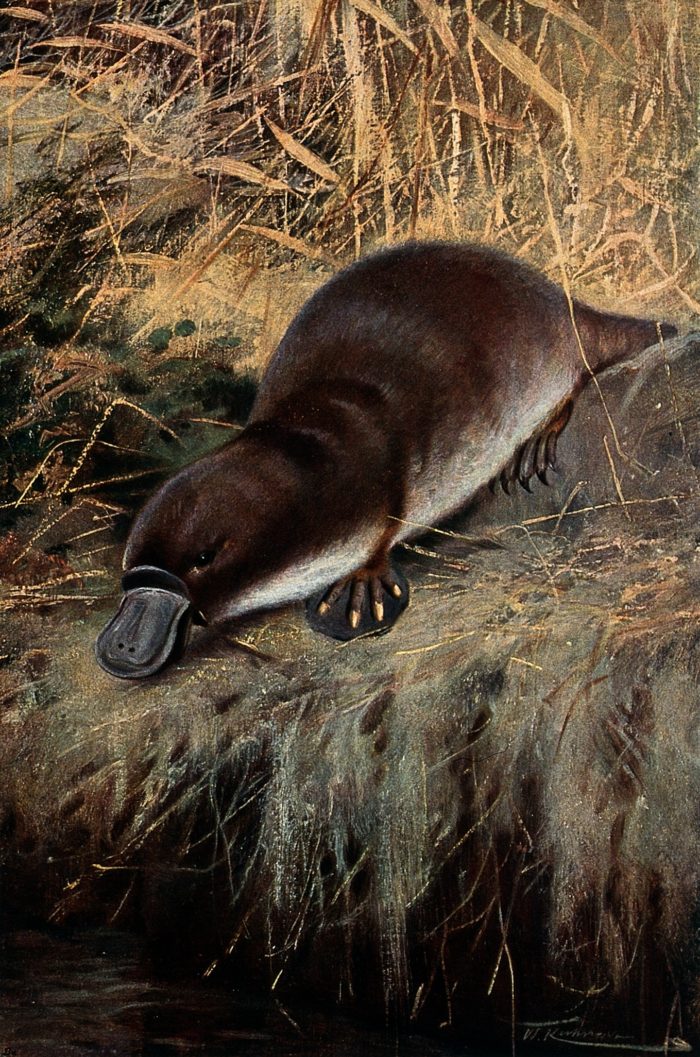 The duck-billed platypus is one of nature’s most unlikely animals. So unlikely that the first scientists to examine a specimen thought it was a hoax. It can probably be best described as a mixture of several other animals – a duck, with its bill and webbed feet, an otter’s fur and body and a beaver’s tail. They are also, somewhat surprisingly, a venomous animal – males have sharp stingers on the heels of their rear feet and can use them to deliver a strong toxic blow to anything that comes too close.

As their strange bodies indicate, they are at home in the water where they hunt for food using their sensitive bill that detects the electric fields generated by the muscular contractions of its prey. They scoop up insects and larvae, shellfish, and worms in their bill along with bits of gravel and mud from the bottom. All this material is stored in cheek pouches and, at the surface, mashed for consumption. Platypuses do not have teeth, so the bits of gravel help them “chew” their meal.

As well as the adaptations listed above, they have folds of skin that cover their ears and eyes when underwater and their nostrils can close to form a watertight seal. On land, however, they are a bit more awkward, although the webbing on their feet retract to reveal nails that allow it to run and dig burrows – in which, the females lay eggs, only one of two  mammals to do so (the other being the echidna).

Platypuses were once considered widespread across the eastern Australian mainland and Tasmania, although not a lot is known about their distribution or abundance because of the species’ secretive and nocturnal nature. Local changes and fragmentation of distribution due to human modification of its habitat have however been documented. Until the early 20th century, humans hunted the platypus for its fur, however it is now protected throughout its range and has been since 1905. This does not mean that it is free from threats, and sadly a new study has for the first time examined the risks of extinction for this animal and found that Australia’s drought is having a huge impact, with rivers drying up and platypuses being stranded.

The study was led by the University of New South Wales (UNSW) Sydney’s Centre for Ecosystem Science, funded through a UNSW-led Australian Research Council project and supported by the Taronga Conservation Society. Published in the international scientific journal Biological Conservation this month, the study examined the potentially devastating combination of threats to platypus populations, including water resource development, land clearing, climate change and increasingly severe periods of drought.

Lead author Dr Gilad Bino, a researcher at the UNSW Centre for Ecosystem Science, said action must be taken now to prevent the platypus from disappearing from our waterways.

He says: ”There is an urgent need for a national risk assessment for the platypus to assess its conservation status, evaluate risks and impacts, and prioritise management in order to minimise any risk of extinction.”

Alarmingly, the study estimated that under current climate conditions and due to land clearing and fragmentation by dams, platypus numbers almost halved, leading to the extinction of local populations across about 40 per cent of the species’ range, reflecting ongoing declines since European colonisation.

Under predicted climate change, the losses forecast were far greater because of increases in extreme drought frequencies and duration, such as the current dry spell. Dr Bino added: “These dangers further expose the platypus to even worse local extinctions with no capacity to repopulate areas.”

Documented declines and local extinctions of the platypus show a species facing considerable risks, while the International Union for Conservation of Nature (IUCN) recently downgraded the platypus’ conservation status to “Near Threatened.” But the platypus remains unlisted in most jurisdictions in Australia – except South Australia, where it is endangered.

Director of the UNSW Centre for Ecosystem Science and study co-author Professor Richard Kingsford said it was unfortunate that platypuses lived in areas undergoing extensive human development that threatened their lives and long-term viability.

“These include dams that stop their movements, agriculture which can destroy their burrows, fishing gear and yabby traps which can drown them and invasive foxes which can kill them,” Prof Kingsford said.

Study co-author Professor Brendan Wintle at The University of Melbourne said it was important that preventative measures were taken now: “Even for a presumed ‘safe’ species such as the platypus, mitigating or even stopping threats, such as new dams, is likely to be more effective than waiting for the risk of extinction to increase and possible failure. We should learn from the peril facing the koala to understand what happens when we ignore the warning signs.”

Dr Bino said the researchers’ paper added to the increasing body of evidence which showed that the platypus, like many other native Australian species, was on the path to extinction. “There is an urgent need to implement national conservation efforts for this unique mammal and other species by increasing monitoring, tracking trends, mitigating threats, and protecting and improving management of freshwater habitats,” he said.

The platypus research team is continuing to research the ecology and conservation of this enigmatic animal, collaborating with the Taronga Conservation Society, to ensure its future by providing information for effective policy and management.