Since 2005, the population of Giant Petrels has halved from over 5,800 nesting birds to around 2,600 in the South Orkney Islands. 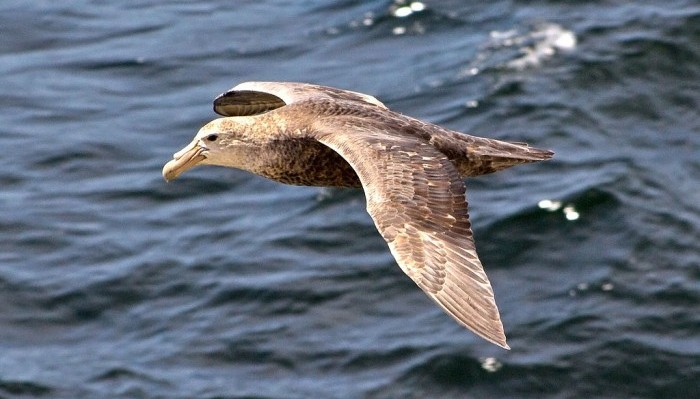 The southern giant petrel is an impressive bird. As its name suggest, it is a big seabird, with a wingspan of over 2m and long, pointed wings making it capable of long distance travel. It nests in large colonies on grassy or bare ground but does not breed until it is between 6 and 10 years old. It produces only one chick at most per year and returns to the same nesting site to breed. Southern giant petrels feed on a wide variety of prey, but is one species that displays a dietary difference between the sexes. The females feed at sea, eating crustaceans (such as Antarctic krill), squid and fish, whereas the males tend to remain on land, feeding on penguin and seal carcasses.

This charismatic seabird has attracted much interest from scientists, and has been the focus of study spanning 50 years. Recent results however, have not generated much good news. Published in the journal Polar Biology by scientists at the British Antarctic Survey, the data shows that the bird’s population on the Antarctic island of Signy has halved, and its breeding success has declined, in the last 10 to 20 years.

The giant petrels on Signy Island, in the South Orkney Islands, have been studied since 1968. Twenty years ago, a structured monitoring programme was introduced to keep track of the number of breeding birds and to count how many chicks fledged each season. This produced the most detailed surveys of the species in the entire South Orkney Islands. They revealed that breeding success in selected study colonies has declined dramatically, from 60% in 1996 to 40% in 2015. Whole island counts found that between the mid-1980s and the mid-2000s there was an increase in breeding success. But since 2005, the population has halved from over 5,800 nesting birds to around 2,600.

Lead author Mike Dunn from the British Antarctic Survey said: “In the fifty year study we found that although the population fluctuated periodically over this time, in the last 10 years, both numbers and breeding success have declined. Since the South Orkney Islands, of which Signy is part, represent nearly 10% of the global population of this species, continuation of such a decline both at Signy and elsewhere in this island group would be of conservation concern.”

Southern giant petrels have displayed considerable variations in both breeding pair numbers and breeding success on other islands in the Southern Ocean, suggesting that this species will defer breeding in years when environmental conditions are unfavourable.

British Antarctic Survey seabird ecologist and co-author Dr Richard Phillips says: “The results are surprising because this species seemed to be doing well on Signy. We really don’t know what’s causing this decline. It could be a reduction in sea ice or other factors affecting food availability and we don’t know if it’s affecting the species regionally or more widely. This study illustrates how the conservation situation of a species can change in only a few years. Formerly considered to be in the IUCN Red List category of Vulnerable, the southern giant petrel was re-categorised as ‘Least Concern’ in the late 2000s because positive trends at some sites counteracted negative trends elsewhere. However, if breeding numbers and success at Signy do not improve, and populations elsewhere in the Antarctic have continued to decline, then the IUCN status of this species will need to be re-assessed.”

Future research must address which climatic or environmental factors are driving the decline, nonetheless, this study highlights the importance of long-term monitoring not just for species faring badly, but also for those thought to be doing well.