The Amazon river dolphin, also known as the pink dolphin, is the largest of the river dolphins. For over a decade their carcasses have been appearing on riverbanks recently in record numbers.

By Alex Taylor on 2nd November 2011 in World Conservation Issues 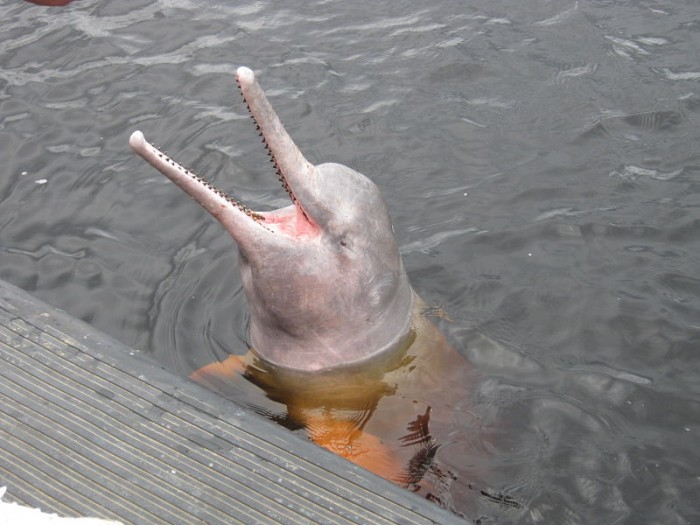 A recent blog post about the annual Taiji dolphin slaughter described the killing of thousands of dolphins in Japan, a high profile massacre reported widely in the media. Sadly, many other dolphin species are also suffering huge declines in numbers, yet drawing much less global attention. The Amazon river dolphin, also known as the pink dolphin, is the largest of the river dolphins. For over a decade their carcasses have been appearing on riverbanks recently in record numbers.

The gentle and curious nature of the Amazon River dolphins means that they swim close to fishing boats, making them an easy target for harpoons and nets. The dolphins are being killed by fishermen because the fatty flesh of the dolphins is effective bait for catching a particular type of catfish called piracatinga. Consumption of this catfish in neighbouring Colombia is driving the slaughter of dolphins in Brazil. In 2007, 884 tons of piracatinga came from Brazil, but by 2009, this number had increased to 2,153 tons.

In the Mamiraua Reserve in western Amazon, researchers have been studying the impact on the river dolphin population for 17 years. Lately the population has been dropping by 7%, approximately 3,000 animals, each year. They fear that the population will collapse if the fishermen are not stopped.  Yet killing dolphins is free, and the money that can be made from catching piracatinga is attracting more and more poor fishermen to the region.

While the Brazilian government does acknowledge that there is a problem (and it is illegal to kill the dolphins) little is being done to stop it. Fewer than five agents are responsible for protecting the wildlife in a vast jungle region covering the western two-thirds of Amazonas state, more than twice the size of Texas. It is also a matter of priorities, and at present the government is focusing on deforestation.