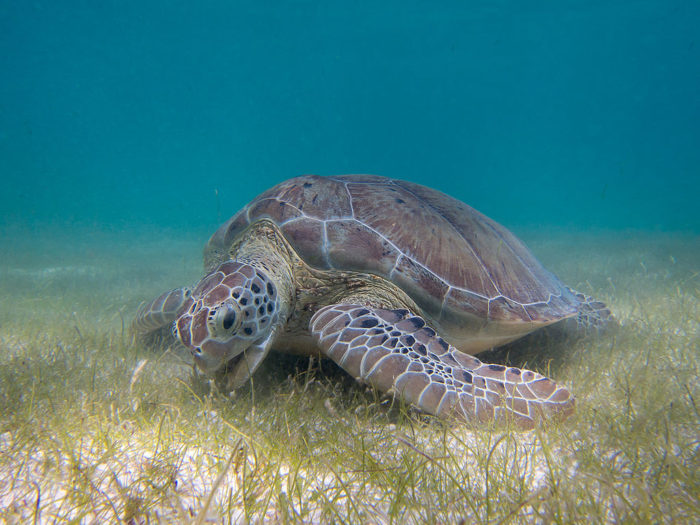 Known as “the lost years,” it is a little-understood journey that unfolds over thousands of miles and as much as two decades or more. Now, a Stanford-led study illuminates secrets of the North Pacific loggerhead turtles’ epic migration between their birthplace on the beaches of Japan and re-emergence years later in foraging grounds off the coast of Baja California.

The study, published in Frontiers in Marine Science, provides evidence for intermittent passages of warm water that allow sea turtles to cross otherwise inhospitably cold ocean barriers. The findings could help inform the design of conservation measures to protect sea turtles and other migratory sea creatures amid climatic changes that are altering their movements.

Lead author Dana Briscoe, who was a research associate at the Stanford Woods Institute for the Environment during the research and now works at the Cawthron Institute, New Zealand’s largest independent marine science organisation, says: “For decades, our ability to connect the migratory dots for this endangered species has remained elusive. This work builds on the backbone of exceptional research about these ‘lost years,’ and for the first time ever we are excited to provide evidence of a ‘thermal corridor’ to explain a longstanding mystery of one of the ocean’s greatest migrants.”

Sea turtles face many threats including strikes from ship traffic and fishing net entanglement. The International Union for Conservation of Nature lists six of the seven sea turtle species as critically endangered, endangered or vulnerable.

Despite scientific advancements in core habitat use, we still know precious little about the movement of turtles and other long-lived sea creatures between disparate locations. This knowledge gap makes it impossible to effectively assess and protect these species.

The researchers wanted to know how and why some loggerheads travel to the western coastline of North America while others remain in the central Pacific Ocean. How is it that some sea turtles, creatures highly sensitive to temperature, can cross a frigid zone called the Eastern Pacific Barrier between the two ocean regions that normally stops most creatures in their tracks?

To unlock that mystery, the researchers created the largest dataset on satellite-tagged loggerhead sea turtles ever compiled, employed sophisticated remote sensing oceanographic techniques and collected one of the first detailed records of sea turtle aging and stable isotope testing – a bone analysis that can be used to provide information about an animal’s life. The work relied upon decades of research by the international team of scientists.

They started by looking at a 15-year study tracking the movements of more than 200 turtles tagged with satellite tracking devices. Six of the turtles caught the researchers’ attention because, unlike their peers, they made distinct movements toward the North American coast. Adding to the intrigue, the “sentinels,” as the researchers called them, made their journey during the early spring months. A look at remotely sensed ocean conditions for the time period showed that the farthest-roaming of the sentinels swam through water significantly warmer than their peers had confronted on their travels.

A bigger picture analysis involved identifying the years loggerheads arrived in Baja California by measuring stable isotope “fingerprints” in the bones of sea turtles stranded on beaches there. Because like us, turtles are what they eat, these stable isotope signatures can reveal when the turtles transitioned from the open sea to the coast. The analysis showed significantly greater annual numbers of eastward-bound sea turtles during warm ocean conditions.

The likely cause, according to the researchers: the development of a “thermal corridor” from unusually warm sea surface temperatures due to El Niño and other intermittent warming conditions that allowed the turtles to cross the Eastern Pacific Barrier to coastal foraging grounds.

The corridor was present during the late spring and summer and was also preceded by early warming of temperatures in the months before it opened. Such anomalous conditions, especially if sustained for several months, may provide key environmental cues to sea turtles and other animals concentrated in the eastern edge of the central Pacific that the thermal corridor is opening. Studies combining data from loggerhead aerial surveys, at-sea-sightings, stranding records and tissue samples supported the hypothesis.

The phenomenon may be part of a trend. As the planet undergoes unprecedented climate changes, locations once considered impassable obstacles to species movements, like the Eastern Pacific Barrier, are being redefined. This, in turn, is shifting the distributions and migratory pathways of creatures ranging from sea birds to white sharks and presenting new conservation challenges.

For the North Pacific loggerhead, the trend could mean higher exposure to bycatch (unintentional fisheries harvest) off the Baja California coast and other potentially important North American foraging grounds, including the Southern California Bight. The study provides important insights, such as an understanding of how animal movements relate to climate variation, that could help predict when sea turtles and other protected species could be vulnerable to such threats.

The researchers caution that their multi-year dataset represents only a snapshot of an important developmental period for sea turtles. The small number of turtles that moved into the eastern North Pacific limits the ability to fully test the study’s hypothesis under varying conditions. To do that, the researchers call for more satellite tagging and stable isotope studies of turtle bones in this region.

Senior author of the study, Larry Crowder, explains: “Understanding how and why species like the North Pacific loggerhead move among habitats is crucial to helping them navigate threats. Emerging technologies and analyses can help illuminate these journeys.”