A recently developed global roads database has been used to calculate the impact of existing and planned road networks on habitat crucial for tiger survival. Scientists conclude that both tigers and their prey will be seriously affected.

By Alex Taylor on 10th May 2020 in Animal Conservation, Research, World Conservation Issues 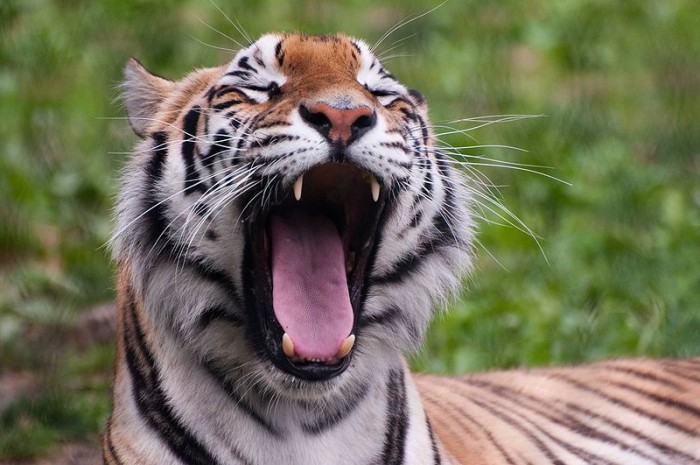 Nearly 15,000 miles of new Asian roads will be built in tiger habitat by mid-century, deepening the big cat’s extinction risk and highlighting the need for bold new conservation measures now, according to a new study.

University of Michigan conservation ecologist Neil Carter and his colleagues used a recently developed global roads dataset to calculate the extent and potential impacts of existing and planned road networks across the nearly 450,000-square-mile, 13-country range of the globally endangered tiger.

Fewer than 4,000 tigers remain in the wild. They are found mainly in South Asia and Southeast Asia, regions that will experience accelerating pressure from human development in coming years.

Of all the big cats, tigers are the largest, and the closest to extinction. As recently as 100 years ago, there were as many as 100,000 wild tigers living in Asia. Today, tigers occupy only 4% of their former range, according to the cat conservation organisation Panthera. Globally, tigers are listed as Endangered by the International Union for the Conservation of Nature, but two subspecies, the Malayan and the Sumatran tigers, are listed as Critically Endangered. Recently, a tiger named Nadia who lives at the Bronx Zoo was the first wild animal to become sick after contracting covid-19 from a person – an infected zookeeper. Four additional tigers and 3 lions have since also tested positive.

Road construction often exacerbates all three of the main threats to tigers: prey depletion, habitat degradation and poaching. This new study, published in Science Advances, showed that existing roads are pervasive throughout tiger habitat, totalling 83,300 miles (134,000 kilometres) in Tiger Conservation Landscapes (TCLs), blocks of habitat across the animal’s range that are considered crucial for recovery of the species. Carter and his co-authors called this finding “a highly troubling warning sign for tiger recovery and ecosystems in Asia.”

The researchers calculated three measures – road density, distance to the nearest road and relative mean species abundance – to characterise how existing road networks influence tiger habitat. They calculated current road densities for all 76 TCLs and summarised those estimates by country and protection status. In addition, they used published forecasts of global road expansion to calculate the length of new roads that might exist in tiger habitat by 2050, for each of the 13 tiger-range countries.

The main findings of the study are:

Neil Carter said: ”Our analysis demonstrates that, overall, tigers face a ubiquitous and mounting threat from road networks across much of their 13-country range. Tiger habitats have declined by 40% since 2006, underscoring the importance of maintaining roadless areas and resisting road expansion in places where tigers still exist, before it is too late. Given that roads will be a pervasive challenge to tiger recovery in the future, we urge decision makers to make sustainable road development a top priority.”

The world’s remaining tigers are concentrated in a small number of source populations – areas with confirmed current presence of tigers and evidence of breeding – across the animal’s geographic range. Even a small amount of road construction could disproportionately impact tiger recovery by permanently isolating tiger populations, creating tiger “islands,” according to the researchers.

Protecting tigers is a global conservation priority, exemplified by a landmark international initiative, called TX2, with the goal of doubling global tiger numbers between 2010 and 2022. And tigers are considered a conservation flagship species, a popular, charismatic animal that serves as a symbol and rallying point to stimulate conservation awareness and action.

Even so, few studies have assessed the impacts of roads on tigers and their recovery, limiting the impact of tiger conservation planning. And most previous “road ecology” studies of tigers have focused on localised patterns of wildlife mortality or behaviour associated with road design. The new study by Carter and his colleagues, in contrast, estimates road impacts on wildlife at broad scales. It is the first study to include baseline indices on the threat from existing and future roads in tiger habitat.

“This research opens the door to build partnerships at the regional scale to better mitigate existing roads and to develop greener road designs for the next century of infrastructure development,” said study co-author Adam Ford, a wildlife ecologist at the University of British Columbia.

The researchers say their metrics provide tools to support sustainable road development, enabling rapid risk assessment for roads passing through tiger habitat, including roads planned as part of the Belt and Road Initiative.

The BRI is a global development strategy adopted by the Chinese government in 2013 involving infrastructure projects in dozens of countries in Asia, Europe and Africa. The rush to build major new roads throughout the forested regions of South Asia and Southeast Asia, financed through the initiative, could have severe impacts on tigers, according to Carter and his colleagues. But the BRI could become an important partner in tiger preservation, according to the researchers, by adopting biodiversity conservation as one of its core values. That would set the stage for the BRI to plan and implement a network of protected areas and wildlife corridors to safeguard tigers from road impacts.