S is for Sandpiper 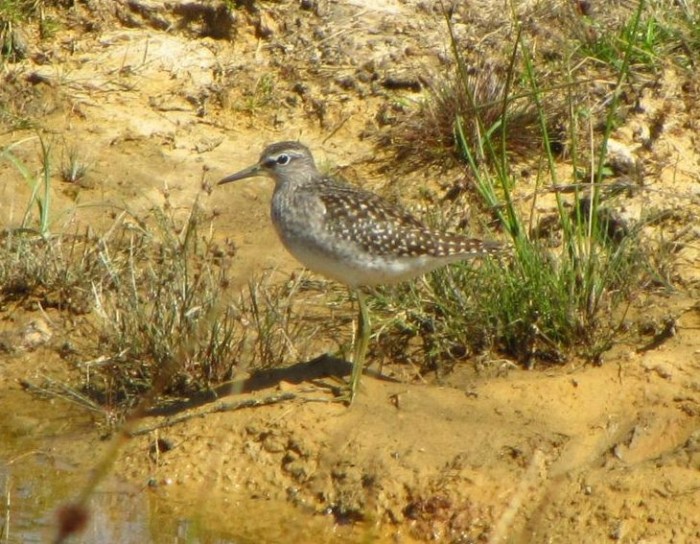 Many species of wading bird are known as sandpipers. In America it’s a common epithet applied to numerous dunlin-like Nearctic waders – and whilst dunlins and their cousins are all technically sandpipers, members of the family Scolopacidae, we use the common name more selectively in Europe. So for me, the word calls to mind the three easily confused ‘classic’ sandpipers: common, green, and wood.

With practice, they’re easy enough to tell apart. Common sandpipers are a little smaller than a blackbird, brownish on top and pale underneath. They bob up and down almost constantly whilst feeding atop dull yellow legs – a nervous bundle of readiness – before flying off low over the water on stiffly held wings. It is a common British breeding species on upland rivers and lakes, one of the charms of the highlands, and can also be seen almost anywhere on passage, with a few wintering in the south of the country. 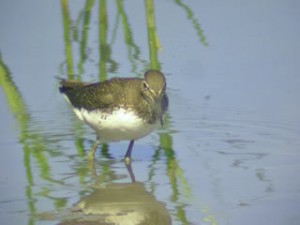 Green sandpiper is the commonest of the three during the winter, but a very rare breeder. It’s larger than the others, very dark plumaged above with a scattering of white spots. They have duller legs than common sandpipers, green-grey in colour, and in my experience bounce up and down somewhat less enthusiastically. When they fly, they show a diagnostic white rump patch and nearly always utter an alarm call.

Wood sandpipers, by contrast, are much less vocal. They are the rarest of our trio as a migrant, but perhaps a more common breeder than green sandpipers. The RSPB’s information on them reckons that recent flooding of some previously drained Scottish marshes will be good news for wood sandpipers in Britain, an intriguing and pleasing prospect. They possess a suitably rare elegance, appearing more lightly built than the otherwise very similar green sandpiper, tiptoeing on stick-like yellow legs. The very bold white stripe over their eye is the best feature to look for.

All three will often turn up at quite small patches of water, so it’s well worth keeping an eye on any under-watched local pond that offers at least a small shallow muddy bank suitable for a feeding sandpiper. Finding one in hitherto unsuspected places might be a long shot, but I have a hunch it would make your day. It would mine.

S is for Swallow

I swear autumn comes around quicker every year and so yet again one of our most beautiful, remarkable creatures will be starting to depart for African shores. In the words of Ted Hughes’ marvelous poem ‘Work and Play’ (which I was forced to study for GCSE English man years ago and still like, so it must be good):

“The swallow of summer, the barbed harpoon,
She flings from the furnace, a rainbow of purples,
Dips her glow in the pond and is perfect.”

Autumn is perhaps my favourite season, but nonetheless I’ll be sorry to see the swallows go.