It’s a woodland species, but will also be found in parks and gardens with mature trees, and is always a welcome sight: indeed, it’s one of the most common species for non-birders to notice and remark on.

By Chris Foster on 28th May 2012 in A to Z of British Birds, Bird Conservation 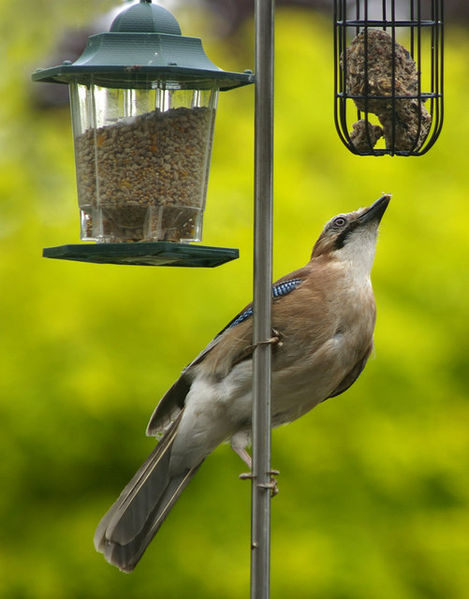 Two members of the corvid family are the only British bird representatives for the letter J, so this seems as good a time as any to focus on them. Starting with the obvious:

I’ve heard the jay described as the ‘British bird of paradise’, and it isn’t hard to see why. Eschewing the predominately black colouration common to most corvids, jays have a fantastic buff-peach plumage, set off by blazes of black, white and bright blue on their wings. That makes for a highly distinctive bird, especially so in the air, when they are easily recognised by a combination of white rump and fluttering, butterfly-like flight. It’s a woodland species, but will also be found in parks and gardens with mature trees, and is always a welcome sight: indeed, it’s one of the most common species for non-birders to notice and remark on.

For me, though, it’s the noises they make which are most noteworthy. The first clue to a jay’s presence is often a harsh, raucous, scratchy scream, perhaps from several birds simultaneously as they chase beneath the wood canopy. But the range of their vocalisations is astonishing and goes way beyond screaming – there’s a good collection online here which is worth exploring. They will not only mob but mimic predators such as tawny owls and buzzards, with uncanny accuracy. And in spring especially, jays even sing – not what one expects from a member of the crow family, but they are, after all, passerines or songbirds. Some of their quieter courtship calls have an almost eerie, otherworldly beauty.

Sound is also what gives jackdaws their name: a combination of the short, sharp ‘jack’ and nasal, drawn out ‘daw’ calls often given in flight. You’re almost certainly familiar with those sounds, even if you didn’t realise it, since jackdaws thrive in villages and towns, nesting in rookeries or even on buildings and chimney tops. These are used as a substitute for the cliffs and rocky outcrops on which they’d more naturally be found nesting.  Jackdaws might be your archetypal black crow on first glance, but they too are beautiful birds, sporting a silver sheen on their head feathers and a bright white eye.

Many of the crows used to enjoy a less than favourable reputation, perhaps because they are opportunistic feeders that will readily search through rubbish, carrion or other scraps, or raid nests for eggs and young birds. But to hold that against them would be a shame, for the crow family surprises and delights with its diversity and beauty, placing them deservedly amongst the charismatic and now best loved of British birds.