Despite being listed as threatened under the Endangered Species Act in 1992, conservation efforts haven’t come close to increasing their population, and haven’t even been able to halt their decline. 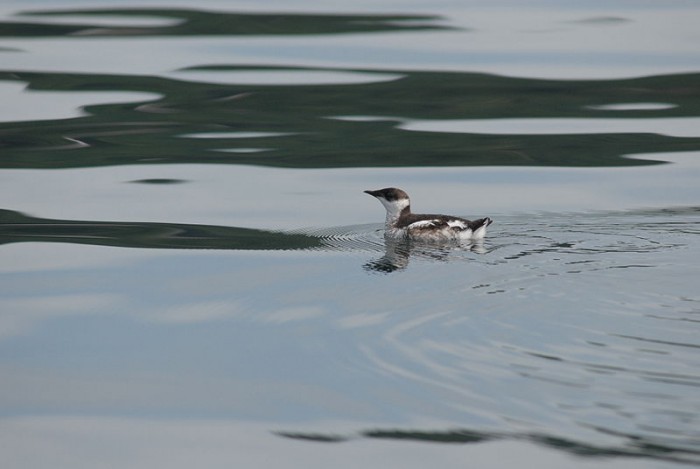 You may not have heard of a marbled murrelet, but it is one species that conservationists believe is being let down by the federal government of the USA. They are seabirds that feed at sea but nest in tall trees in old growth forests of the Pacific Northwest – in the states of Washington, Oregon and California. Murrelet numbers have been falling over the past century, a major cause being the loss of nesting habitat, thanks to logging, major fires and big wind storms. Despite being listed as threatened under the Endangered Species Act in 1992, conservation efforts haven’t come close to increasing their population, and haven’t even been able to halt their decline.

This was the conclusion of a major new study into the status of the marbled murrelet, prepared by the US Forest Service, the US Fish and Wildlife Service, the Washington Department of Fish and Wildlife, and a private research firm. Published in the journal The Condor, the results showed that in five different study areas across north western USA (areas that encompass all but one of the murrelet conservation zones identified in the Marbled Murrelet Recovery Plan) numbers fell sharply. Between 2000 and 2010, the total population decreased by nearly 30%, from around 23,700 to roughly 16,700. This is an annual average rate of decline of 3.7%.

The marbled murrelet is listed as endangered by the IUCN. Logging has caused their habitat to become fragmented, meaning that they have become more vulnerable to predation and wind and other disturbances at forest edges. Increased predation appears to be associated with the presence of more crows and ravens, which in turn has been linked to the presence of camp grounds and growing human settlements. The reduction in the quality and availability of the marine creatures that are eaten by the murrelets has also taken its toll.

However, the little seabird does have many people in its corner. Groups such as the Center for Biological Diversity, the National Audubon Society and Earthjustice (whose appropriate slogan is ‘because the earth needs a good lawyer’) have been in court to fight for continued protection of the forest the murrelets need for their survival. This is vital, as it has been shown that when their breeding habitat is reduced by logging, they do not relocate to other forest areas, they just die out. Recently, a court ruling in Oregon stopped timber sales and logging of three state-owned forests, and in Washington, D.C. conservationists are celebrating the rejection by a district court of a proposal to eliminate all critical habitat protections and a direct challenge to the protection of the murrelet as a threatened species. This lawsuit was the third attempt by the timber industry to eliminate their protections. With the help of conservation organisations, the marbled murrelets survived this latest attack, and their habitat remains protected. But for how much longer?