White-tailed sea eagles in Germany were tested for the stress hormone corticosterone, levels of which were particularly high in birds nesting close to roads and paths. This has implications for tourist use in areas of high eagle density. 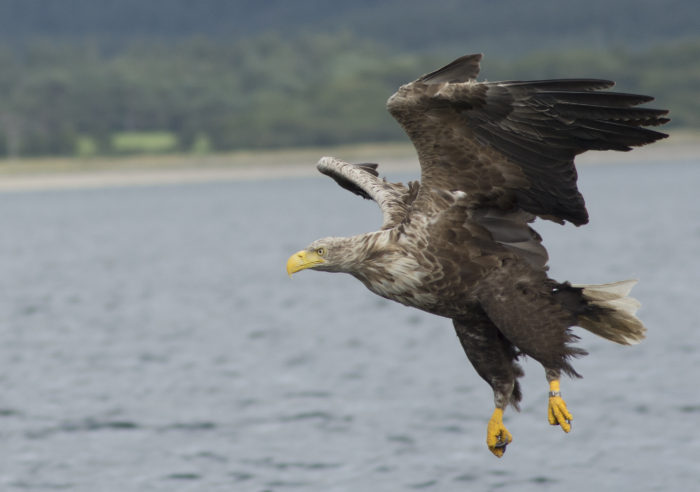 The white-tailed sea eagle is known for reacting sensitively to disturbances. However, research into which factors have which effects on the animals and how these impacts influence breeding success has so far only just begun.

A research team led by Dr. Oliver Krone from the Leibniz Institute for Zoo and Wildlife Research (Leibniz-IZW) has now measured concentrations of the hormone corticosterone and its metabolic products in white-tailed sea eagles in northern Germany and correlated these values with potential causes of “stress.” They found that the levels of corticosterone in the birds’ urine are higher the closer a breeding pair’s nest is to paths or roads. From this, the scientists derive implications for the management and protection of white-tailed sea eagles, in particular for protection zones around the nests. The study was published in the journal General and Comparative Endocrinology.

Important areas of distribution of the sea eagle in Germany, such as the Mecklenburg Lake District or the Baltic Sea coast, are also attractive tourist regions. As a result, visitor numbers in core breeding areas are high and continue to rise. Since typical tourist activities such as hiking, cycling, and water sports focus on experiencing nature, researchers see a potential conflict between visitors and the sensitive animals.

In order to measure the level of the hormone corticosterone in the eagles’ urine, they use excrement samples from 6 to 8 week old sea eagles in Usedom Island National Park, which they collected from leaves in the direct vicinity of the nests. Long-term data of the Leibniz-IZW sea eagle project were also used to determine the population density of the white-tailed sea eagles in the respective area, the breeding success of the sites and the distance of the nests to the nearest road or path.

Dr. Oliver Krone, lead author the study, explains: “By means of statistical tests, we were able to check the relationship between these long-term data and hormone levels. We were able to detect lower levels of corticosterone in samples collected at sites greater in distance from roads or paths.”

The relationship is statistically highly significant, demonstrating the negative effect of the “stress factor” road or path. However, Krone could not prove any negative influence of this factor on breeding success. “Whether breeding is successful at a given location does not seem to depend on the corticosterone level or the proximity to roads and paths,” he said.

Rather, there is a correlation between sea eagle density and breeding success: In already densely populated regions (more than two pairs per 121 square kilometres), the chances of having offspring are significantly lower than in regions thinly populated by sea eagles.

To prevent negative effects on the breeding performance, the scientists regard adjustments of the protection zone regulations as necessary. These regulations in the German federal states of Brandenburg and Mecklenburg-Vorpommern, for example, restrict forest and agricultural use within a radius of 300 metres of an eagle’s nest.

Krone says: “Hiking trails or riding paths have not been affected by this regulation so far.”  Yet, intensive tourist use, as is the case in Usedom for example, is proving to be just as “stressful” for sea eagles. “We suggest to exclude tourist use and development within a radius of 100 metres around the nests and to prevent any leisure activities off the beaten track, paths or roads in breeding regions. Car traffic on the road is not disturbing sea eagles at all, the animals can get used to it well. However, pedestrians and cyclists who pass too close to the nest pose a potential danger to the eagles.”