Amongst birders, sea watching has a reputation as being quite tricky –one for the specialists only. Perhaps for that reason I’ve tended to steer clear 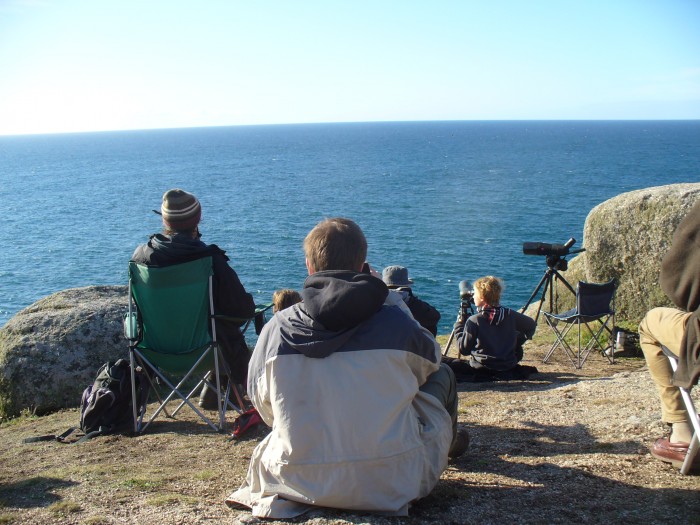 Forgetting the land on which we stand, just for a moment, imagine you are looking outwards from the coast of Britain, off towards the hazy blue horizon. The ‘inshore’ waters you’re now picturing play host to incredible ‘offshore’ creatures: drawn in by nutrient-rich currents that feed microorganisms, on which feed shoals of fish, which themselves are breakfast, lunch and dinner for an array of sharks, mammals and seabirds. You don’t need to visit the tropics to see amazing marine animals – they’re right at home in Britain, and you just need to go to the right place at the right time to see them – it’s time to try a spot of sea watching.

Amongst birders, sea watching has a reputation as being quite tricky –one for the specialists only. Perhaps for that reason I’ve tended to steer clear; however, after just a few minutes at Gwennap Head in Cornwall in September, I was hooked. It helped that this is one of the best sea watching spots in the country, and that we were lucky enough to visit on a day boasting a staggering total passage of over 2000 great shearwaters.

I saw several groups of them – mostly by following the directions of more experienced observers – steering skillfully from side to side just above the waves in characteristic shearwater fashion, all about a mile out. There were also many Manx shearwaters, smaller and with a distinctive black and white appearance from their dark upper-parts and pale under-parts. When four or five Manx-sized birds passed, but sporting duskier brownish plumage, Balearic shearwater was called. A superb third species of the morning.  I was amazed to find out, when researching the species on my return home, that they are listed as critically endangered – a passing visitor, but with global conservation significance.

In fact, Gwennap Head hosts a research project on migratory marine species visiting British waters, primarily with Balearic shearwaters in mind, as well as that gentle giant, the Basking shark. They’re also interested in recording ocean sunfish, turtles, storm petrels, skuas, seals, jellyfish – about anything you can think of. The project report should make fascinating reading when published, so why not read more about it at and keep up with the news at SeaWatch SW?

And if mammals are your thing, I’m no expert but I’ve still enjoyed watching dolphins in the Moray Firth, and the largest wild creature I’ve ever seen was a magnificent minke whale off the coast of the Isle of Mull. There’s a pretty long list of places you can go to spot these fabulous beasts on the BBC website. So enjoy researching your next sea-watching trip, and next week, I’ll come round at last to the ultimate point of my celebration of all things watery.