The Conservation of Sea Snakes

Although very little is know about these creatures, a lot of species appear on the ICUN Red List. Only one appears on the CITES list, the Laticauda crockeri, listed as vulnerable.

By Amy Featherstone on 17th October 2011 in Marine Conservation 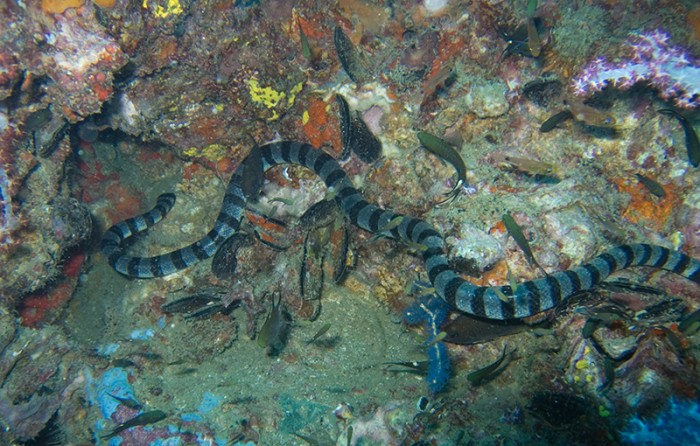 Sea snakes are a group of marine reptiles that live mainly in the tropical waters of the Indian Ocean and Pacific Ocean. All species of sea snake are venomous but not aggressive unless provoked. Although very little is know about these creatures, a lot of species appear on the ICUN Red List. Only one appears on the CITES list, the Laticauda crockeri, listed as vulnerable. The most concerning part of attempts to save sea snakes is that nothing is known of population trends. This means that any efforts to save them cannot be concluded to be successful or otherwise.

There are many reasons sea snakes are fished including their meat and their skin. Their skin can be used to many leather products as well as jewellery. It is also thought that their organs are harvested to be used for medical remedies, but not much is known of this practice. It is quite common to see sea snakes being handled as well as skinned and cooked in south-east Asia and India, despite their deadly bite.

There are no major efforts on sea snake conservation; I think this may be due to the lack of knowledge about them and their habits. There may be a lack of conservation interest as they are venomous, not very charismatic, and provide economic benefits to the small middle-eastern countries they are found in. In order to make any attempt at preserving these species, local attitudes towards them need to change through education. This can’t be done if we know nothing about them ourselves. We do not know what niche they occupy, or if they have any effect on the underwater world at all. In most species, we do not even know their preferred habitat or even how far down they can dive .

Conservationists need to learn more about these creatures before we can save them. Local people need to be educated, but also provided with something to replace that gap in their economy. Maybe if the sea snake was portrayed in a more interesting and charismatic manner, the tourist industry would make up for the loss of revenue from selling the skins for leather. Tourism will pose its own problems, but they can be more easily resolved then wiping a family of fauna from the planet. Sea snakes are interesting and very different from any other animal on the planet.

They need to be protected.