Home › Articles & Blogs › A is for Aphid, A to Z of British Insects

A is for Aphid, A to Z of British Insects

Aphids are small, squat, squishy-looking homopteran bugs, and are at first glance an unpromising introduction to insect conservation. 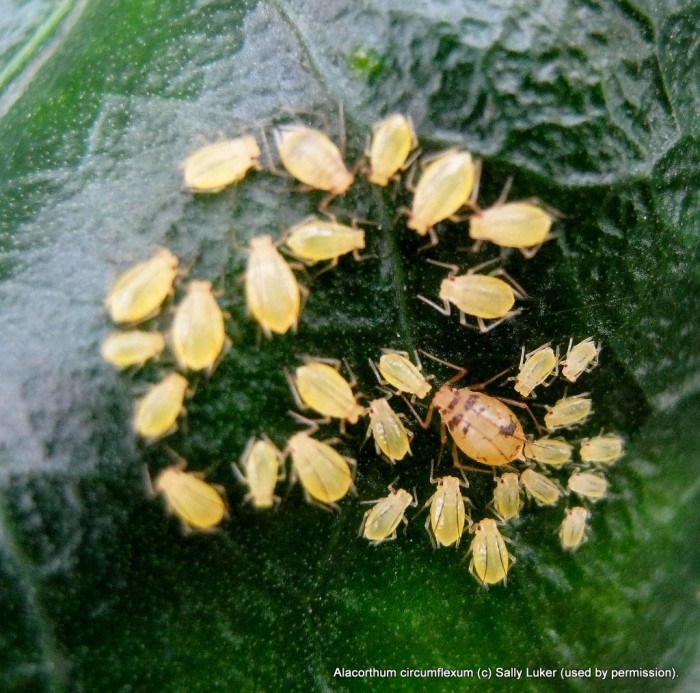 Aphids are small, squat, squishy-looking homopteran bugs, and are at first glance an unpromising introduction to insect conservation. But what they may lack in charisma, they more than make up for in intrigue. Contained within the nearly 600 species in the UK is a whole range of fascinating life cycles, behaviours and adaptations. Especially unusual to my vertebrate-oriented mind is the rarity of male aphids. Most species reproduce parthenogenetically for at least part of their life cycle, females giving birth to live clones with males only entering into the picture later to fertilise eggs (and add a little genetic diversity), eggs being better able to survive the winter than live young. Some species have done away with sexual reproduction altogether.

Their reproductive strategies make for rapid replication, with multiple generations in a year. Couple this with a typically monophagous existence – meaning that most, though not all, species feed on just one species of host plant – and it’s easy to see why aphids are not welcomed by gardeners. They’re also an important pest of cereal crops. All-out chemical warfare has been the typical response in the past, but there’s an increasing body of research which suggests that encouraging the many natural predators of aphids, such as ladybirds, is more effective in the long run, not to mention more environmentally sustainable. It’s also important to point out that the majority of aphid species are not pests.

In response to this predatory onslaught aphids have evolved a complex array of defence strategies. Most have abdominal tubes known as cornices, which exude a quick hardening fluid to protect their soft bodies, whilst the cabbage aphid (Brevicoryne brassicae) goes for a more offensive response by releasing volatile mustard oils.

Such set-upon creatures are also going to need a few friends to survive in this world, and fortunately aphids benefit from the protection of two remarkable eusocial animals: ants and entomologists. Ants ‘farm’ certain aphid species – quite literally herding a ‘flock’ into suitable feeding areas, protecting them from predators, and then milking them for honeydew, a sweet sticky liquid secreted from the aphids’ guts as they feed. On the surface this relationship appears almost unbelievable but, as David Attenborough points out in the clip below, both the aphid (280 million years old) and the ant (130 million) have been around long enough to evolve such complex mutualisms.

Entomologists are in pursuit of that rather more esoteric nectar, knowledge. And there are a lot of aphid unknowns, even in the densely populated British Isles. The world’s biggest species, the giant oak aphid (Stomaphis quercus), is native here. In size and colour it resembles a coffee bean, and it lives exclusively on the English oak with its sole farmer of choice, the Jet black ant (Lasius fuliginosus). It’s also rare enough that the conservation charity Buglife would like to know more about its range. The similarly sized large willow aphid (Tuberolachnus salignus) is much more common, yet there are no records of any life stage of the species for five months of the year. How it sees out the winter is not known. Active adults are often seen in cold spells in January or February, so surprisingly this is a good time of year to look for them and add to our knowledge of this mysterious insect.

With thanks to Sally Luker for the photos – more on Flickr