F is for Froghopper

Lurking under almost every mass of cuckoo spit in Britain will be a nymph of the common froghopper, Philaenus spumarius, on its way to becoming one of the highly variable adult colour morph – which range from mottled pale brown to almost solid black. 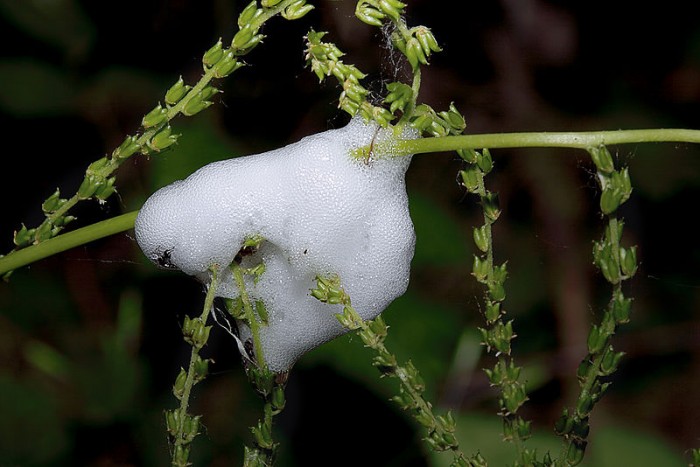 In the next couple of months, mysterious foam will begin appearing across the land. In gardens, parks, meadows, hedgerows and woods, the substance seems to appear on plant stems and leaves almost overnight. It’s most commonly known as cuckoo spit, since its arrival coincides with the first calling individuals of that bird species to make it into Britain from Africa. Of course, imagining that this ‘spit’ is extruded from the beaks of birds for some unknown purpose hardly seems a logical explanation, and was probably never anything more than a whimsical fancy.

The real secret behind ‘cuckoo spit’ is much more interesting than coughing Cuculidae anyway. It’s a froth produced by the nymphs of smallish Hempiteran insects known as froghoppers, which they manufacture by blowing bubbles into the plant saps on which they also feed. This custom-made nursery serves to protect the delicate nymphs from drying out, as well as hiding them from predators.

Lurking under almost every mass of cuckoo spit in Britain will be a nymph of the common froghopper, Philaenus spumarius, on its way to becoming one of the highly variable adult colour morph – which range from mottled pale brown to almost solid black. They’re so common that it’s hard to walk through any decently lush patch of vegetation in late spring without coming out with cuckoo spit on your trousers, with probably a few dislodged tiny, green nymphs clinging on for dear life as well.

There are a handful of other species in the Aphrophoridae family (see the British Bugs website for species accounts) most of which are more specialist than P. spumarius and therefore generally found on a specific plant or habitat. One very striking red and black species is Cercopis vulnerata, for which the English name is the very appropriate ‘red-and-black froghopper’.

But those wishing to catch and study some adult froghoppers will need to possess sharp reactions. Their hind legs are so specialized for jumping they’re not really used for walking at all. Instead, they act as a powerful catapault which can exert a force equivalent to 400 times the froghopper’s body weight, launching it well over half a metre into the air – gram for gram a more impressive performance than of that famed leaper, the flea. Not bad for something which starts off life in a puddle of spittle.