C is for Carpet Beetle

Members of the family specialise in scavenging a variety of plant and animal matter from hair and dry skin to pollen to dead insects, which probably explains the long-dead specimens resembling the aforementioned A.verbasci littering the deceased-fly-detritus rich windowsills of a rather crumbling flat I lived in last year. 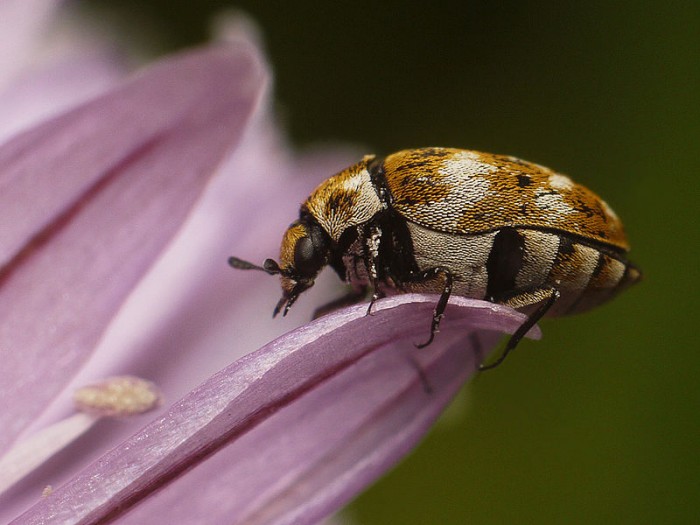 Carpet beetle is one name given to members of the family Dermestidae, some of which are also known as hide, larder or leather beetles. They’re small – between 1 and 12mm – round or ovoid, and covered in small scales, and are mostly quite nondescript (though the common Anthrenus verbasci, variegated carpet beetle, is quite attractively patterned). Of the 600 or so species worldwide, 39 are found regularly in Britain. Members of the family specialise in scavenging a variety of plant and animal matter from hair and dry skin to pollen to dead insects, which probably explains the long-dead specimens resembling the aforementioned A.verbasci littering the deceased-fly-detritus rich windowsills of a rather crumbling flat I lived in last year.

I spoke to Dr. Graham Holloway at Reading University (who oversees the national Dermestid recording scheme) and asked why people should be interested in these seemingly insignificant little insects. In short, his answer boiled down to their eating habits: the clue is in the name. At one time all carpets would have been made of natural fibres and therefore would be quite attractive to natural fibre feeding Dermestids, not to mention wall hangings, clothes, and many other household items. As he explained, the rise of synthetic fibres and the relative cleanliness of modern buildings mean that carpet beetles are not the everyday domestic problem they might once have been. However museums housing collections of tapestries or, more pertinently for entomologists, valuable sets of type specimens (which often have the added historical interest of being collected by famous naturalists like Darwin or Wallace) can suffer huge damage at the hands, or should I say mouth-parts, of hungry carpet beetle larvae.

The flesh-munching powers of Dermestes maculatus and a few other species have actually been harnessed for good by natural history museums, which use them to naturally clean skeletons where using chemicals might damage fragile bone structures. See this incredible time lapse footage of them getting to work on a scarlet macaw for a demonstration. But on the whole the family is not a welcome guest indoors, and it’s therefore worth paying attention to carpet beetles if you do happen across some. They may not be the most charismatic insects, but without studying their basic biology and distribution it would be a lot more difficult to guard against potentially expensive damage. Every record submitted helps to build up that bigger picture, so in that spirit do consider submitting records to the national scheme using the contact details here, or try exploring the superb multi-taxa recording possibilities of iRecord. Identification to species without a key might prove tricky, though photos of all the British Dermestidae species are linked from Mark Telfer’s very useful beetle web pages. If you’re not able to identify the species with any confidence, I’m sure Graham Holloway would be happy to receive a specimen in the post. Just please be sure it’s carefully contained!