As it has a thin and streamlined shell it can burrow in wet sand (and swim) very quickly with the help of its strong foot. It gets its common name because the shell looks like a straight razor and it can be very sharp. 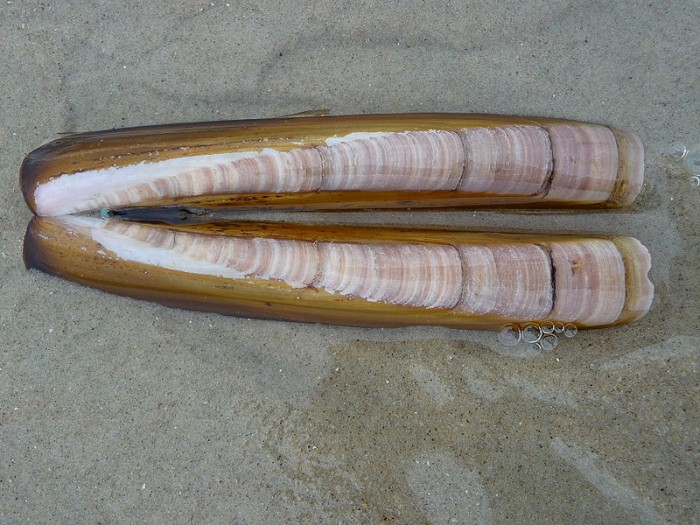 This week, E is for Ensis directus otherwise known as the ‘American Jack Knife Clam’ or ‘Bamboo Clam’. It is also commonly known as the ‘razor clam’ but there is a species native to Europe (Ensis magnus) which is also called the razor clam. E. directus is found in the intertidal or subtidal zones of sandy or muddy estuaries and bays. As it has a thin and streamlined shell it can burrow in wet sand (and swim) very quickly with the help of its strong foot. It gets its common name because the shell looks like a straight razor and it can be very sharp.

E directus has a thin, elongated shell that is slightly curved. It ranges from yellowish to dark brown in color. The length of E. directus is about six times its width and can grow to be about 10 inches long. It has a coating around its shell to protect it from eroding in the mud or sand. E. directus is a bivalve, which means that its shell has two parts. Its body is surrounded by the mantle which is separated into two parts. Each part of the mantle secretes a shell which is usually identical and are made up of calcium carbonate and protein. The two shells are connected by an elastic ligament that allows for it to open and close. It has a huge foot that allows it to move through water or to burrow in the sand. When the foot is extended all the way, it is almost as long as the clam’s body.

You can identify the position of E. directus in the sand at low tide by a keyhole-shaped opening that it uses for air. If you disturb the clam in the burrow, a small jet of water will squirt out of the hole as the clam digs. The clam is difficult to catch as it can dig faster than a human can. The easiest way to catch the jack knife clam is to pour salt into the previously mentioned holes. When the clam comes out of the hole to escape the salt, it can be grabbed and pulled from the ground. As this is time consuming, the species is not usually fished commercially, however many places do regard it as a delicacy.

The E. directus originates from the American east coast, and came to Europe through the transport of its larvae in the ballast water of cargo ships. In 1978, the first shells of the American jack knife clam were found on the Elbe estuary, Germany. Soon, the whole coastline was populated as it is an opportunistic species. It was first observed in the UK in 1989 in Norfolk and currently it is found at sites along the British east coast south from the Humber and along the English Channel west as far as Rye Harbour, East Sussex. Local economies can benefit from this species, as it can be fished and consumed, although the clam is also known to damage fishing nets. Although the species may serve as food for sea birds, it is also feared that the American jack knife clam might negatively influence local biodiversity and is thus characterised as a harmful exotic species in Europe.