It is an invasive species of seaweed in the family Codiaceae and originally from Japan. 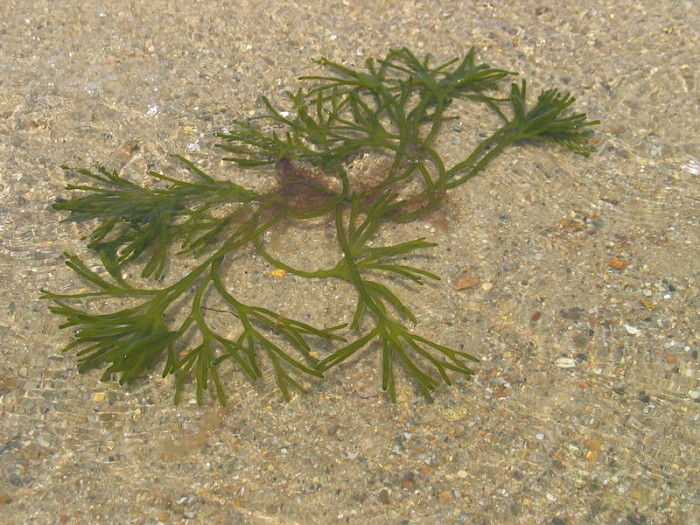 Image: By Flyingdream at en.wikipedia [Public domain or Public domain], from Wikimedia Commons

This week, G is for the Green Sea Fingers, (Codium fragile fragile) otherwise known as the green fleece, oyster thief or the sputnik weed. It is an invasive species of seaweed in the family Codiaceae and originally from Japan.

Codium fragile fragile is a large branching green alga which typically grows between 15 to 60 cm tall but can grow to almost 1m in length and can weigh up to 3.5 kg. In areas of high wave exposure, the C. fragile fragile plants tend to be shorter as they undergo more frequent fragmentation.  The branching of the seaweed is dichotomous (dividing into two) with individual branches between 3 – 10 mm in diameter. A spongy basal holdfast anchors the plant to the substratum which juvenile stages can appear as moss-like mats. The gametes of the green sea fingers can germinate with or without fertilisation (parthenogenesis) and adults can grow from fragments. This makes them hard to eradicate.

Codium fragile fragile has wide environmental tolerances including an adult temperature range of -2°C to 34°C and a breeding temperature range of 10°C to 24°C. The alga can live in salinities of 12ppt to 40ppt but can only breed in 12ppt to 48ppt. This means that they are commonly found in estuarine conditions and of depths from 0m to 15m as it has low light requirements. The alga must attach to hard surfaces, such as rocks and ship hulls, to survive. Taking this into account, the species can potentially be further introduced into the UK via aquaculture, fouling of vessel hulls, nets and ropes. Studies have shown that the green sea fingers can survive emersion of up to 90 days and in that time can travel long distances on ships.

The distribution of Codium fragile fragile is widespread, however, there are inconsistencies with regards to its abundance and community dominance at different locations. Populations around Europe, although occurring regularly, are small in comparison to the pest numbers found in New England, USA, Nova Scotia and Canada. In these locations, potential impacts are wide and varied. These impacts include the smothering of mussels and scallops to prevent their valves opening and hindering the harvesting process for shell fisheries. The also foul nets and ropes, which aids their dispersal as well as man-made structures such as pylons and jetties. From a natural ecology point of view, they can change the ecology of a location with flow on effects to other species and can reduce native biodiversity.

It has been suggested that preventing further introduction of the alga would be far more effective than containing established ones. This would involve ensuring that aquaculture equipment, ropes, nets, boat hulls and any fishery stock were cleaned and free of C. fragile before coming into UK waters. The difficulty is ensuring all of the growth stages of the alga are removed from shellfish, however, this can be achieved by using solutions of 4% hydrated lime for 5 minutes or in saturated brine for 15 minutes. The gametes of C. fragile are short lived and thus introduction via ship ballast water is unlikely. Removal of adult and juvenile stages from equipment can be achieved with thorough cleaning at the site or as close as possible, it is therefore critical that adequate wash-down areas are provided for recreational boat users. If this was to be the case then signs would need to be erected to provide boat users with information regarding the alga and ways they can help to prevent its spread.