A. armata was introduced into Europe by the importation of oysters. The harpoon weed was first detected in Algeria, 1923 and probably spread to Britain via rafting or floating. Here in the UK, the weed was first recorded in 1949 in the Bristol Channel, on the island of Lundy in the asexual phase. 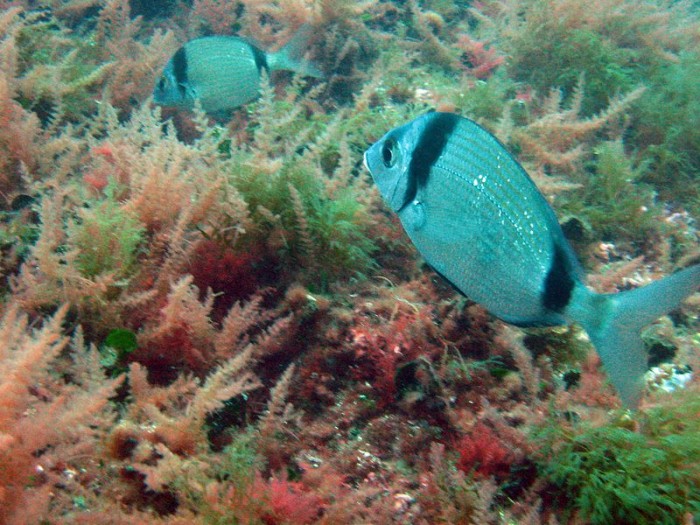 Image: This photo has been taken by Matthieu Sontag (User:Mirgolth) and released under the licenses stated below. (Own work) [GFDL (http://www.gnu.org/copyleft/fdl.html) or CC-BY-SA-3.0-2.5-2.0-1.0 (http://creativecommons.org/licenses/by-sa/3.0)], via Wikimedia Commons

This week, H is for the Harpoon Weed (Asparagopsis armata) which was originally found in Australia and New Zealand (although it is unknown which island it is native to). It is a deep water, red algae and has been known to grow up to 15cm. One interesting point about this species is that it has been identified by two scientific names during different phases of its lifecycle as its asexual phase was previously identified as Falkenbergia rufolanosa. Both life-phases of the plant are almost totally different and it is easy to see why they were thought to be two different species. I will go into the difference between the two life stages later. The algae produces its gametes from June to September, depending on the conditions of the water.

A. armata was introduced into Europe by the importation of oysters. The harpoon weed was first detected in Algeria, 1923 and probably spread to Britain via rafting or floating. Here in the UK, the weed was first recorded in 1949 in the Bristol Channel, on the island of Lundy in the asexual phase. The gametangial condition (when gametes develop) of the A. armata was first recorded from Cornwall  in 1950, and this was the first time it was seen on mainland Britain. The species has been successful because it has little predation, a rapid growth rate and it is an opportunistic species (species that can colonize newly disturbed or polluted sediments).

Currently, A. armata is distributed throughout the British Isles, although  it is uncommon on the east coast. In Europe, the populations can be found from the western Mediterranean to the Shetland Islands and it is especially common on the coasts of Spain. The factors that are likely to stop the spread and distribution of the species is the lethal temperatures and temperatures that are required for reproduction. The hooked branches of the harpoon weed are likely to spread by attaching onto floating objects. The sexual (gametophyte) plant is found in the shallow sublittoral or in deep littoral pools attached to other algae by its barbed axes. The asexual (tetrasporophyte) plant is typically found sublittorally and is epiphytic or free-living, however this is not as common.

The sexual plant is very delicate, yet can grow up to 30 cm tall, with barbed branches. The colour of the sexual stages of the harpoon weed is rosy pink, yellowish-pink or whitish-pink in colour. The thallus (a plant body that lacks true roots and a vascular system) has prominent major axes, which are bare in lower parts but densely tufted above. The plant is attached to other algae by simple hair-like protuberances called rhizoids. The asexual plant is rose-pink in colour, and it is formed of multiple barchans that are irregular and are usually aggregated into spherical masses of around 1-3 cm in diameter.