S. muticum was first found attached in Bembridge, Isle of Wight, in 1971 where it most likely had arrived from France. 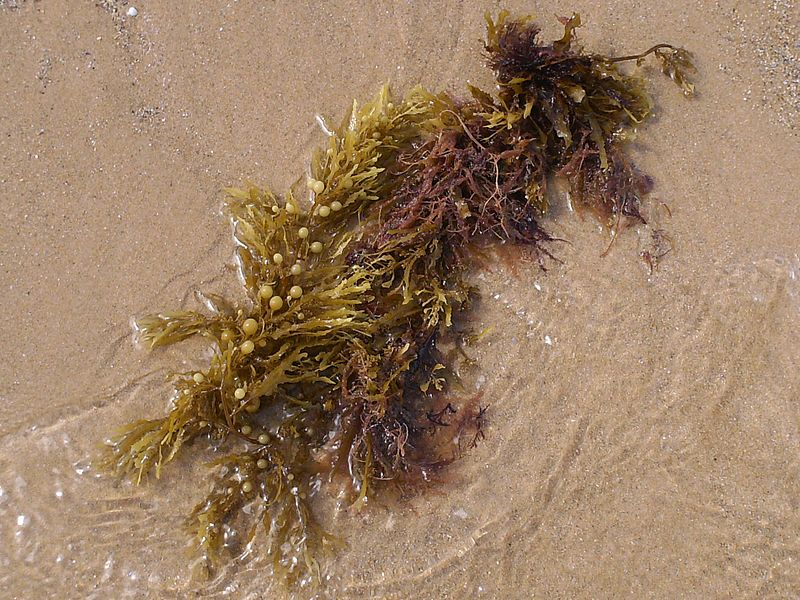 This week, W is for the wireweed which has the scientific name Sargassum muticum. Other common names for this species include Japweed, Japanese Wireweed, Strangle weed and in Wales it is known as Sargaswm Japan. S. muticum is a large brown seaweed that grows attached to rocks by a perennial holdfast up to 5 cm in diameter. From this holdfast the main axis (equivalent to a stem in terrestrial plants) grows to a maximum of 5 cm high. The leaf-like laminae and primary lateral branches grow from the main axis. In warm waters it can grow to 12 m long, however in British waters it gives rise to a single main axis with secondary and tertiary branches which are shed annually. This means the maximum size it has been found in Britain is around 2 meters. Numerous small 2-6 mm stalked air vesicles provide buoyancy. The reproductive receptacles are also stalked and develop in the sides of the laminae and are 1-2cm in length. It is self-fertilising meaning that they can breed with themselves, this is rather common in flora.

S. muticum was first found attached in Bembridge, Isle of Wight, in 1971 where it most likely had arrived from France. It is thought that the wireweed was most likely first in the English Channel between 1966 and 1970. From here, it spread rapidly along the south-coast of England at an approximate rate of 30km a year to the Isles of Scilly. It is now found on the entire Channel coast and east coast north to Suffolk, however the Norfolk population appears to have died out. There were specimens found drifting in south Wales in 1983, Constantine Bay, north Cornwall, in 1992 and then Lundy in 1993. Northern Ireland has also not escaped the spread of S. muticum as attached specimens were spotted in Strangford Lough, in 1995 (Boaden 1995). Elsewhere in Europe it is found from the Mediterranean and along the North Sea and Atlantic coasts of Portugal, Spain, France, Belgium, The Netherlands, Denmark, southern Norway and Sweden.

As its common names may suggest, this species naturally occurs in Japanese waters as well as the coasts of China. It was most likely introduced unintentionally with commercial oysters (ring any bells anyone?) from rather British Columbia, Canada or from Japan.  The overall consensus is that it was first introduced into northern France and from there it rather spread by; spores in ballast water or on ships hulls or that entire plants rafted and floated. The current school of thought on this matter is that the dispersal most likely occurred by the natural, floating method. By using this method of dispersal, S. muticum can spread up to 30 miles. If you add this large dispersal to the rapid growth rate and the fact that it can produce a lot of spores that can float and survive for 3 months, it is no surprise that this species has been so successful in many parts of the world.

In the UK, there has been an attempt to totally eradicate S. muticum, but it was not successful. This is because removing Wireweed by hand is extremely time-consuming and needs to be repeated, probably indefinitely. Removal by trawling, cutting and suction have also been tried but yet again failed. Chemical methods using herbicide have been tried but failed due to lack of selectivity and the large doses needed. Small germlings can be consumed by molluscs and amphipods but this has no restrictive effect on the populations nor the spreading of S. muticum. Whatever method is used the alga always quickly regrows and effective methods for its permanent removal have not been found, although cutting and suction is the preferred method applied. The species is thought to be of high priority and must be eradicated from our shores. It causes the physical displacement of native species through over-growing and shading underlying species, there is documented replacement of Laminaria saccharina and Zostera marina at Grandcamp on the French Atlantic coast. In Britain, there is observed growth of S. muticum on eel-grass beds in the Isles of Scilly and in deep pools and channels Halidrys siliquosa can be displaced as the dominant species.

This species is regarded as a pest and fouling organism which is reported to interfere with recreational use of waterways, particularly when it becomes detached from hold fasts and floats off forming large masses where it can block propellers and intakes. It is also a fouling organism on oyster beds and a nuisance to commercial fishermen, fouling their nets. On a positive note, my study found that S. muticum aided the dispersal of a lot of our native marine invertebrates including amphipods and crabs (as well as fish larvae). It was more effective of aiding dispersal than any of our native species. This species is now very common on a large amount of our shores and its spread and growth is very well documented.