C is for Caprella mutica, an A-Z of Invasive Marine Species

C. mutica belongs to a peculiar group of marine amphipod crustaceans. The head has two pairs of antennae and the body has multiple segments (pereonites), most with a pair of limbs (pereopods). Caprellids have long, thin bodies, and greatly reduced abdomens. 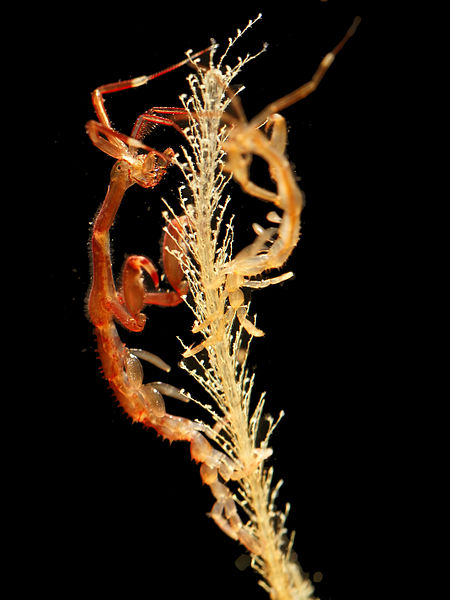 This week, C is for Caprella mutica, commonly known as the Japanese skeleton shrimp. This is a species of skeleton shrimp and is a  relatively large caprellid. They are known to reach a length of 50mm. The Japanese skeleton shrimp is a marine amphipod that has spread around the globe from its native home in northeast Asia. They are sexually dimorphic, with the males usually being considerably larger than the females. They are identified by their “hairy” first and second thoracic segments (body segments) and the rows of spines on their bodies. Overall, it looks a bit like a cross between a stick insect and a praying mantis.

C. mutica belongs to a peculiar group of marine amphipod crustaceans. The head has two pairs of antennae and the body has multiple segments (pereonites), most with a pair of limbs (pereopods). Caprellids have long, thin bodies, and greatly reduced abdomens. Their typical posture is standing erect, swaying in the current, and holding their enlarged second claws (gnathopods) in a mantis-like pose, ready to grab passing prey. They blend in well, as their body shape and colour often match the background. They are originally red in the brood pouch, but their colour can change to green or blue depending on their local environment.

Adult C. mutica are usually found in temperatures ranging between –1.8 °C and 26 °C and salinities greater than 20 ppt (parts per thousand). They are opportunistic feeders, consuming everything from decaying plant and animal matter to diatoms, macroalgae, other crustaceans, and the food for farmed salmon. This species can reproduce within a month of hatching, and large females can produce over 300 eggs in a single brood. Reproduction can occur all year round, but it is typically greater in the months of spring and summer, when populations are known to explode. The highest densities have been recorded on a salmon farm in Scotland (300,000 shrimp per m2). This alien species is now well established outside its original range. With its wide environmental tolerances, rapid growth, early reproduction and high population densities, variable feeding habits, and penchant for settling on artificial structures and vessels, it is likely to become widespread in the UK.

As a result of their high densities and reproduction rate, caprellids provide a valuable food source for fish, crabs, and other larger predators. Despite their slenderness, caprellids are an excellent food because they are known to contain high levels of polyunsaturated fatty acids and carotenoid pigments. Because of this, they make a nutritious snack for a diverse range of marine predators.

C. mutica are native to shallow protected bodies of water in the Sea of Japan. In as little as 40 years, they have become an invasive species in the North Atlantic (including our UK), North Pacific, and along the coasts of New Zealand in places like ports, aquaculture facilities, and oil rigs. It is not known for sure how they were introduced, but it is believed to be due to maritime traffic (in ballast water or as hull fouling) and aquaculture. We know that its spread occurs along multiple routes, and the amphipod may use numerous ‘stepping stones’ as it moves from place to place. Short-distance travel is most likely via recreational boating, drift seaweed, passive drift, and aquaculture. They are often found on another alien species, Sargassum muticum. Outside of their native range, C. mutica are often exclusively synanthropic (ecologically associated with humans), being found in large numbers in and around areas of human activity. Their ecological and economic impact as an invasive species is unknown, but they pose a serious threat to native populations of skeleton shrimp in the affected areas.