One of the reasons why this D. villosus has colonised so many different countries and habitats is due to its high tolerance levels. 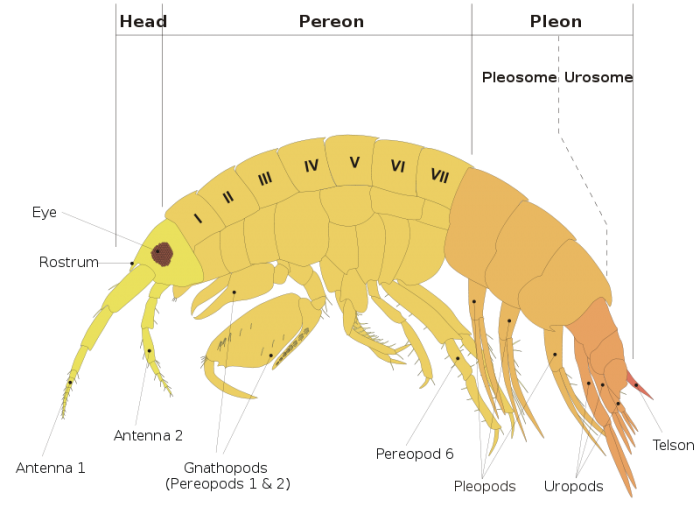 This week, K is for the killer shrimp (Dikerogammarus villosus) which is a species of freshwater amphipod. I know what you’re thinking “fresh water, but this is a marine blog!” BUT this species is found in estuaries, so I think we can blur the boundaries a little for one of my favourite species.

D. villosus is native to the Ponto-Caspian region of eastern Europe (from western Ukraine to western Kazakhstan) , but which has become invasive across the western part of the continent. In the areas it has invaded, it lives in a wide range of habitats. It got its common name (of the killer shrimp) because it kills many other animals, often without eating them although it is a ferocious predator. The killer shrimp hunts both invertebrates and small fish and is so destructive that it can significantly alter the ecology of an area. To make things worse, the species is very fast growing, reaching sexual maturity in 4–8 weeks. As it has moved through Europe it has threatened other species and has already displaced a large amount of native amphipods.

D. villosus was originally found in the lower courses of large rivers in the Black Sea and Caspian Sea drainage basin, since then it has become an invasive species across central and western Europe. It is thought to have first escaped from the Danube in 1992 when the Rhine–Main–Danube Canal was opened and has since spread to nearly all the major rivers in western Europe. The killer shrimp was first spotted in the UK in 2010 in Grafham Water, Cambridgeshire and from there has spread throughout Britain. It is actually unknown how the species has managed to invade these other rivers, but it is thought to be due to fishing activity (can you see a pattern here?). It is a bit different though as its spread is thought to be related to the introduction of the zebra mussel (Dreissena polymorpha), however there was a few years difference. It is thought that zebra mussels change habitats by increasing the amount of benthic organic matter, which benefits D. villosus by helping them to outcompete other species.

D. villosus can grow up to 30 millimetres (1.2 in) in length, which is rather large for an amphipod (especially a freshwater one). It is more commonly 10-20mm in length. A key identifying feature is the presence of cone shaped protrusions on the tail, just above the uropods. The species sometimes has a striped appearance although it can vary between yellow to black in colour. It has relatively large mandibles (mouthparts to hold or bite prey) which is what allows it to be such an awesome and effective predator. Interestingly, D. villosus is not as aggressive in its native habitat, nor is it even the most abundant. So one current research question is to find out why they act this way in other waterways. Surely, the species would be more aggressive in waters where there is a large amount of competition, but this does not seem to be the case.

One of the reasons why this D. villosus has colonised so many different countries and habitats is due to its high tolerance levels. The killer shrimp is able to tolerate temperatures from 0°C–30°C (but only breeds in temperatures above 13°C), as well as low oxygen concentrations, and salinity up to 20‰. There also doesn’t seem to be much limit to its habitat range as it is found in canals, lakes and rivers as well as living in a range of substrates. Another reason for the success of D. villosus is that it is omnivorous and actively feeds on a variety of invertebrates, including other species of Gammaridae. It kills its prey by biting it with its large mandibles and then shreds it before eating it.

I think that I am giving the killer shrimp a bit of a bad reputation here, they are actually gentle while mating and the female is carried on the back of the male for a little while. Males do not need to actively compete to mate with a female as there are more females than males in every known established  population. Each mating pair produces an average of 27 eggs, but up to 50 eggs can be laid in one go. The young animals become sexually mature once they are 6 mm in length and after moulting several times (as said before, this takes around 4-6 weeks).

This species is on the NNSS (Non-Native Species Secretariat) watch list and any potential species records should be sent to alert_nonnative@ceh.ac.uk with a photograph. It is also illegal to release this species into the wild or allow it to escape, something to keep in mind when studying freshwater and estuaries.