Home › Articles & Blogs › B for Botrylloides violaceus, an A-Z of Invasive Marine Species

B for Botrylloides violaceus, an A-Z of Invasive Marine Species

Each colony of Botrylloides violaceus consists of many small individuals called zooids, that are arranged in elongated clusters called systems, within a firm matrix. 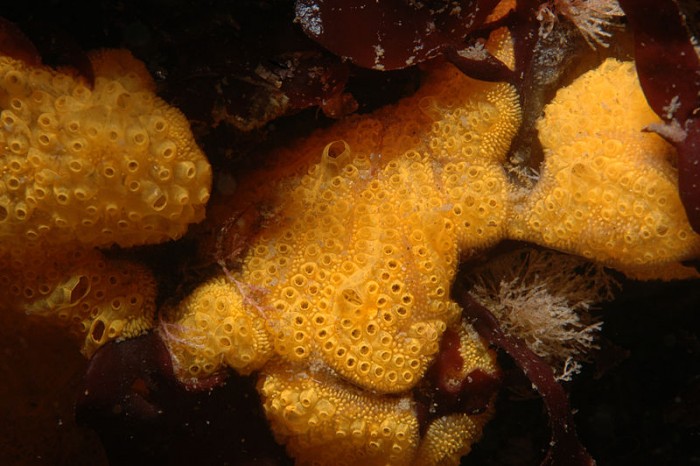 This week, B is for the Botrylloides violaceus, a type of colonial sea squirt. It forms flat sheets that are irregular in shape. Large colonies can reach over a foot in diameter and can be up to 3mm thick. It grows on a variety of surfaces, including docks, boat hulls, buoys, ropes, pilings, the undersides of rocks, and seaweeds. In the UK it has been found in shallow waters in the south, where it usually grows on artificial surfaces. However, it has also been found to overgrow mussels, barnacles, encrusting bryozoans and other species of sea squirts. Botrylloides violaceus was first observed in the UK in 2004, where it made the journey from Japan where it can survive over a salinity range of 26-34 parts per thousand (ppt) and a temperature range of 8-25°C.

Each colony of Botrylloides violaceus consists of many small individuals called zooids, that are arranged in elongated clusters called systems, within a firm matrix. These systems are in the shape of long ovals or meandering, occasionally branching, double-rows or chains. Each zooid pumps water through its body, filtering out food particles. The species is uniform in colour and can be dark brown, brick red, orange, purple and yellow and it is these zooids that give the species that colour. However in the older specimens, it has been observed that the normally clear matrix can turn into the same colour as the zooids.

A single colony may consist of dozens of zooids, which are oval or teardrop-shaped and about 1-2 mm long when viewed from above. Throughout the matrix there are networks of transparent blood vessels. These blood vessels have dead ends that are visible as small pigmented blobs (the same colour as the zooids) and are embedded in the clear matrix between the systems and around the edges of the colony.

At the top of each zooid there is a small opening, called the oral aperture, with 16 small tentacles around the inside. Water enters through this opening into a sac that occupies a large proportion of the zooid’s interior. The sac is pierced with holes, called stigmata, that are arranged in horizontal rows of 10 or 12 and the second row from the top is significantly shorter than the other rows. As water passes through these stigmata, the zooid captures food particles and absorbs oxygen. The water leaves the zooid through another opening called the atrial aperture, with the atrial apertures of several zooids discharging into a common space within the double row of zooids from which the water then exits the colony.

Eggs are incubated in brood pouches that protrude from the zooids into the clear matrix, with 1 egg per pouch and 1 or 2 pouches per zooid. The eggs develop into tadpole-shaped larvae with 24-34 finger-like buds, called ampullae, on the head. Depending on the season (July to September) it is possible to see the larvae within the colony due to their large size (about 1 mm in body diameter) and spherical shape. The larvae are even easier to spot because they are usually dark pink or purple, regardless of the colour of the colony. When released from the colony, a larva spends less than a day in the water column before attaching head-down onto a firm surface. The settled larva metamorphoses into a zooid, which buds others off to the sides to form a new colony.