It has been in Britain for a long time, as the first (live) specimen was recorded in the Humber in 1864 but then died out in 1907. But that was not the end for the little neck clam in Britain. 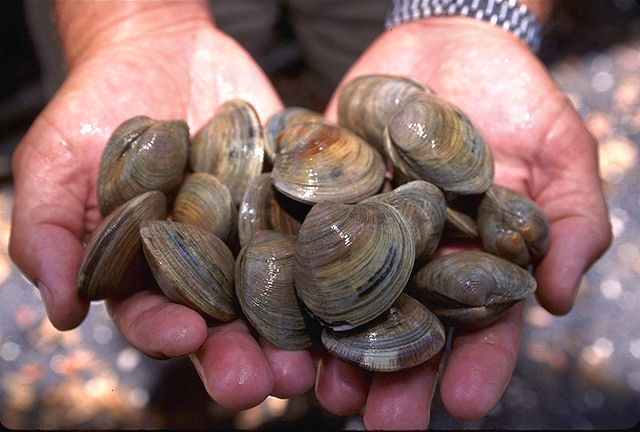 This week, L is for the little-neck clam (Mercenaria mercenaria), it is also known as American hard-shelled clam, little-neck clam, quahog or cherry stone clam. It is an edible marine bivalve mollusc that is originally from eastern North America, from Yucatán, Mexico up to Nova Scotia, Canada. It has been in Britain for a long time, as the first (live) specimen was recorded in the Humber in 1864 but then died out in 1907. But that was not the end for the little neck clam in Britain, it was spotted again in 1925. As you may expect from its natural dispersal, M. mercenaria was probably introduced from New York, USA, to Southampton (in 1925). It was this introduction that led to the establishment of a self-sustaining population.

Unlike most other marine species in this set of blogs, M. mercenaria was introduced deliberately to be tried as bait for various eel species. In America, it is commonly known as the Quahog and used to make clam juice. Due to the colouration of the shell, the native American Indians utilised the shell as ‘wampun’ for use as currency. Some of the introduced individuals were placed in the River Test, in the cool water discharge from a power station. However, it is thought that the current point of introduction is under the Eastern Docks in Southampton Water. It has also been debated that some clams may have been thrown overboard into the area by transatlantic liners docked in the port but this is highly unlikely as there is currently no evidence to support this. Interestingly, some of the deliberately imported individuals were placed in Dorset. Although this population survived for some time, they do not appear to have ever bred and later died out.

The Southampton population has increased since the 1950s. It is though that this is because of the local extinction of the competing species Mya arenaria in the estuary due to the cold winter of 1947, and M. mercenaria occupied the new niche. The estuary also has favourable conditions for the little-neck clam, and this is thought to be the primary reason for the success of the original colonisation. The estuary has low salinity levels and soft substrates, perfect for the little-neck clam, as well as rather uniform temperatures due to the cool water discharge pipe of the power stations close by. One interesting point to note about the breeding temperature of M. mercenaria is that in the Southampton Water, it is able to spawn at 17°C-19°C (3°C-4°C lower than other populations). The populations are also found in areas of elevated temperatures through heated industrial discharges are likely to favour the spread of this species in British waters, especially where the temperature required for reproduction is reached.

With regards to the description of M. mercenaria, it has a thick shell, roughly triangular in shape. The individuals are light brown to grey in colour with a violet border and often with varying concentric bands on the shell. These bands are conspicuous and are closely spaced around the margins but more widely spaced around the umbo (hinge). The inner shell surface is shiny with a blue-purple tinge around the muscle scars. The shell itself consists of thin concentric ridges that are sharp and raised in early growth stages but worn away in older shells where they can grow up to 12cm in length. Other identifying markers include the teeth on the valve (they have 3) and the anatomy of the internal, or ‘fleshy’, part of the animal. The exhalent and inhalant siphons are joined with a fringe of tentacles that surround the inhalant siphon. The siphons themselves are yellow/brown/orange at the ends and are often streaked dark brown or opaque white. The foot itself is large and white in colour.

You have to remember that this species was introduced on purpose for commerce, however this does not seem to have adversely affect other commercial species. M. mercenaria has actually supported a well-functioning fishery from the 1960s until the present day. However, it is not known how long the species will continue to survive current fishing pressures as lately the fishery has been severely depleted. This depletion is primarily due to poor spatfall but it is thought that this may also be due to the large numbers taken and physical damage to the environment. The species is not actively controlled by any organisation although, in recent years, the population has been severely depleted by the fishery.