The species has a high reproductive rate, producing quadruplets and living for twenty years. Individuals can also delay implantation of a fertilised egg during times of stress. 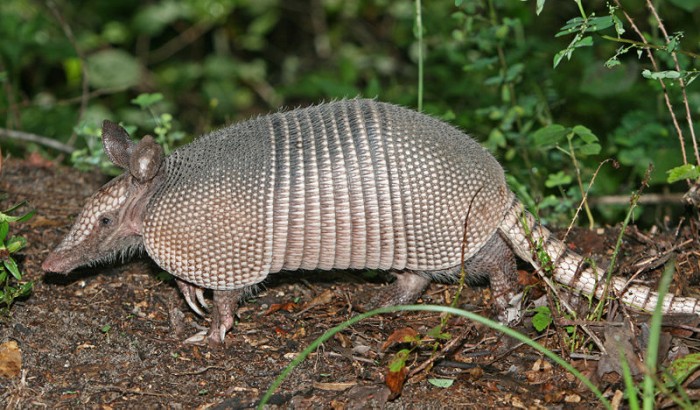 Image: By http://www.birdphotos.com (Own work) [CC-BY-3.0 (http://creativecommons.org/licenses/by/3.0)], via Wikimedia Commons

Migrations of species northwards, to areas previously thought unsuitable,  are becoming more common. Red foxes are encroaching on Arctic fox territories, and grizzly bears on polar bear territories. In the United States the nine-banded armadillo (Dasypus novemcinctus) is among the documented species joining this great migration. The range expansion has been remarkably quick; nearly ten times the expected rate for a mammal, and is thought to be due in part to climate change.

The species’ history sheds some light on its rapid expansion. D. novemcinctus was not found in the States before 1850, because there were barriers to its dispersal. These included the Rio Grande, which is a wide river. Although armadillos can swim there was no suitable habitat once individuals had crossed the river. They like scrub or woodland which provide cover. At the time, fire management meant the area consisted predominately of prairie grasses. Hunting from humans, and predation by wolves and panthers also prevented a viable population establishing itself. However, after settlers had inhabited Texas the barriers were reduced, including the physical barrier posed by the Rio Grande. Increased river travel by humans meant increased translocation of D. novemcinctus, which was still a food source. The increased population density on the Texan side led to range expansion. This was aided by humans, both accidentally and intentionally, including stowaways on cattle trains and zoo and circus escapees.

So why is D. novemcinctus able to colonise areas so quickly? The species has a high reproductive rate, producing quadruplets and living for twenty years. Individuals can also delay implantation of a fertilised egg during times of stress.

However, their expansion is limited by temperature and precipitation constraints; they need a constant water source and cannot survive in areas where the mean January temperature is below -2°C. Despite these limitations, it is predicted they could live in New York and even Canada if appropriate translocation occurs.

Milder winters in the states are enabling southern species to invade northern ecosystems bringing worries that native species will be displaced and ecosystems disrupted. Although the rapid expansion of D. novemcinctus is unusual, further climate change is imminent and invasions from the South are likely to increase, each bringing its own ecological and economical impacts.