A Focus on Black Grouse Declines

The historic decline of the Black Grouse is well documented. An all too familiar tale of human ignorance, inactivity and the resulting decline of an iconic species.

By James Common on 9th August 2016 in Bird Conservation, Ecology 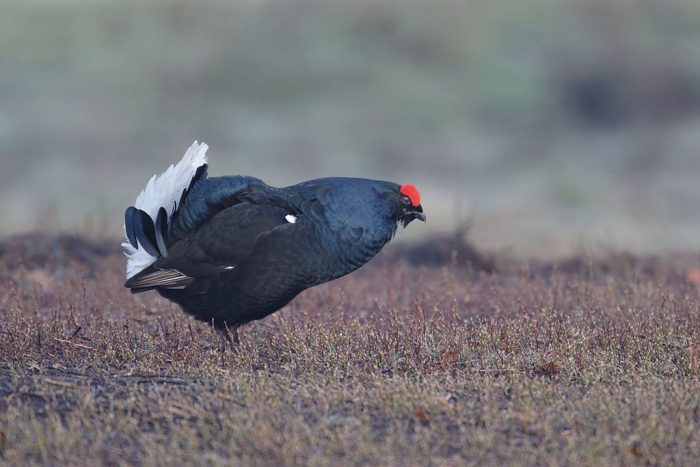 The Black Grouse (Tetrao tetrix) is, by far, my favourite upland bird. A vision of unrivalled beauty, clad in flamboyant plumage and boasting a surprisingly timid demeanour. A species which, each year, leks its way into my heart as I make my annual pilgrimage to view the birds in their upland realm. Usually at RSPB Geltsdale, or, should the mood take me, the Scottish Highlands. Grey hen or black cock, it matters not, and many it seems share my affection for the bubbly jock – a local nickname bestowed upon it in parts of Scotland, in reference to the bubbling call of amorous males. And many, like me, seek them out whenever possible. Ventures that sadly, increasingly result in failure, as like many other British species, the Black Grouse finds itself ensnared in a downwards spiral. Our population of this charismatic game bird, plummeting, year on year. A historic decline that continues until this day, and one that I thought I would look atin this post.

A History of Declines

The historic decline of the Black Grouse is well documented. An all too familiar tale of human ignorance, inactivity and the resulting decline of an iconic species.

Once a familiar sight across much of Britain, present in quantities enough to sustain shooting on a level wholly unheard of today, grouse populations began to plummet during the latter half of the 19th century. Across much of the species range within the UK. Remaining somewhat numerous until the 1970’s, where a rough estimate put their numbers at somewhere in the region of 10,000 to 100,000 birds. Though it is thought that the real number fell well within the lower portion of this range. The species, subject to a 28% reduction in range between 1968 and 1988 alone.

Once a familiar sight across much of Britain, present in quantities enough to sustain shooting on a level wholly unheard of today, grouse populations began to plummet during the latter half of the 19th century, across much of its range within the UK. Remaining somewhat numerous until the 1970’s, where a rough estimate put their numbers at somewhere in the region of 10,000 to 100,000 birds – though this is thought that the real number fell well within the lower portion of this range. The species, subject to a 28% reduction in range between 1968 and 1988.

Since the time of these early surveys, grouse populations have continued to free fall, until fairly recently. The overall population of this iconic species declining from an estimated 25,000 lekking males in 1990, to just 6510 in 1996 (SNH, 2016). With an average rate of decline of 10% per year. Mirroring regional trends across the UK: with only 139 lekking males recorded in Wales during 1997, and widespread declines across parts of Scotland. Though it was the English population that suffered the most. With recent regional extinctions in Staffordshire and Lancashire and the complete failure to find any remaining birds in areas subject to previous extinctions. Including the New Forest and Exmoor, where grouse persisted until the 1960’s. Indeed, some estimates suggest that, at present, the Black Grouse population in some areas is continuing to fall each year, with annual declines of between 10-40% observed.

It should be noted, that Black Grouse in some areas have recovered somewhat in recent times. With surveys in 2002 and 2006 showing an increase in numbers in Northern England, from 773 males to 1029, and exceptional increases observed in the Yorkshire dales between 1998 and 2006. The latter increase estimated to stand somewhere in the region of 128%. Though, in more recent years, this population seems to have declined, once more, to within the region of 700 males.

More recently still, the Welsh grouse population increased to around 328 birds, with similar (yet isolated) increases observed in parts of Scotland, including Dumfries and Galloway. Despite these recent gains, however, the Black Grouse remains one of Britains most threatened birds species and a BAP (Biodiversity Action Plan) priority species. With the British population of increasing significance, given the wider declines taking place across Europe – where the species has decreased catastrophically across much of its known range.

Causes of the Decline

There are many catalysts for the decline of the Black Grouse. With habitat loss, perhaps the most pressing. And overgrazing, by both sheep and deer, thought to be a major contributing factor. Specifically, across areas of heath and grassland favoured by Black Grouse – where increasing numbers of ungulates remove much of the cover grouse broods utilise to feed. The loss of botanical elements such as Bilberry and birch scrub proving particularly  detrimental. Elsewhere, agricultural intensification across formerly arable areas is also thought to have removed an important food source for some grouse populations. And a subsequent loss of invertebrate life in some places is also thought to be a contributing factor – with insects of particular importance to grouse chicks. (See here for more information).

Habitat loss and degradation also extend to wooded areas favoured by Black Grouse, particularly conifer plantations. Many of which, until fairly recently, provided a refuge for the species. It is thought that young plantations, such as those planted within the second half of the 20th century, typically benefit grouse numbers, supporting a dense understory of heather and Bilberry. These plantations typically mature within 10-15 years, however, thus shading out this understory and removing both nesting habitat and a food source for grouse. An increasingly common trend in current times as timber plantations, planted in past decades, reach fruition. While conifer plantations, in their infancy, may bolster populations, it is accepted that, overall, afforestation may have contributed to an overall decrease in habitat suitability for Black Grouse.

Habitat fragmentation is likely also a factor in recent declines, with many grouse populations now hemmed up in areas that favour their needs. And separated, sometimes by great distances, from other populations. This reduces genetic diversity, leads to inbreeding and, over-all, means that the most isolated colonies are unlikely to persist much longer. (SNH, 2016).

In addition to habitat loss, it is also thought that shooting could have played a part in the decline of the Black Grouse. Shooting which, despite low numbers, continues until this day – between the 20th of August and the 10th of December each year. While most estates that still possess Black Grouse do not harbour numbers enough to sustain driven shoots, of the kind seen in previous centuries, a number of birds are shot each year on walk-up days. And more still are killed accidentally, due to mistaken identity, often during driven shoots for Red Grouse. Particularly greyhens, which may appear somewhat similar to the untrained eye. To combat this, some estates now impose a fine for any Black grouse killed in this way, though these are likely not enough to provide a serious deterrent. Illegal shooting, for trophy birds, has also been reported at Black Grouse leks in recent years and is seen as serious wildlife crime.

In addition to the factors listed above, a number of other issues have been linked to the decline of this iconic bird. With predation foremost among them. Indeed, species such as Fox, Stoat and Carrion Crow are thought to have a profound impact on grouse numbers in some places, while links have also been found to Pine Marten. Particularly during studies in Northern Europe which showed grouse numbers to increase immediately after the removal of martens (Angelstam 1984; Willebrand 1988). This is likely the reason that some  of our healthiest grouse populations now persist on moorland estates – where such predators (with the exception of martens) are vigorously controlled.

Other issues associated with the collapse of the Black Grouse population includes deer fencing – with which the birds collide with some frequency – and weather. And it is clear, that despite recent gains, and the tireless work of conservation bodies, more must be done to bring this species back from the brink. With the shooting of “black game” becoming increasingly rare and habitat slowly being reinstated, there may well be hope for the future. And I, for one, long for the day that the bubbly jock once more roams the length and breadth of upland Britain.Optimistic? Perhaps…

For more from James, you can follow him @CommonByNature and check out his personal blog at: commonbynature.co.uk