Home › Articles & Blogs › An A-Z of British Birds, C is for Chough

An A-Z of British Birds, C is for Chough

Choughs are spectacular birds. British birdlife would be much the poorer without them. 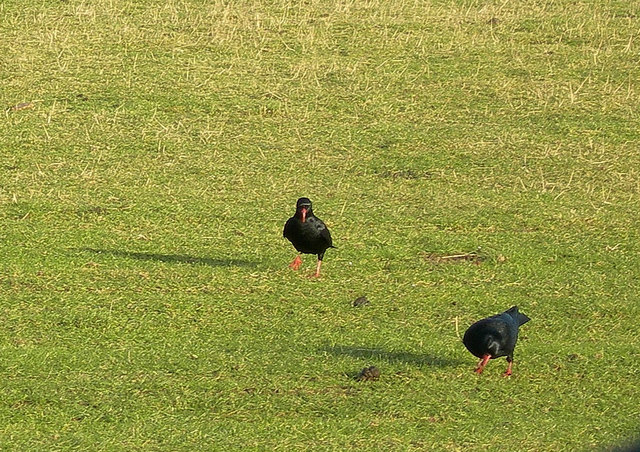 This week’s birds are woven together by grass – to varying degrees and in differing ways, all of them depend on management of grassland habitats.  To the extent, in fact, that where farming ceases, the birds will vanish too. Consider the magical red-billed chough. When grazing livestock were withdrawn from their cliff top homes  in the southwest, and rabbits were struck down by disease, the short grass habitats choughs depend on to search for food were soon replaced by an impenetrable tangle of scrub. With no suitable swards in sight, Cornwall lost its national bird. Only since the rabbits returned, followed by the odd ambitious conservationist promoting cliff top grazing (now implemented with the help of landowners), have the choughs come back to Cornwall – famously doing so of their own accord in 2001.

And choughs are spectacular birds. British birdlife would be much the poorer without them. My recommendation of the week is to go to a suitable site on the west coast of Britain later this year (the Pembrokeshire coast is very good) and enjoy their acrobatic wheeling and evocative, powerful calls echoing from the cliff face.  Perhaps stop off and see cirl buntings in their Devon stronghold on the way: another bird owing its English existence to a partnership between conservation and farming. They like their grassland insect-rich, complemented by seeds and spilt grain in the winter, and special management schemes have been implemented to provide both of those things to the surviving population. For shame, I haven’t ever seen one myself, but I promise that as a bunting fan they’re near the top of my wish list.

Alternatively, head to south-western Scotland, where, especially in the southern Hebrides, you’ll find not just choughs but the elusive corncrake. Hearing one is very easy: their call is very distinctive, like a comb dragged across a piece of paper, and is given both day and night. Seeing one is, I’m assured, near impossible to do, since they spend their days concealed in tall vegetation. Mowing that long grass, especially if done too early, destroys corncrake nesting habitat and indeed the nests and chicks themselves. ‘Corncrake Friendly Mowing’ leaves some suitably tall areas of grass in place throughout the breeding season, or mows carefully in patches, allowing chicks to run from cover to cover.

Trust between the farming and conservation communities is occasionally in short supply, but these special birds demonstrate how the relationship can work to everyone’s advantage: birds included. Happily there are plenty of other schemes similar to the ones mentioned above, but with more than 70% of Britain managed as farmland, we need more. These three in particular remind us that at its most successful, environmental stewardship is carefully tailored to both provide the ecological needs of a target species, and to be workable and rewarding for farmers. It will then, ultimately, be very good news for birders like me too.