R is for Raven

When I first started my own birding adventures, ravens were still not easy to find, and only partially through inexperience (ID tips in a nutshell: look for a buzzard-sized, flying black cross with a wedge-shaped tail and a guttural croak for a call). 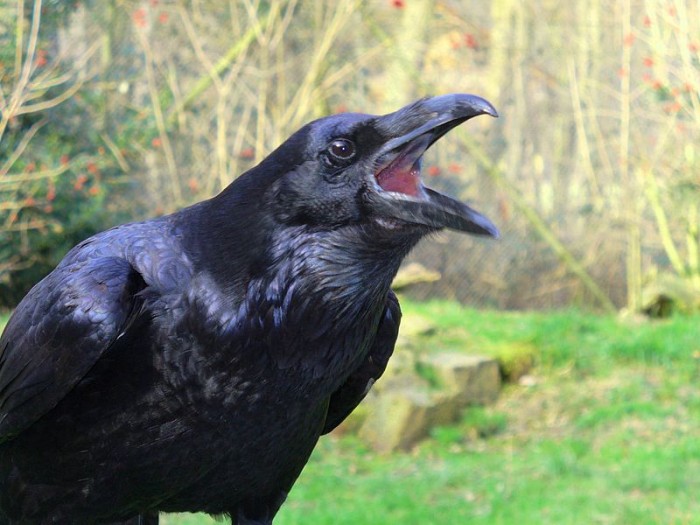 Few birds have more myth and folklore wrapped around them than ravens. In western culture, they’re a portentous emblem of death whether seen as the souls of the damned or as Edgar Allan Poe’s notorious midnight visitor. The plural noun for ravens is an ‘unkindness’. Combine this unsavoury reputation with the real bird’s remarkably indiscriminate taste, and perhaps it is no wonder ravens found themselves wholly unwelcome in much of Britain just a few hundred years ago. I recently read W.H.Hudson’s 1913 book ‘Adventures Among Birds’, which but for the slightly old-fashioned prose and occasionally jarring anthropomorphism is strikingly up-to-date in tone for a book published almost a century ago. In one chapter he tells the story of the very last breeding ravens in one small Hampshire village, eventually persecuted to extinction – symbolic of their near-total eradication from lowland England.

Not easy to find

When I first started my own birding adventures, ravens were still not easy to find, and only partially through inexperience (ID tips in a nutshell: look for a buzzard-sized, flying black cross with a wedge-shaped tail and a guttural croak for a call). There were (and still are) a good few in the New Forest, but otherwise I’d see them only through heading north and west on holiday. It’s still true that uplands and rocky coasts are their stronghold, and I’ve never seen a bird as resonant of its setting as ravens displaying along a knife-edge ridge on the Lake District fells, but in the last decade or so ravens have been on the increase in all of the southeastern lowland counties. In Hudson’s day, they would have been unknown on the Hampshire Downs; now I’d be disappointed to spend a day walking there without hearing the sombre, weighty croak of the raven.

Given Hudson’s modern sensibilities – he’d much sooner watch a bird than shoot it – I wonder if he’d view the raven’s return as a mark of progress. No doubt society’s attitude to nature has a long way to improve yet. With some notable and lamentable exceptions, we may have got better at protecting ‘charismatic megafauna’ in Britain, but modern life is proving disastrous for the little things on which we and they depend.

Nonetheless, maybe ravens should no longer symbolise death, but life, a sign that it is possible for humans and big, powerful, intelligent animals to share a space, even one as densely inhabited and heavily worked as the British countryside. So for me, the fall of this particular small Kingdom would not come about if the tame, wing-clipped ravens at the Tower waddled off and got lost in London’s streets; after all, the extent to which they are protected there feels like cheating. No, it’s if the free-living, free-flying ravens began to disappear that we’d truly be in trouble, for we’d have forgotten once again how to live alongside the wild.