E is for Egret

Little egrets, a bright white, medium-sized bird of the heron family, only started breeding here in 1996, but since have expanded so rapidly their population growth is measured in the multiple hundreds of per cent. 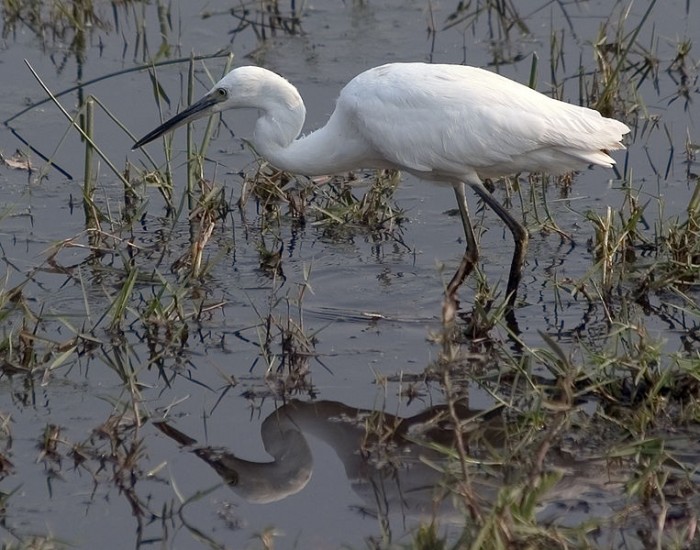 Prior to the late 1980s, any egret in Britain was a rarity. A real binocular magnet, in fact, drawing birders from far and wide. Which may surprise you if, like me, you’ve done most of your birding in the last decade and your casual memory for birds seen doesn’t quite stretch back to those distant primary school years. Little egrets, a bright white, medium-sized bird of the heron family, only started breeding here in 1996, but since have expanded so rapidly their population growth is measured in the multiple hundreds of per cent. As a result, for ‘new generation’ birders the little egret has almost always been amongst the species we expect to see quite easily in any given year – most likely many times, especially for those of us lucky enough to live near extensive wetland habitats.

For fans of egrets, there’s more good news: the little egret is increasingly being joined by two others, cattle and great white egrets. All three are essentially white herons by appearance – but, fortunately, telling them apart is relatively simple with a little practice. Cattle egrets, which joined little egrets as a UK breeding species in 2008, are smaller, squat birds, with a somewhat hunched posture. As their name suggests, they often associate with cattle or other livestock, busily feeding on insects disturbed by the cows’ passage through a field. If you think you might be looking at a cattle egret, also check the beak – it should be yellow, as opposed to the black of a little egret; shorter and stubbier too. Great white egrets also have a mostly yellow beak but are much bigger than the other two species, roughly equivalent to a grey heron in size, with a long elegant neck and legs. They’re most often here to overwinter, and can be surprisingly secretive for a large, all-white bird, but I’ve also seen one in July down on the Kent coast: perhaps they may yet join their cousins as a breeding species.

So these are conservation successes, resplendently beautiful newcomers to be celebrated and cherished. Right? Well, almost, and in the future the wetlands of Britain may well become more important for these and other herons with distributions that were once much more southerly. And that’s a clue to the silver lining to today’s happy egret cloud: climate change is likely to have played a big part in the expansion of the egrets northwards to our shores. Unfortunately this means that at the other end of the country, or in upland areas, there may well be, and already are, many losers. So whilst I don’t for once suggest we refrain from enjoying the egrets’ beauty – far from it, I think they’re fantastic and well worth celebrating – it probably wouldn’t hurt to also take from their presence a reminder that climate change is happening, and is likely to bring with it many more changes to our avifauna in the coming decades. Not all of them will be as welcome.