F is for Fieldfare

They’re one of the two thrush species which visit Britain in large numbers for the autumn and winter, alongside the handsome and perhaps better known redwing.

By Chris Foster on 2nd April 2012 in A to Z of British Birds, Bird Conservation 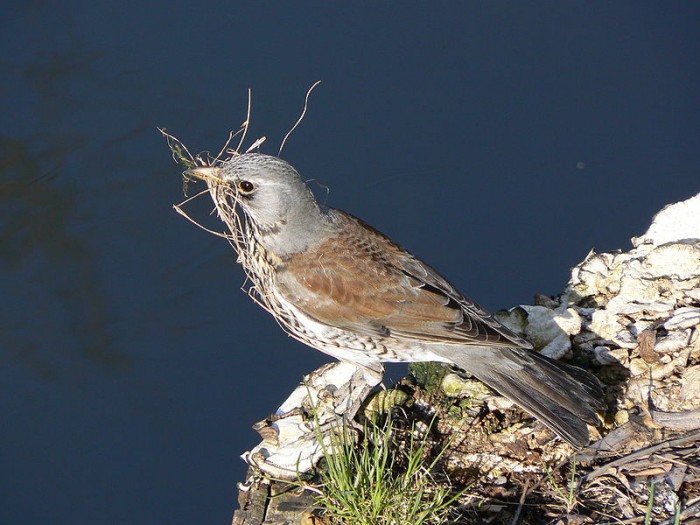 I grew particularly fond of the fieldfare whilst volunteering as a warden at the RSPB’s Otmoor reserve in Oxfordshire.  As I went about my rounds, flocks of tens or sometimes even hundreds would rise one by one from the hedgerows and lines of trees alongside the path, their harsh and wild cries (a resounding ‘chack’, often given in threes: ‘chack-chack-chack’) perfectly evocative of the often bleak and wintry views across the reserve. This past winter I spent a lot of time birding in open countryside in Hampshire, and again fieldfares were often numerous – moving ahead of me in numbers along almost every hedgerow and byway. They’re one of the two thrush species which visit Britain in large numbers for the autumn and winter, alongside the handsome and perhaps better known redwing. Whilst lacking that bird’s smart red under-wing and bright eyebrow, fieldfares are well marked and still colourful; their slate-grey head, nape and rump are particularly distinctive.

But why write about a bird which will soon be leaving us again, save for a tiny handful of breeding birds in the Scottish Highlands? Well, partially because I don’t control the order of the alphabet, but also because just last week I heard what will probably be my last noisy ‘chack’ until October. It came on a warm, sunny afternoon that I mostly spent photographing butterflies and spring flowers – very much a day on which nature was crossing over from one season to the next, but with the fieldfare’s strident voice serving as a reminder that autumn and then winter will soon enough come round again.

When the fieldfares do return, the BTO hopes that birders up and down Britain will be more than usually ready for them: this year sees the commencement of a new Wintering Thrushes Survey. The aim is to better understand the overwintering habits and preferences of thrushes in the British Isles: three residents, blackbirds, song and mistle thrushes; as well as fieldfares and redwings. For the visitors, there are a lot of unknowns concerning their cross country movement during the winter, after initially arriving on the east coast. What factors drive their distribution, and the timing of their departure in spring? Perhaps the results of the survey will shed a little more light on the ultimate winter wandering thrush, the fieldfare, and help to conserve the British countryside’s status as a winter haven for this star species.