This species is restricted to riparian areas in Russia, China, Japan and possibly North Korea, and it now has been revealed that they are a key indicator of the health of the primary forests in which they live. 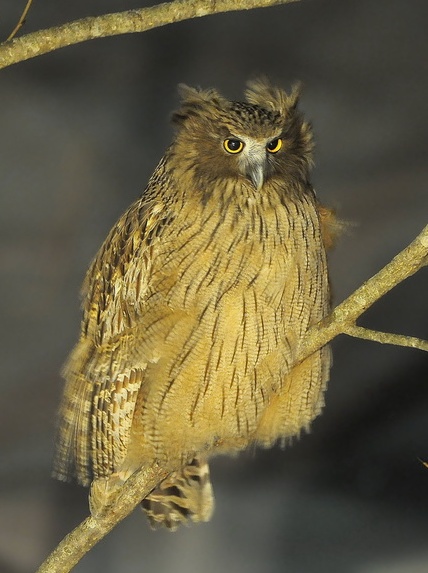 The Blakiston’s Fish Owl is the largest owl in the world. Listed as endangered by the IUCN, it is also one of the rarest. This species is restricted to riparian areas in Russia, China, Japan and possibly North Korea, and it now has been revealed that they are a key indicator of the health of the primary forests in which they live.

Published last month in the journal Oryx, scientists from the Wildlife Conservation Society, the University of Minnesota and the Russian Academy of Sciences braved the harsh weather of the Russian Far East to study these little known owls. They surveyed nesting habitat over a 20,213 sq km (7,804 sq mile) area in Primorye to discover more about their foraging and nesting characteristics.

Their findings show that the primary distinguishing features of both nesting and foraging sites were large old trees and riparian old-growth forest. The Blakiston’s Fish Owl relies upon giant old-growth forests along streams as they support healthy populations of their favourite prey – salmon. When the huge trees topple naturally into adjacent streams, they disrupt the flow of water causing the river to flow around, over and under these new obstacles. The result is what the scientists call stream channel complexity, a combination of shallow, fast-moving channels and deep, slow-moving backwaters which provide important microhabitats the salmon need for various stages of their development. In addition, the rivers often have warm springs which help maintain open water in winter, allowing the owls to hunt their prey. The large trees also provide breeding cavities that are large enough for the owl to use. Standing 2.5ft (75cm) tall, weighing more than 10 pounds (4.6kg) and with a wingspan of 2m (6ft), these birds need big trees with big tree holes.

It is therefore essential to conserve the old-growth forests in order to conserve the Blakiston’s Fish Owl, and also a large number of other species that live there too, namely eight species of salmon and trout, 12 other species of owl, and mammals such as the Wild Boar, Asiatic Black Bear and the Siberian Tiger. This new knowledge of the Blakiston’s Fish Owl (a species extremely hard to study due to its remote location, sparsely populated with people and with poor road access) proves that it is a clear indicator of the health of the forests, rivers and salmon populations.

Sadly, logging and other human activities have encroached into the owl’s habitat in recent decades. But even though some people may not care about the owls and other wildlife, they do care about money. The salmon in Primorye are commercially valuable, so conservationists can now make a case for reduced logging in riparian zones in order to preserve these populations, which in turn will help the endangered birds and mammals that rely so heavily on the remote forest.