Over the past 300 years, 79 plants have been confirmed extinct from three of the world’s biodiversity hotspots located in South Africa – the Cape Floristic Region, the Succulent Karoo, and the Maputuland-Pondoland-Albany corridor. 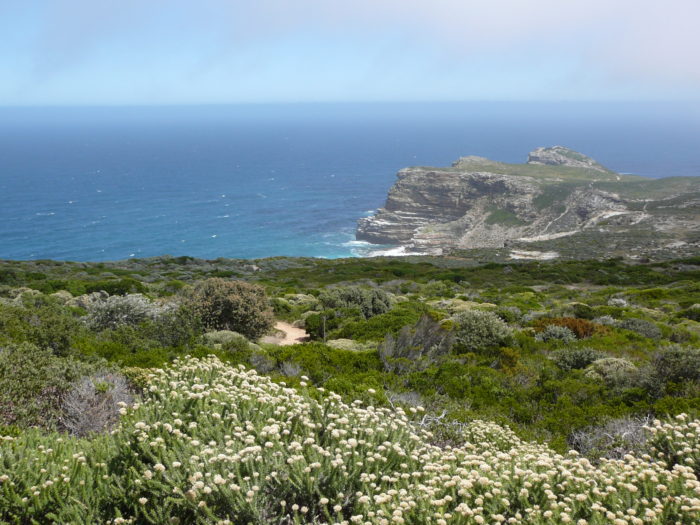 Biodiversity hotspots are areas that harbour exceptionally high numbers of unique species, but at the same time they are under severe threat from human disturbance. South Africa is remarkable in that, for a relatively small country, it is home to three of these hotspots.

The Cape Floristic Region is located near the southern tip of South Africa. It is the smallest of the six recognised floral kingdoms of the world, and is home to over 9,000 vascular plant species, of which 69% are endemic. Much of this diversity is associated with the fynbos biome, a Mediterranean-type, fire-prone shrubland. The economical worth of fynbos biodiversity, based on harvests of fynbos products (e.g. wildflowers) and eco-tourism, is estimated to be in the region of R77 million a year, so has high economic value as well as biological value.

The Succulent Karoo stretches along the coastal strip of southwestern Namibia and South Africa’s Northern Cape Province, and extends inland into the uplands of South Africa’s Western Cape Province. The area is notable for the world’s richest flora of succulent plants, and harbours about one-third of the world’s approximately 10,000 succulent species, 40% of which are endemic.

The Maputuland-Pondoland-Albany corridor is situated near the south-eastern coast of Africa, occupying an area between the Great Escarpment and the Indian Ocean. The vegetation cover is mainly composed of forests, shrubland, bushveld and meadows. About 80% of the remaining forests of South Africa occur in this region, and nearly 600 species of trees are represented here, the highest diversity of any temperate forest in the world.

According to a new study published in the journal Current Biology, the extinctions in these three hotspots represent a shocking 45.4% of all known plant extinctions from 10 of the world’s 36 biodiversity hotspots.

An international team of researchers, led by Prof Jaco Le Roux and Dr Heidi Hirsch, affiliated with the Centre for Invasion Biology (CIB) at Stellenbosch University (SU), analysed a comprehensive dataset of 291 plant extinctions since 1700 in ten biodiversity hotspots and six coldspots, covering about 15% of Earth’s land surface.

The main drivers for extinctions in South Africa were found to be agriculture (49.4%), urbanisation (38%) and invasive species (22%).

The results of their analysis show that, since the 1990s, extinction rates for plants over the past 300 years appear to have settled at about 1.26 extinctions per year. At its peak, however, it was at least 350 times that of historical background rates during pre-human times.

However, these findings stand in sharp contrast to predictions from other studies that as much as half of Earth’s estimated 390,000 plant species may disappear within the remainder of this century.

“This would translate into more than 49,000 extinctions in the regions we studied over the next 80 years, which seems unlikely, bar a cataclysmic event such as an asteroid strike!” they argue.

Prof Le Roux says regional datasets provide valuable data to make general inferences around plant extinctions and the drivers underlying these extinctions. There are, however, still many regions in the world without a Red List of Plants, or with outdated lists, such as Madagascar and Hawaii. These ‘hottest’ of hotspots were therefore not included in their analysis.

“A lack of up-to-date lists prevents us from gaining a more complete and precise picture of what we are losing, and at exactly what rate,” Dr Hirsch adds.

They believe the only way to better understand the magnitude of the extinction crisis faced by plants, and biodiversity in general, is to urgently initiate regional or at least country-level biodiversity assessments.

“While our study suggests that modern plant extinctions are relatively low, it is important to keep in mind that plants are exceptionally good at ‘hanging in there’. Some of them are among the longest living organisms on earth today and many can persist in low densities, even under prolonged periods of unfavourable environmental conditions. A recent report, for example, indicated that 431 plant species, previously thought to be extinct, have been rediscovered,” Le Roux explains. This means that many plant species may technically not be extinct, even though they only have one or a few living individuals remaining in the wild.

The authors emphasise: “We need comprehensive and up-to-date datasets to make informative forecasts about the future and preservation of Earth’s flora.”

The first recorded species to be lost to forestry in South Africa in the 1700s was a type of fountainbush that used to grow next to streams in the Tulbagh region – Psoralea cataracta. In 2008 it was listed as extinct on the Red List of South African Plants.

The next species to be confirmed extinct was one of the African daisies, Osteospermum hirsutum, last seen in 1775, followed by the honeybush, Cyclopia laxiflora, last seen around 1800. The reasons for their extinction are listed as agriculture, forestry and urbanisation.

More recently in 2012, an extremely rare species of vygie, Jordaaniella anemoniflora, was declared extinct in the wild after losing its battle against sprawling urbanisation and coastal developments around Strand, Macassar and Hermanus.

For the Maputuland-Pondoland-Albany corridor, twenty species have been confirmed extinct, mainly due to agriculture and utilisation, and include Adenia natalensis (1865), Barleria natalensis (1890) and more recently, Pleiospilos simulans (2007).

In conclusion, the researchers emphasise that biodiversity loss, together with climate change, are the biggest threats faced by humanity: “Along with habitat destruction, the effects of climate change are expected to be particularly severe on those plants not capable of dispersing their seeds over long distances.”