Resurgence of the World’s Rarest Penguin

A new study has revealed that shifting trade winds and ocean currents have resulted in a doubling of their population over the past 30 years. 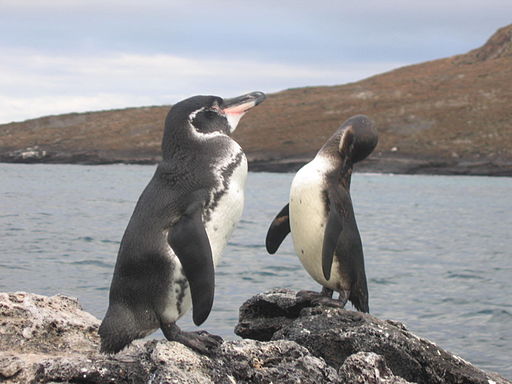 The Galapagos Islands, a chain of islands 600 miles wide west of mainland Ecuador, are home to the only species of penguin in the Northern Hemisphere. The Galapagos penguin is also world’s rarest penguin. Added to the endangered species list in 2000, their numbers have plummeted in recent decades. The decline started in the early 1980s when a strong El Nino – a time when sea surface temperatures in the tropical Pacific Ocean are unusually warm – caused populations to fall from 2,000 to less than 500 individuals. Dogs, cats and rates introduced to the islands also attacked penguins, disturbed their nests and brought new diseases.

However, a new study in Geophysical Research Letters has revealed that shifting trade winds and ocean currents have resulted in a doubling of their population over the past 30 years. Most Galapagos penguins live on the archipelago’s westernmost islands, Isabela and Fernandina, where they feed on fish that live in the cold pool of water on the islands’ southwestern coasts. The cold pool is fed by an ocean current called the Equatorial Undercurrent which flows towards the islands from the west. When the current runs into Isabela and Fernandina, water surges upwards and brings cold, nutrient-rich water to the surface. Algae and fish numbers have been bolstered, and penguin numbers have grown to more than 1,000 birds by 2014.

The reason for the Equatorial Undercurrent’s movement 35 km (22 miles) north is shifts in wind currents, possibly due to climate change and natural variability. Climate change could continue to shift wind patterns and ocean currents, expand the cold pool even further and increase fish populations. Penguins, as well as other animals like fur seals and marine iguanas that feed and reproduce near the cold waters, may continue to rise in numbers as the coasts become even more habitable.

Yet wind and ocean currents could change again and return to earlier conditions, leading to a decline in penguin populations. “The penguins are the innocent bystanders experiencing feast or famine depending on what the Equatorial Undercurrent is doing from year to year,” said lead author and climate scientist Kristopher Karnauskas.

The new findings may help inform conservation efforts to save the Galapagos penguin. Their population growth could be supported by focusing on the northern coasts of the islands, as well as the expansion of marine protected areas north to where the birds are now feeding and breeding.

The vast majority of marine organisms will be negatively affected by the rise in ocean temperatures and acidification across the world, caused by climate change. Nevertheless, the Galapagos penguin seems to be benefiting, for now.  Karnauskas says: “With climate change, there are a lot of new and increasing stresses on ecosystems, but biology sometimes surprises us. There might be places – little outposts – where ecosystems might thrive just by coincidence.”