The world’s fastest animal is racing towards extinction. New research has revealed that just 7,100 individuals remain and may be lost forever if urgent conservation action is not taken. 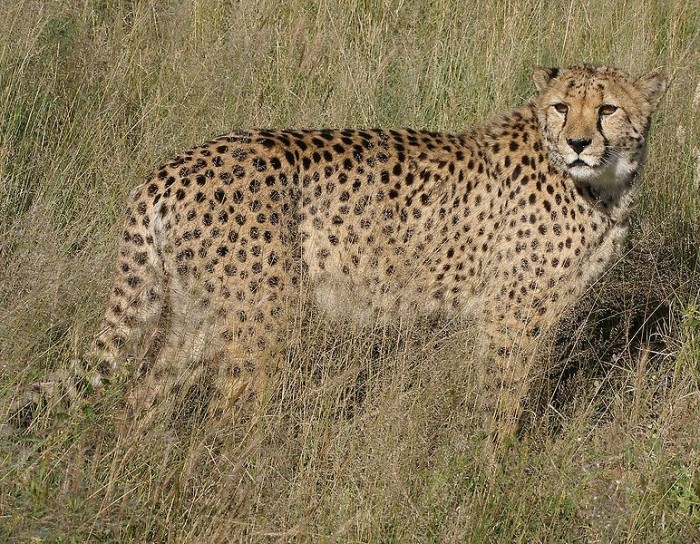 Image: By Falense (Own work) [GFDL (http://www.gnu.org/copyleft/fdl.html) or CC-BY-SA-3.0 (http://creativecommons.org/licenses/by-sa/3.0/)], via Wikimedia Commons

The world’s fastest land animal, the cheetah, is heading for extinction as a new study has revealed that their numbers are crashing. Scientists are calling for their status to be upgraded to ‘endangered’ as the species could be lost forever unless urgent and wide scale conservation action is taken.

The study, published in the journal Proceedings of the National Academy of Sciences, represents the best available estimate for the cheetah to date and shows that they now number just 7,100 individuals. It was led by the Zoological Society of London, cat conservation organisation Panthera, and the Wildlife Conservation Society.

Lead author Dr Sarah Durant said: “This study represents the most comprehensive analysis of cheetah status to date. Given the secretive nature of this elusive cat, it has been difficult to gather hard information on the species, leading to its plight being overlooked. Our findings show that the large space requirements for cheetah, coupled with the complex range of threats faced by the species in the wild, mean that it is likely to be much more vulnerable to extinction than was previously thought.”

The cheetah has been driven out of 91% of its historic range, and hardest hit have been Asiatic populations – fewer than 50 individuals remain in one isolated area of Iran. The degree of persecution cheetahs face inside and outside protected areas has been largely unrecognised.

Even within guarded parks and reserves, cheetahs are unable to escape the threat of human-wildlife conflict, overhunting by people causing a lack of prey animals, habitat loss and illegal trafficking of cheetah parts as well as whole animals for the exotic pet trade. But as one of the world’s most wide-ranging carnivores, 77% of their habitat falls outside of protected areas. This is where weaker law enforcement increases cheetahs ‘ vulnerability to human pressures. Zimbabwe’s cheetah population has fallen from 1,200 to no more than 170 individuals in just 16 years (a loss of 85% of the country’s cheetahs) largely due to pressure on wildlife and habitats outside protected areas.

Scientists are now calling for the cheetah to be uplisted from ‘vulnerable’ to ‘endangered’ on the IUCN Red List. This would bring greater international conservation support, attention and prioritisation to the species. They also hope for a shift towards landscape-level conservation across national boundaries and an approach that incentivises local communities and governments to protect cheetahs.