Male and female iguanas on the tourist islands had higher uric acid levels, as a result of feeding on animal protein such as ground beef, provided by the tourists. Males had raised cholesterol concentrations, also as a result of meat in their diet.

By Alex Taylor on 19th December 2013 in World Conservation Issues 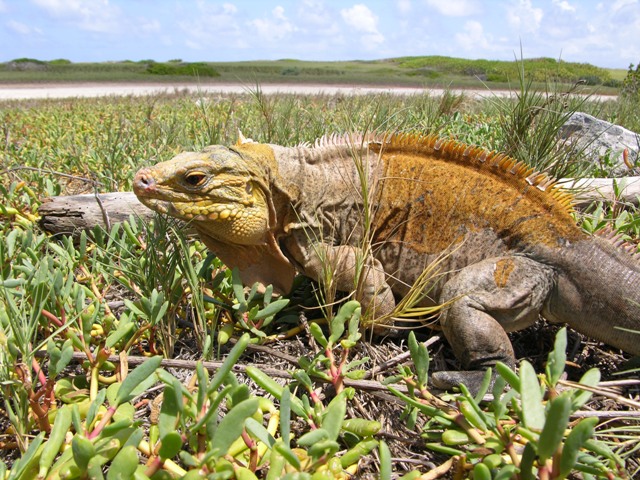 Eco-tourism helps conservation in many ways, including generating money and jobs for local communities, proving that animals are worth more alive than dead and raising awareness of the plight of biodiversity. Yet an increasingly common tourist activity is feeding wildlife, and a new study in the journal Conservation Physiology has shown that one species of iguana is suffering from the negative consequences.

Scientists from the John G Shedd Aquarium in Chicago studied the differences in the physiology and parasite infection rates between individual Bahamian rock iguanas on tourist-visited islands and those living on tourist-free islands. The results of blood and faecal samples showed that the two groups did not differ in body condition, but indicators for dietary nutrition were different.

The iguanas on the island visited, and fed, by tourists had higher levels of glucose and uric acid, and lower levels of potassium. This can be explained by the feeding habits of the iguanas, which predominately eat grapes provided by tour operators on a daily basis. Too much of this sugary fruit resulted in the iguanas having high concentrations of glucose in their blood. Grapes also contain 3-10 times less potassium than most common plants, the main diet of the tourist-free island iguanas which had higher levels of potassium in their blood. An over abundance of grapes also caused the iguanas fed by tourists to suffer from diarrhoea.

Male and female iguanas on the tourist islands had higher uric acid levels, as a result of feeding on animal protein such as ground beef, provided by the tourists. Males had raised cholesterol concentrations, also as a result of meat in their diet. Male iguanas were more impacted by the provisional food as they are more aggressive when feeding than females and ate more of it. Food provisioning on beaches by tourists has also encouraged the iguanas to spend more time foraging there rather than further inland, resulting in them eating more marine life. And these iguanas had a 100% endoparasitic infection rate.

The lead author of the study states that all of these factors “could have deleterious effects on long-term fitness and population stability.” This is bad news for the Bahamian rock iguanas, as they are already one of the world’s most endangered lizards thanks to habitat loss, egg collection, introduced mammals, illegal hunting and smuggling for the illegal pet trade. Tourist-feeding can lead to increased population density of endangered species, but ultimately may cause more harm. As well as the impacts on their health, unnaturally high densities of iguanas and excessive reliance of supplementary food will also be problematic if the feeding is stopped for any reason. In addition, plant community dynamics can be disrupted by changes to the iguanas’ feeding patterns.

It is perhaps unrealistic to completely stop feeding, so the scientists recommend providing pelleted iguana food, specially formulated to mitigate the impact of unhealthy food and giving them a more nutritionally balanced diet. Education campaigns may also help, as well as the removal of references about feeding iguanas from adverts.